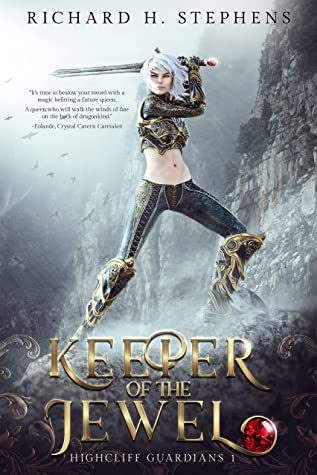 A young heir to the throne is sent away to be protected from a looming threat, but finds sins of the kingdom’s past may find their way back to her in author Richard H. Stephen’s “Keeper of the Jewel: Highcliff Guardians Epic Fantasy Series”, the first book in the Soul Forge Universe series.

Something evil lurks beneath the palace.

A phantasm from a darker past makes its presence known to Khae Wys, Queen of the Elves.

Braving the perils of a haunted tower, the queen seeks the counsel of the mysterious Fae, for only they can predict what is to come. A future that doesn’t bode well for her only living child.

In a desperate attempt to save the heir to the Willow Throne, Princess Ouderling is exiled to the only place capable of protecting her. Highcliff, the home of the coveted Crystal Cavern and the dragons that watch over it.

The Duke of Grim, however, has other plans for the princess.

I absolutely loved this book! The world-building was phenomenal, and the imagery the author infused into the narrative, (both literarily speaking and literally) was superb to see. The use of artwork throughout the book was an inspired choice, as the author was able to give readers a visual representation of the tone and quality of the characters that strengthened the emotional connection readers had for them.

I loved how complex and realistic the relationships and personalities of these fantasy characters felt. While I absolutely love fantasy-driven narratives, some novels can get so heavy with the fantasy elements that character choices and personalities can feel stuffy or disconnected in some way. Yet this author found a great way of making the characters either relatable or realistic enough for readers to recognize. Even protagonist Princess Ouderling perfectly represents the young woman who must undergo a heroic journey and face the past of her kingdom, but also holds that youthful sense of rebellion and need for an identity all her own, which will resonate greatly with younger readers especially.

A brilliant, entertaining, and amazingly haunting world of epic fantasy that readers won’t want to miss, author Richard H. Stevens’s “Keeper of the Jewel” is a must-read novel and the perfect start to a brand new fantasy series. What really was great to see was that this book was the first of a new series, but was set within an even greater series the author already has written. Yet the story felt fresh and was able to be enjoyed seamlessly by newcomers while still hitting great story strides with established lands and characters at the same time. It made for such a rich and powerful read. If you haven’t yet, be sure to grab your copy today!