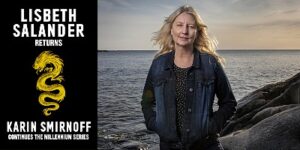 Alfred A. Knopf will publish the next three DRAGON TATTOO thrillers as a new trilogy written by Swedish bestselling author Karin Smirnoff. The announcement was made by Knopf EVP and Publisher, Reagan Arthur. Executive Editor Diana Miller acquired US rights from Quercus Books and Magdalena Hedlund at the Hedlund Agency, Stockholm, who is acting on behalf of the Stieg Larsson estate. For the first time, the series, which has sold more than 100 million copies worldwide, will be written and translated by a woman.

Karin Smirnoff is a bestselling author in her native Sweden where her books have sold more than 700,000 copies. She was born in Umeå, a small hamlet in northern Sweden, just a short drive south from where Stieg Larsson himself grew up. Later, Smirnoff’s family moved to Stockholm. She left that city at seventeen to travel, but the pull of the north was strong and she now lives on a farm near her birthplace, a property that has been owned by her family for decades. Smirnoff has hinted that the setting of the seventh Millennium novel may move from Stockholm to northern Sweden, where communities are facing rapid change due to increased business investment.

Karin Smirnoff says, “It feels almost solemn to write the sequel to Millennium. I said yes to the project without hesitation, even though it postpones my own ideas for new novels. It’s an exciting opportunity to independently create and make something new based on a unique fictional universe that is known worldwide. The Millennium books are classics in their genre, where the combination of unforgettable characters and the strong political and societal engagement still fascinates readers. I will continue to build on Stieg Larsson’s core themes, such as violence, abuse of power, and contemporary political currents.”

Magdalena Hedlund, the Larsson family’s representative and head of the Hedlund Agency, says: “To ask Karin Smirnoff to be the new Millennium author is a daring choice – but after our many conversations with her it also feels wonderfully right. We have long thought that a woman should now take the helm. The fact that Smirnoff comes from the same area of Northern Sweden as Stieg Larsson himself is another compelling aspect.”

“Lisbeth Salander’s arrival on the global literary scene in 2008 was the beginning of a worldwide publishing phenomenon,” says Arthur. “Fifteen years later, Karin Smirnoff is the perfect choice to create a new trilogy that will both delight readers and expand the brilliant universe and singular characters created by Stieg Larsson.”

Joakim Larsson, Stieg Larsson’s brother, says: “Karin Smirnoff has a rather unique literary voice in Sweden. She is driven by pathos for questions that you can find also in Stieg’s works and shares his background from northern Sweden. We eagerly anticipate thrilling and compelling new adventures of Salander and Blomkvist in the far north!”

“It’s tremendously exciting that Karin Smirnoff will be bringing Lisbeth Salander and Mikael Blomkvist back to readers around the world, who can now look forward to the return of these unforgettable literary creations,” says Miller. “I consider it a true privilege to continue Knopf’s proud association with Stieg Larsson’s groundbreaking work, from the moment when Sonny Mehta introduced the first Millennium books to American readers, carried forward so vibrantly by the novels written by David Lagercrantz, and I know Karin Smirnoff’s new installments in the series will be trailblazing in their own right.”