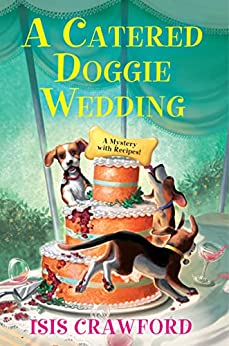 When Bernie and Libby Simmons, sisters and co-owners of A Little Taste of Heaven, are hired to cater a doggie wedding for a pair of posh golden retrievers, they wind up stepping into a fresh murder investigation!

At A Little Taste of Heaven, Bernie and Libby Simmons cater all sorts of affairs, from book clubs to bridal showers and everything in between. So when their counterman, Googie, asks them to cater a doggie wedding for his girlfriend Jenni’s eight-month-old golden retrievers, they jump on the opportunity. The reception, which will also serve as a grand opening for Jennie’s new doggie daycare center, is no small affair. Bertha and Ernie—the bride and groom—will be celebrating with more than a hundred guests, including the puppers’ pals and their people.

But all weddings, even shaggy shindigs, come with some drama. Not everyone in town is excited about the upcoming pup-tuials—or Jenni’s business. Someone is sending threatening messages to Bernie, Libby, and others in town, warning them to cancel the festivities. But when folks start dying under curious circumstances, Bernie and Libby know it’s up to them to untangle the leads and find the murderer before anyone else bites it. 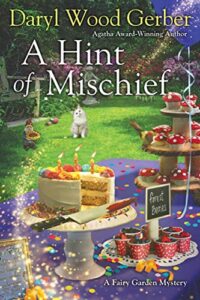 From Agatha Award-winning author Daryl Wood Gerber, the third in an enchantingly whimsical series featuring Courtney Kelly, the owner of a fairy-gardening and tea shop in Carmel, California. It’s a special place brimming with good vibes and the kind of magical assistance its proprietor will need to prepare for an old sorority sister’s birthday bash awhile solving a puzzling murder!

Courtney has thrown a few fairy garden parties—for kids. But if a local socialite is willing to dip into her trust fund for an old sorority sister’s fortieth birthday bash, Courtney will be there with bells on. To make the job even more appealing, a famous actress, Farrah Lawson, is flying in for the occasion, and there’s nothing like a celebrity cameo to raise a business’s profile.

Now Courtney has less than two weeks to paint a mural, hang up tinkling windchimes, plan party games, and conjure up all the details. While she works her magic, the hostess and her girlfriends head off for an indulgent spa day—which leads to a fateful facial for Farrah, followed by her mysterious death. Could the kindhearted eyebrow waxer who Farrah berated in public really be the killer, as the police suspect? Courtney thinks otherwise, and with the help of her imaginative sleuth fairy, sets out to dig up the truth behind this puzzling murder . . . 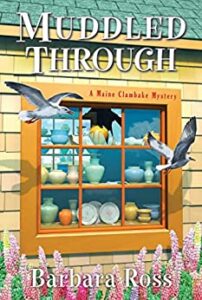 Muddled Through – A Maine Clambake Mystery #10
by Barbara Ross

In the tenth installment of Barbara Ross’s award-winning mystery series starring Julia Snowden and her family’s coastal Maine clambake business, a heated feud over a proposed pedestrian mall leads to murder–which means it’s up to Julia to clean up the case.

Mud season takes on a whole new meaning in the coastal town of Busman’s Harbor, Maine, when local business owners sling dirt at one another in a heated feud over a proposed pedestrian mall. Vandalism is one thing, but murder means Julia Snowden of the Snowden Family Clambake steps in to clean up the case…

When Julia spots police cars in front of Lupine Design, she races over. Her sister Livvie works there as a potter. Livvie is unharmed but surrounded by smashed up pottery. The police find the owner Zoey Butterfield digging clay by a nearby bay, but she has no idea who would target her store. Zoey is a vocal advocate for turning four blocks of Main Street into a pedestrian mall on summer weekends. Other shop owners, including her next-door neighbor, are vehemently opposed. Could a small-town fight provoke such destruction? When a murder follows the break-in, it’s up to Julia to dig through the secrets and lies to uncover the truth…

Purchase at these retailers 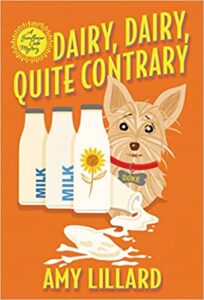 In a charming new cozy mystery series from USA Today bestselling author Amy Lillard, twenty-something advice columnist Sissy is ready for a fresh start in the small town of Yoder, Kansas – along with her loyal Yorkie, Duke. She’s planning to help out at her aunt’s Sunflower Café, but little does she know her new duties will soon include solving a murder!

After Sissy’s rodeo cowboy boyfriend turns out to be more of a rodeo clown, she packs a bag; picks up her Yorkshire terrier Duke; and leaves Tulsa, Oklahoma, bound for her parents’ former hometown. There are still plenty of Yoders in Yoder, Kansas, including Sissy’s aunt Bethel, who owns the Sunflower Café but recently broke her leg. It’s a homecoming of sorts as Sissy arrives to help in the café and reunite with her pregnant cousin Lizzie. Plus she can continue to secretly write her newspaper advice column as seventy-year-old “Aunt Bess.” But it’s Sissy who could use some advice when she finds the milk deliveryman out behind the café with a knife in his back. As the sheriff’s prime suspect, it’s up to Sissy to catch the backstabber herself—before someone else gets creamed… 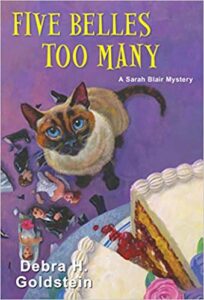 Five Belles Too Many – A Sarah Blair Mystery #5
by Debra H. Goldstein

In the fifth Sarah Blair Mystery set in Alabama and featuring the culinary-challenged sleuth Sarah Blair, things get a little too real when a murderer crashes a reality competition for brides…

Sometimes Sarah’s mother, Maybelle, can be higher maintenance than her Siamese cat RahRah. Maybelle and her friend, Mr. George Rogers, have been chosen to be one of five couples competing for a small-town “perfect” wedding and dream honeymoon on a Southern Belles reality show—and guess who has to be chaperone. Even more vexing, the producers have decided to put up the crew and participants at the restaurant/bed and breakfast owned by Sarah’s nemesis Jane Clark.

But when someone turns up dead with Jane kneeling by the body with blood on her hands, she goes from being Sarah’s chief rival to the police’s chief suspect. Neither Sarah nor her twin, Chef Emily Johnson, can stand Jane—still, they don’t think she’s a murderer. The producers vow the show must go on, but to protect their mother and the other contestants, Sarah vows to find the true killer before someone else gets eliminated…