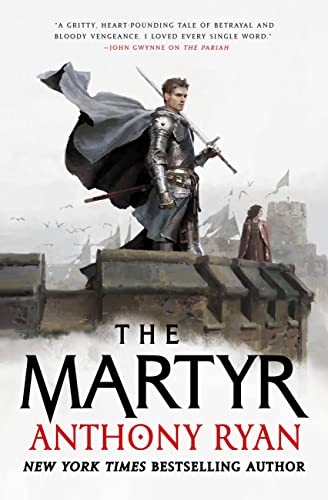 Deadly feuds and ancient secrets spell war in the second novel of The Covenant of Steel, a new epic series of action, intrigue, and magic from a master storyteller who has taken the fantasy world by storm.

“Ryan again showcases his gift for epic fantasy in his excellent sequel to The Pariah . . . . Ryan’s evocative prose enhances the suspenseful, intricate story . . . .This fires on all cylinders.” —Publishers Weekly (starred review)

Times have changed for Alwyn Scribe. Once an outlaw, he’s now a spymaster and sworn protector of Lady Evadine Courlain, whose visions of a demonic apocalypse have earned her the fanatical devotion of the faithful.

Yet Evadine’s growing fame has put her at odds with both Crown and Covenant. As trouble brews in the kingdom, both seek to exploit her position for their own ends.

Sent to the Duchy of Alundia to put down a rebellion, Alwyn must rely on old instincts to fight for his new cause. Deadly feuds and ancient secrets are laid bare as war erupts, a war that will decide the fate of the Kingdom of Albermaine and, perhaps, prevent the coming of the prophesied Second Scourge.

“A gritty, heart-pounding tale of betrayal and bloody vengeance. I loved every single word.” — John Gwynne on The Pariah