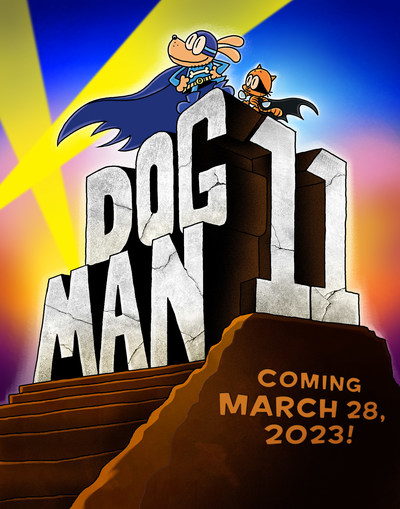 DOG MAN: TWENTY THOUSAND FLEAS UNDER THE SEA BY #1 BESTSELLING AUTHOR AND CALDECOTT HONOREE DAV PILKEY TO BE PUBLISHED WORLDWIDE ON MARCH 28, 2023.

Readers and retailers rejoice! Scholastic, the world’s largest publisher and distributor of children’s books, announced today that 2023 will be a big and exciting year for kids and families everywhere with the publication of a new Dog Man graphic novel. DOG MAN: TWENTY THOUSAND FLEAS UNDER THE SEA, the newest book in the #1 global bestselling and critically-acclaimed series will release on March 28, 2023, simultaneously in the U.S., Canada, U.K., Australia, New Zealand, and throughout Asia. This eleventh installment in the series follows Dog Man: Mothering Heights which dominated both children’s and adult bestseller lists, and was the #1 bestselling book overall in 2021, selling more than 2 million copies to date in the U.S. alone. In just over five years since Dog Man launched to multiple starred reviews, there are more than 50 million copies of the Dog Man books in print with translations in 42 languages. DreamWorks Animation is currently developing a movie adaptation of Dog Man.
The phenomenal success of Dog Man has also helped to drive the comic book industry, and Dav Pilkey’s global domination continues on November 29, 2022 with the release of Cat Kid Comic Club: Collaborations, the newest book in his #1 worldwide bestselling Cat Kid Comic Club graphic novel series, a spin-off of Dog Man. With more than 90 million copies in print to date, the Captain Underpants series will soon mark its 25th anniversary. To celebrate the milestone of Pilkey’s popular series widely-credited for helping to create the illustrated children’s chapter book category, Scholastic will publish on March 7, 2023 a special anniversary edition of the first Captain Underpants book, The Adventures of Captain Underpants, featuring a bonus 32-page all-new comic mash-up starring Dog Man and Captain Underpants, bringing together two iconic characters in a never-before-told story.
In a statement, Caldecott Honoree Dav Pilkey said: “I am humbled and grateful to do what I love for a living. Since the pandemic began, I have been inspired to create even more stories and to learn and grow as an artist–from experimenting with various mediums to make comics using photography, poetry, and calligraphy, to building character models and sets by hand, as well as exploring different themes and storylines. My hope is that my books foster creativity and imagination, and instill a lifelong love of reading.”
To engage and bring together its millions of fans worldwide, Scholastic also announced the official launch of Dav Pilkey’s Epic Comic Club, a new global online platform where kids can create their own comics. The COPPA-compliant site, www.EpicComicClub.com, opens up with a special message from Dav Pilkey encouraging kids to have fun making comics, and features a place where kids can upload their stories in a safe and moderated environment, along with an “Epic Comic Club Wall” to showcase their comic creations. The online hub includes free monthly downloadable activities including comic starters, customizable official membership cards, collectible character badges, special sneak peeks, exclusive book news, and more. The Epic Comic Club site also will serve as a destination for educators, booksellers, parents, and caregivers around the globe to access free resources including tips on how to start their own Epic Comic Clubs at home, in bookstores, classrooms, or libraries. Additionally, Scholastic has created a special section on its existing HomeBase platform (www.scholastic.com/homebase) as another portal where kids can submit their comics and access more games inspired by Dav Pilkey’s beloved characters.
Ellie Berger, President of Scholastic Trade, said: “Dav is one of the most inspiring and creative storytellers of this generation and the anticipation and strong demand for his books has been extraordinary. With the launch of ‘Dav Pilkey’s Epic Comic Club,’ we can’t wait to see kids’ creativity and imagination come to life in their own comics.”