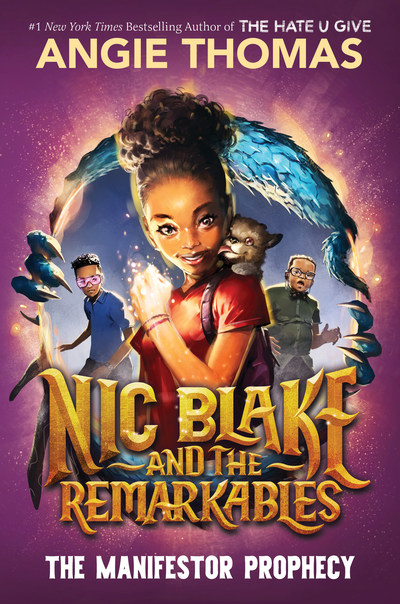 HarperCollins Children’s Books/Balzer + Bray announced the highly anticipated middle grade debut from Angie Thomas, the #1 New York Times bestselling author of The Hate U Give, On the Come Up, and Concrete Rose. Publishing April 4, 2023, Nic Blake and the Remarkables: The Manifestor Prophecy is the first in a contemporary fantasy trilogy inspired by African American history and folklore. Donna Bray bought USCPOM rights from Molly Ker Hawn at the Bent Agency.

With a literal Underground Railroad, haints, vampires, ghosts, a dragon, and tons of magic, Nic Blake and the Remarkables takes readers on a wild ride through a world that looks like, but isn’t quite, our own, making for an inventive, suspenseful (and funny!) ride in this new trilogy.

Angie Thomas said: “I think I can speak for a lot of us when I say that over the past two years, I’ve desperately needed an escape. While I’m known for writing young adult fiction that hits on hard topics, whenever I want to read for enjoyment, I usually turn to middle grade fantasy novels. It only felt right to finally give the genre and category a go myself. Nic Blake is a character younger Angie longed for—a young Black girl with magical powers who gets to go on adventures, not as a sidekick, but as the center of the story.”

Since her debut in 2017, Angie has established herself as a global literary star. All her novels have debuted at #1 on the New York Times bestseller list: The Hate U Give (249 weeks and counting in both hardcover and paperback), On the Come Up, and Concrete Rose. The Hate U Give hit theaters in 2018, in an adaptation starring Amandla Stenberg, Issa Rae, and Regina Hall. The film adaptation of On the Come Up will release on Paramount+ on September 23 starring Jamila C. Gray, Da’Vine Joy Randolph, Lil Yachty, Method Man, and more. Angie has earned a total of twenty starred reviews for her three novels and has garnered numerous awards and honors, including a 2022 Printz Honor for Concrete Rose.

Angie Thomas is the author of the award-winning, #1 New York Times bestselling novels The Hate U Give, On the Come Up, and Concrete Rose as well as Find Your Voice: A Guided Journal for Writing Your Truth. She is also a coauthor of the bestselling novel Blackout and the forthcoming companion novel, Whiteout (on sale November 8, 2022). Angie divides her time between her native Jackson, Mississippi, and Atlanta, Georgia. You can find her online at www.angiethomas.com.