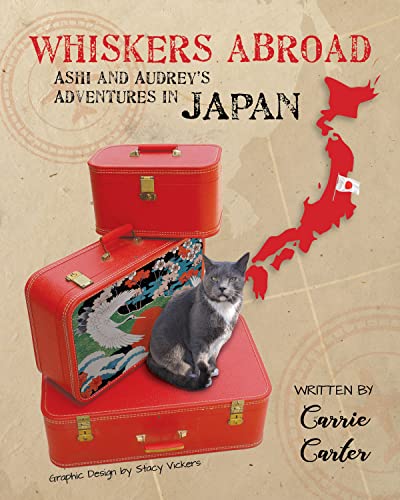 Ashi and Audrey’s Adventures in Japan by Carrie Carter

Whiskers Abroad is a lively travelogue featuring a trip to Japan shared by two main characters, Audrey and her cat Ashi, who alternate recounting their versions of events. During a twelve-day trip, the pair visit several cities. Adventures abound. Audrey is still trying to find her place in the universe, while Ashi believes Audrey would sink beneath the waves were he not present to rescue her. Audrey’s daily horoscope offers tantalizing clues as to what’s in store for the pair. Written by Carrie Carter and designed by Stacy Vickers, Whiskers Abroad is both an amusing travel story with unforgettable characters and a useful guide for tourists going to Japan. Lavishly designed, Whiskers Abroad will delight both your eyes and your sense of adventure.

“Whiskers Abroad is simply a delight, offering respite and inspections that bring readers into Japan from different perspectives, capturing a writer’s journey through new foods, a different culture, and a cat’s eyes. It’s very highly recommended for its ability to reach beyond the usual travelogue audiences to immerse all ages in its fun adventure”.  Diane Donovan, Midwest Book Review

Carrie Carter has a profound love for Japan, cats, sumo, dioramas, and eating unusual foods. She has traveled with her husband Jim to Japan fourteen times, so her numerous holidays across her favorite country were the inspiration for her first book, Whiskers Abroad: Ashi and Audrey’s Adventures in Japan. Carrie has run multiple marathons including the Tokyo Marathon, and, as expected, Carrie and Jim live with an adorable cat named Frenemy, who was unhappy at not being selected as the model for the book.

She started and has been playing in an ‘80s band, Molly and the Ringwalds, for over two decades now! In addition to playing the keyboard, Carrie also plays the recorder and bagpipes.

Carrie lives in Houston, TX, and graduated from the University of Texas at Austin. At home, she loves to cook, design/create Halloween costumes, daydream about meeting Jacques Pepin, and watch Elvis movies, although not necessarily at the same time. She dislikes overly dramatic music used in reality TV shows. Currently, Carrie is working on her second book, a sequel to Whiskers Abroad, where Audrey and Ashi explore further into Japan and get themselves into even more interesting predicaments.