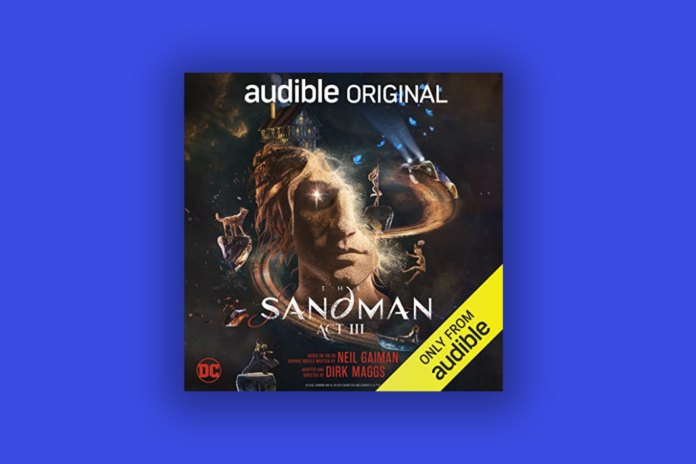 Audible today surprise released the much-anticipated third installment of The New York Times best-selling, multi-part original audio drama franchise, The Sandman. Picking up where The Sandman: Act II left off, The Sandman: Act III, now available exclusively on Audible, continues to bring to aural life the world of The New York Times best-selling graphic novel, The Sandman, created by Neil Gaiman and published by DC. The third installment is once again adapted and directed by co-executive producer Dirk Maggs and narrated by Gaiman, who also returns as creative director and co-executive producer, with original score from BAFTA Award-winning composer James Hannigan.

“You are not dreaming! We are thrilled to surprise fans with the third volume in Audible’s Sandman franchise, today. We couldn’t wait for our listeners to drift back into this world with us, and this installment is again beautifully brought to life in audio with even more immersive soundscaping and incredible performances,” said Audible EVP and Head of US Content, Rachel Ghiazza. “We were blown away by the response to the first two installments, which broke Audible records and took our listeners to places beyond their wildest imagination, and we continue to be in awe of this beloved franchise helmed by a true visionary, Neil Gaiman, and brought to life by the incredible talents of Dirk Maggs and an ensemble of dreams.”

Neil Gaiman said, “The excitement and the joy people have taken in the astonishing Audible adaptations of Sandman has been such a morale booster over the last few years. The only downside has been that everyone I know, and many thousands of people on social media that I don’t know, have wanted to know when Act III would be released. Now you all know. I think it might be the best one yet.”

“I can’t wait for you to join us for The Sandman: Act III. It’s been a long time coming and it’s worth every minute of the wait,” added Dirk Maggs. “New to this installment, Regé Jean Page’s bereaved hero finally meets Destruction, played by the brilliant David Harewood. There’s a modern-day road trip across the US with Dream and Delirium, and we finish up beyond space and time in The Worlds End Pub, where the fantastic Wil Wheaton as Brant Tucker and KJ Apa as Prez join this amazing cast.”