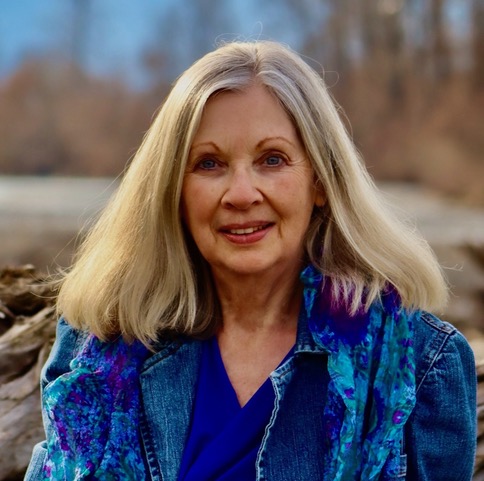 The Razor Edge of Horror BY W. L. Hawkin

“What are these, so withered, and so wild in their attire, that look not like th’inhabitants o’ th’ earth and yet are on it?” Estrada drawled in a terrible English accent.
Maggie blinked. “How do you remember quotes like that?”
He shrugged. “I read.”
“Our high priest has literary leanings,” Sensara said. “It’s one of his many secrets.”

At some point in your literary life, you may have run across this quote from Macbeth. I taught the Scottish play several times during my career as a high school English teacher. Macbeth, my favourite Shakespearean play, and one of unparalleled horror, was one of the 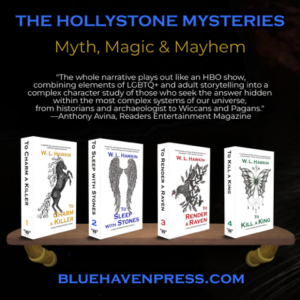 inspirations for my Hollystone Mysteries series, and this quote is from the first book, To Charm a Killer. Seventeen-year-old Maggie Taylor is out in the woods writing a Macbeth essay when she suddenly hears bagpipes. Her dog leaps the fence, and she follows. That’s how she meets the witches of Hollystone Coven in the midst of their sexy Fall Equinox ritual. What Maggie doesn’t know is that they’ve just charmed a serial killer and everyone’s world is about to become “out of joint.” What she does know is that she wants to join these witches to escape her mundane life and will do anything to do it.

Everything that frightens me ends up in my books including black hairy spiders. A fluff of dark wool on the floor can elicit a heart-pounding scream and rocket me across the room. I once lived in a basement suite with unscreened windows and was constantly charged by thundering wolf spiders magnetized by my fear. One particularly willful wolf spider housed itself under my futon and would come out at night to pierce my leg with its V-shaped fangs and drink. That’s how an unexpected tarantula ended up in my last book. Writing not only makes it real but helps me cope with my fear.

It’s the unexpected, the unusual, and the unpredictable that breathes life into our fears—those things we cannot control or understand. And through the “collective unconscious” we share these fears. Death and what comes after. Imprisonment. Slavery. Torture. A murdering psychopath. A virus with the potential to kill or transform human into vampire. An adversary who knows your weaknesses and preys upon them. A threat to family and friends. A horrific betrayal that spurs mistrust. If it makes my skin crawl, it injects raw emotion into my writing that will likely make your skin crawl as well.

Our brains are incredible instruments—worlds unto themselves. The fear, flight, freeze response we experience when terrified occurs whether we’re experiencing the phenomenon or reading/viewing it. That lovely chemical, dopamine is released, and gives us a “hell yeah” rush. And if, at the end of the story, all is well and balance is restored, we take that last big breath and feel like we’ve just won a marathon against an army of villains.

In the second book in my series, I introduced a particularly vicious Spanish vampire named Diego who can transform into a pterodactyl-like creature. He gave his minions the power to shift into ravens. Since the story is set in the Pacific Northwest, where ravens are not just familiar but are trickster creatures of myth, these ravens are able to stalk their victims unnoticed, carry humans through the air, fly into open windows, and even steal babies from their cribs. That happens in my third book, To Render a Raven, when Diego’s sons abduct Estrada’s child, so he’ll come after her. That’s the kind of horrific psychological game Diego likes to play.

I didn’t consider To Render a Raven a horror story until I chatted with Dome and Cam on Sci-Fi Saturday Night last fall, and Cam brought it up. I combine genres when I write, so called it urban fantasy/thriller, but yes, Cam and Dome were correct in that assertion. I see now that Raven tiptoes the razor-edge of horror leaving its own bloody tracks. And I can’t go on without saying that, not long ago, our world lost Dome, and my heart still aches. Time has no bounds, and whether fear or sadness, the grief of loss creates intense raw emotion. Listening to his voice brings tears to my eyes, and I cherish this interview.

I’m rereading To Render a Raven right now and remembering that conversation because, due to a timeslip, Estrada’s been given the opportunity for an epic do-over. Book five, which I’m now dreaming into words, demands a complete retelling of the vampire horror. With foreknowledge of what hasn’t yet occurred, Estrada’s intent on wiping Diego and his carrion sons off the face of the Earth. But will he be successful? Or will his plans go awry as they did to Macbeth?

I don’t know. I never know until I dream the scene and my muses reveal what’s happening. What I do know is that last night, after reading some particularly gory scenes in To Render a Raven, I had vivid, bloody dreams. I was mired in some strange state of consciousness, not awake and not asleep, somewhere deep in the mirky levels where inspiration and experience converge.

Here’s a look at TO RENDER A RAVEN: 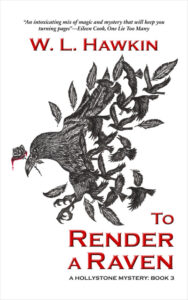 Estrada is High Priest of Hollystone Coven, a shaman and magician. But is he a match for a vengeful vampire? When Diego steals his daughter from her crib on the eve of her first birthday, the Hollystone witches converge. The same night, a woman is murdered and another abducted. All three scenes are marked by roses that point to Michael Stryker, Estrada’s lover and best friend—a man with a strange dark “virus” brewing inside him. As the witches journey up the Pacific coast, emotions run raw as the close confines of a yacht heighten the tension between his jealous lovers. And then they meet the ravens . . .

Diego wants blood. Estrada wants his baby back. What will the high priest sacrifice to bring his daughter home?

A sexy Hitchcockian thriller that demystifies Vampire and illustrates the power of Love.

EXCERPT FROM TO RENDER A RAVEN::::

Diego sat on his throne, leaned back, and crossed his legs. The sadist was enjoying himself. “Come Estrada. Come, kneel before me.”

Diego smirked. “Stubborn and proud. Such attractive traits in an adversary. Eliseo, bring The Wheel.” 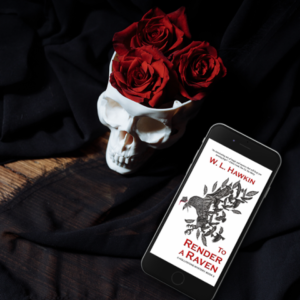 Estrada watched as a boy—with an angel’s face and devil’s eyes—pushed an iron contraption into the center of the room on squealing metal wheels. The boy, Eliseo, couldn’t have been more than thirteen when Diego took him. A raven-haired cherub.

The circular device the boy commanded was taller than a man and fitted with chains and shackles. Three ugly gargoyles stood guard at its base. Estrada knew this was for him. It was the kind of medieval torture device that would go over big in his magic act at Pegasus. Of course, there, he’d know all its hidden workings. Already, he was examining the contraption with an eye to escape.

It was now or never. Estrada took a deep breath, focused on Diego, and hurled two enormous fireballs from his hands. Surprised by their ferocity, he stepped back.

Diego winced as the flames skirted the flesh of his left hand. Two vampires beside him caught the flames and fell writhing to the floor. Estrada scanned the flickering candles in niches along the carmine walls.

Zion and Eliseo grappled Estrada and forced him against The Wheel. Surprised by their physical strength, he struggled, but to no avail. After closing the shackles around his wrists and ankles, they stood back looking smug.

Diego turned to Michael. “Mandragora.” He pronounced the name as if it were some princely title, then sniffed and scratched his beard. “Since you brought Estrada to me, I will give you one last chance to save yourself. Can you prove you are worthy?”

A cold rush cut through Estrada’s gut. Gasping, he shot a glance at Dubh, and then looked back at Michael. Had his lover betrayed him? 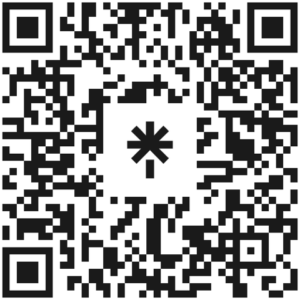 For Estrada, the physical is always trumped by the emotional and psychological threat to his family and friends, his lover, his child. The terror of loss and helplessness overwhelms but also galvanizes him, as it does us. We champion this hero, who puts himself in mortal—and sometimes immortal—peril to face the monsters and save those he loves. I walk through the fear hand in hand with Estrada, and, in the end, I’m left breathless by his exploits, and wondering what’s to come.

For images that inspire my stories, visit my Pinterest board.

W. L. Hawkin writes novels charged with “myth, magic and mayhem” from her home in the
Pacific Northwest. Her Hollystone Mysteries series features a coven of West Coast witches who solve murders using ritual magic and a little help from the gods. The books—To Charm a Killer, To Sleep with Stones, To Render a Raven, and To Kill a King—follow Estrada, a flawed magician and coven high priest as he endeavours to save his family and friends while sorting through his own personal issues.

Her latest book, Lure: Jesse &amp; Hawk, is romantic suspense set in the American Midwest on a Chippewa reservation. Hawkin graduated from Trent University in Ontario with a BA in Indigenous Studies and went on to study English literature at SFU and then teach high school. She found her voice publishing poetry and Native Rights articles in Canadian news magazines and now is an Indie author/publisher at Blue Haven Press. For several years, Wendy has been a book reviewer for the Ottawa Review of Books. A member of the Federation of BC Writers and the Writers Union of Canada, she actively engages with readers and writers at conferences, and is represented by Creative Edge Publicity.

A seeker and mystic, Wendy is fascinated by language, archaeology, and myth. As an intuitive writer, she captures on the page what she sees (visual scenes) and hears (conversations) and allows her muses to guide her through the creative process. Wendy loves to feel the energy of the landscape so, although she’s an introvert, in each book her characters go on a journey where she’s travelled herself. If you don’t find her at Blue Haven Press she’s out wandering the forests and beaches of Vancouver Island with her beautiful yellow dog.