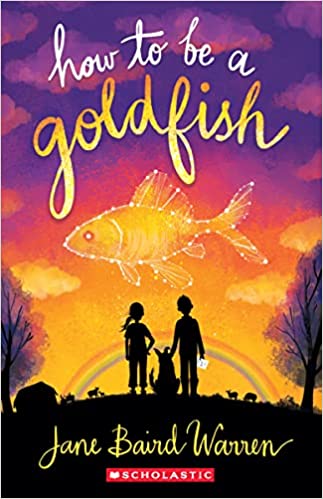 How To Be a Goldfish
A compelling read about acceptance and understanding by critically acclaimed children’s author, Jane Baird Warren

When her teacher assigns a family tree project for parents’ day, Lizzie knows it won’t be long until Scotch Gully’s gossips start up again. Most folks in her conservative town are used to the fact that she’s the only kid with an unmarried mom, but when Lizzie’s family tree research uncovers a shocking secret about her grandmother, Lizzie knows that certain townsfolk will start their back-fence talk about her family once more. She turns to Harry ― who’s been like a grandfather to her ― for help and advice, but Harry has problems of his own. Someone has arrived at his farm claiming to own it, and is forcing Harry out. Now Lizzie must face losing Harry and the place that’s been her second home. Lizzie finds a surprising ally in David, the new owner’s son. Together, their sleuthing uncovers the keys to saving Harry and his farm, but sharing the secrets she and David have uncovered will put Lizzie’s complicated family on centre stage.

Told in the alternating voices of Lizzie and David, How to Be a Goldfish is a compelling, heartfelt, humorous read about acceptance and understanding, and will provide a gentle introduction to discussions about alternative families, homosexuality, feminism, forced adoptions and social justice.

How to Be a Goldfish, Book by Jane Baird Warren (Paperback) | www.chapters.indigo.ca

Jane Baird Warren is a first-generation Canadian with fresh-off-the-boat parents. Literally! Her father came on a boat from Norway and her mother from Scotland. Jane grew up surrounded by a rich and often confusing blend of accents and began collecting new words like some kids collect action figures. At nine she read the dictionary front to back and announced she was going to be a spelunker because she like the word.

Jane left Canada in 1998. For twenty years she travelled extensively in Europe, Scandinavia, the Middle East and Asia as well as South America and Africa. During her travels she completed an MFA in Creative Writing (she loves writing on airplanes). Jane also has a Bed and a BPE and has worked as a teacher, personal trainer, and coach. She currently volunteers as a developmental editor for emerging writers. Jane has been featured on CBC radio and has published short fiction and poetry in more than a dozen literary magazines in North America and the UK. She is represented by Elizabeth Bennett at Transatlantic Literary Agency.

In her fiction and in real life, Jane is fascinated by people — the good ones, the bad ones, and the ones who are ugly inside — but what she values most in both worlds is kindness and courage. She is currently obsessed with the notion of family secrets and how uncovering the truth changes how kids (adults, too!) see and define themselves. She has ridiculous memory for trivia, which she’d always believed was the most useless superpower a girl could have. Until she started writing.

You can find more information about Jane Baird Warren on her website. https://janebairdwarren.com  Drop by and leave a note. She loves visitors.