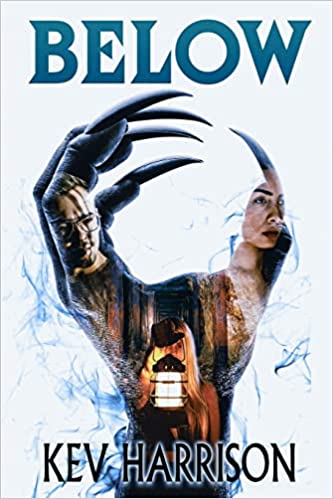 BELOW By Kev Harrison

Decades after his grandfather was buried alive in a Californian gold mine, Dr. Nick Jones teams up with an adventure travel influencer to venture underground and film a documentary, telling the story of what really happened.

What should be a dream come true soon becomes a nightmare as someone or something stirs…BELOW.

“Expect some truly chilling scenes and to definitely get creeped out by what happens in that mine!
This is my first book by the author, and I can tell you it won’t be my last. I enjoyed his storytelling style immensely and found myself feeling like I was stuck in that mine with our characters!” Outlaw Poet, Top 1000 Reviewer Vine Voice

Kev Harrison is a writer of dark fiction and English language teacher from England, living and working in Lisbon, Portugal. He has previously lived in various areas of the UK, as well as Turkey and Poland.

He is a staff writer for This is Horror and has had short fiction published in a variety of magazines and anthologies, including Lost Films, from Perpetual Motion Machine Publishing, Below the Stairs: Tales From The Cellar from Things in the Well, Aphotic Realm Magazine’s ‘Fangs’ issue and ‘In Darkness Delight: Creatures of the Night from Corpus Press. He has also had short fiction featured on The Other Stories and Tales to Terrify podcasts. Thirteen tales of his short fiction are now collected in his debut collection, Paths Best Left Untrodden.

His acclaimed debut novella, ‘The Balance,’ a work of folk-horror with eco-horror themes, is available now, from Lycan Valley Press. He has two releases in Demain Publishing’s Short Sharp Shocks! range: ‘Cinders of a Blind Man Who Could See’ and ‘Curfew’. His second novella, ‘Below,’ is available now from Brigids Gate Press.