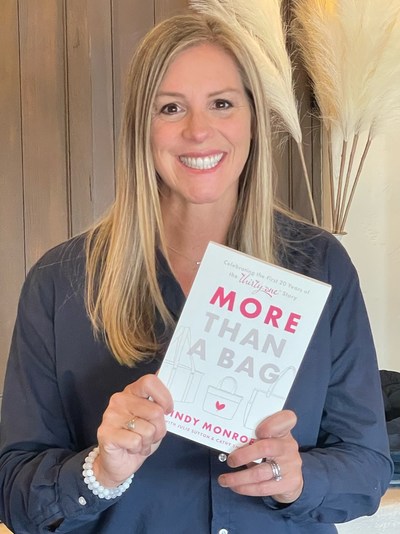 Cindy Monroe, Founder of Thirty-One Gifts, announces the launch of her first book, “More Than a Bag: Celebrating the First 20 Years of the Thirty-One Story.”

In the book, Monroe vulnerably shares her journey of building one of the fastest growing women-owned companies in the world, and later working to help stabilize the business during a period of significant downturn.

As a young mother of two young children with no formal experience as a business owner, Cindy describes herself as one of the least likely people to launch and lead one of the largest direct selling companies in North America, which peaked at more than $750 million in annual revenue in just 10 years. She attributes her success to a guiding mission to invest in women: inspiring, empowering and serving them through Thirty-One’s line of organization solutions, and providing an opportunity to earn income as an independent consultant.

“Everyone loves an overnight success story – but that’s not my story,” said Monroe. “This book takes readers through the highs and lows of building a successful company, and the leadership principles that guided me as Founder and CEO. But ultimately, I hope this book inspires and empowers other ‘unqualified’ women, like me, to believe they can make a difference in their homes, in their work, and in their communities – one relationship at a time.”

“More Than a Bag” pulls back the curtain to share a look at how personal values intersect with business to create an impact through both times of whirlwind growth and times of adversity.

Cindy recalls the juxtaposition of being named one of Forbes Magazine‘s “Self-Made Women to Watch” in 2015, during a particularly difficult season in the business. She details the tangible steps taken to help stabilize the business, while sharing the leadership lessons she learned along the way – including the importance of focusing on impact without getting distracted by living up to a public image.

“More Than a Bag” is currently available for purchase on Amazon, where it debuted as the #1 new release in four categories: Starting a Business, Sales & Selling, Workplace Culture and Direct Marketing. For more information about the book, visit MoreThanaBag.com.

Cindy Monroe founded Thirty-One Gifts in the basement of her Chattanooga, Tennessee, home in 2003. Today she is active as the company’s Founder, building relationships with Thirty-One sales consultants and establishing strategic plans to grow and expand the brand. She is a respected business leader and champion of female entrepreneurs. Most recently, she authored her own book, “More Than a Bag: Celebrating the First 20 Years of the Thirty-One Story.” She has been recognized through numerous honors and awards including, Forbes Magazine’s Self-Made Women to Watch, Columbus Business First‘s 40 under 40 and Fast 50, and was honored twice as one of the Most Influential Women in Direct Selling.

Thirty-One Gifts is a leading provider of handbags, accessories and home organization products sold by its vast community of independent sales consultants across North America. Thirty-One Gifts was founded with one simple goal in mind – to help women by giving them the opportunity to run their own successful businesses. Thirty-One Gifts was acquired by Kanbrick in July 2020. For more information, visit MyThirtyOne.com.