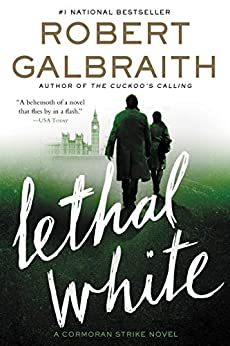 Picking up where “Career of Evil” left off, we find Robin and Matthew at their wedding.

Robin is still recovering from her wounds at the hands of the Shacklewell Ripper and has just found out that Matthew deleted texts from Strike.

Robin is pissed and is half thinking of becoming a run-away bride.

The marriage is off to a very rocky start.

The Private Investigator firm of Cormoran Strike and his partner, Robin Ellacott, is thriving, mostly due to the publicity of catching the Ripper one year earlier.

They have hired a few associates to help with the cases, Barclay being the best of the new hires.

One day….a clearly ill man visited the office ranting and raving about how he, when he was a boy, saw a young girl (or boy) strangled, put into a pink blanket, and buried near the house he grew up in.

His name is Billy, and before the police could arrive, he was wildly running out the door.

Strike, with his prosthetic leg, could not catch him.

But, from that visit……

To see what happens, you can read the book!

But, be prepared…..the market paperback version is 647 pages long, luckily, with only a few pages that drag. All in all another fantastic thriller by Robert Galbraith.

Oh, you can read what the term lethal white is referring to at that U.C. Davis web page.