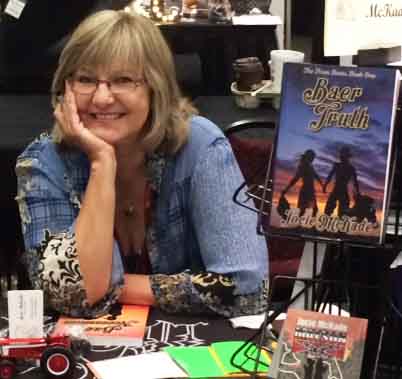 What Scares Authors? By Jocie McKade

There is a world of things that scare me. I really don’t want to be bitten by some poisonous snake or spider, unless there’s a cowboy near by ready to carry me to the hospital or suck the venom out of my ankle.

Being tossed out of a moving vehicle scares me, probably because I’ve had that happen and gravel is not your friend.

Heights aren’t really my friend. I love the mountains….but sky-scrapers?? You can keep them. I’ve managed to travel up those elevators to dizzying heights when I had too, you know, to keep my daughter’s from knowing I was terrified and about to throw up that horrific Chucky Cheese pizza they made me suffer through.

Then there’s that pile of something dark in the corner of the bedroom that makes my heart stop at 3AM until I realize it’s my own pile of dirty laundry. Or how terrifying it is when the doorbell chimes and I’m in jammies, writing, with three day old dirty hair, and I have to answer it because it’s a package and I have to sign for it. Although, this might be way scarier for the package delivery person.

In spite of all the things that scare me, there is one thing that really makes my heart stop….the inability to read what I want. A world where there are no words, no literature, no paperback smut, no heroes, no villains, no cowboys, no space aliens, no books that anger me to the point of throwing them into the wall, no cereal carton to entertain my mornings!

There is now, and has been, at least since I’ve been present on this planet, an effort to censor words. This side, that side, the middle – everyone has an opinion. Now….let me clarify. As a parent I absolutely believe in censorship. Each one of my kids was very different and what one could read, understand and not be bothered by at a certain age, would traumatize the other child and they would let it dwell in their thoughts for weeks. I believe this is true of all kids. Me? I was a reader by an early age and what I could read and comprehend at ten years old, left many of my classmates befuddled.

My fear is the end of books, the end of literature, the end of crime novels, and political diatribes, of real history, and speculative futures.

What scares me is a monochrome world of censored texts to devoid of passion, of thought, of differing opinions, or human instinct, thin books filled with just abstract words. I’m scared that one side or the other will win this battle and those of us the love the written word (agreeable or not) will be left adrift in a sea of redacted tomes that leave only a few words with no substance.

Check out Jocie’s Mayson-Dickson Series:::
The Line is Drawn – on sale for just $.99 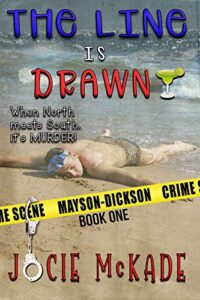 WHEN NORTH MEETS SOUTH IT’S MURDER!
​A secret twin sister? Who knew? Emme Mayson and Jackie Dickson discover they are twins, just before an assassin’s bullet kills the only man who knows everything.

Whisked away to an “off-the-books” witness protection program. With the aid of a wanted hacker, and another pitcher of margaritas, Emma and Jackie are determined to discover the truth about their parents’ secret past and why they were separated into North and South….Was it bad enough to have a man murdered to keep that secret?

Murder, mystery and family fuel the fire between two sisters so different the only thing keeping them from starting another war between the states is the need to solve the case, get their answers and stay alive.