Search
Home Blog WITNESS THE PAST OF DR. BRENNER IN: ‘STRANGER THINGS: THE MANY GHOSTS... 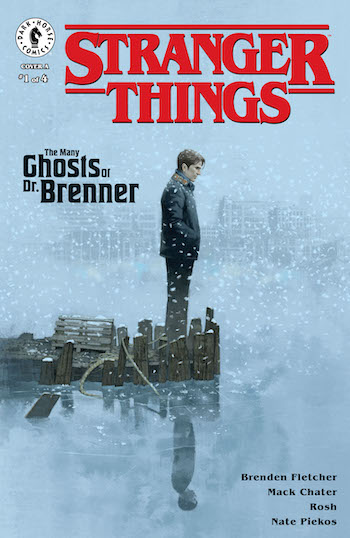 A story of ghosts, science, and villainy

Dark Horse Comics teams up with writer Brenden Fletcher to present Stranger Things: The Many Ghosts of Dr. Brenner #1. This new comic series based on the hit Netflix series, Stranger Things, explores the dark past of one of the show’s most enigmatic characters, Dr. Brenner. The comics feature art by Mack Chater as well as coloring by Ro
sh and lettering by Nate Piekos.

The year is 1968. Dr. Martin Brenner, a disgraced American scientist, returns to the abandoned lab where he and his colleagues collected research for top-secret government projects. But Brenner’s unfinished business in his old lab isn’t the only thing haunting him: a ghostly face from his past seems to be following his every step.

Stranger Things: The Many Ghosts of Dr. Brenner #1 (of 4) will be in comic shops January 11, 2023, and is available for pre-order at your local comic shop for $3.99. Fans can collect the standard cover edition with cover art by Marc Aspinall, as well as three variant covers by Kyle Lambert, Diego Galindo, and Malachi Ward respectively.

“Overall. This is a brilliant start to what looks like a story that may be paying some homage to The Friday the 13th Movies, but done in the style of ‘Stranger Things.’”—SciFiPulse

“Once more into the breach with ‘Stranger Things: Into the Fire #1′(Houser, Kelly, Underwood, Farrell, Piekos) in what looks to be the most promising of the Dark Horse tie-ins to Stranger Things.” —Comic Watch

“Right out of the gate, Kamchata has poised itself as being a captivating corner of the franchise that could both be its own narrative while also making the events of the TV show all the more enriching.” —Comicbook.com