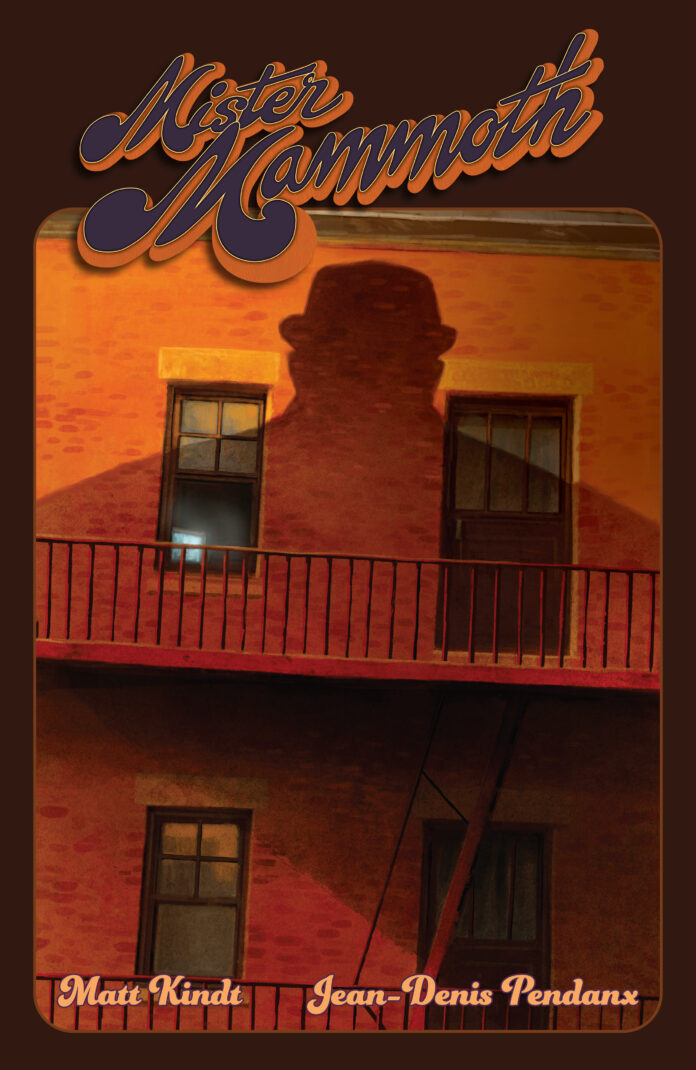 Dark Horse Books and Flux House Books are proud to bring you Mister Mammoth! This hardcover graphic novel is the English-language debut of the Mister Mammoth saga, written by Matt Kindt with art by Jean-Denis Pendanx.

Mr. Mammoth has solved every case he’s ever had – a perfect record. And he’s the kind of person you don’t forget – a seven-foot-tall pacifist, covered head to toe with an impressive collection of scars he refuses to talk about.

But he might be losing his edge. This new case has him stumped and his obsession with a soap opera actress might just be…unhealthy. This case might destroy his career, but it might hold the clues that unlock the only real mystery he’s ever cared about…his traumatic childhood and the scars he carries.

Mister Mammoth plays with the tropes of detective fiction but by the end, turns everything on its head.

The Mister Mammoth hardcover volume will be in comic stores March 29, 2023 and bookstores April 11, 2023. It is available for pre-order on Amazon, Barnes & Noble, and at your local comic shop and bookstore for $29.99.

The announcement of Mister Mammoth follows the news that three of Kindt’s acclaimed comics are currently in active development under the Dark Horse Entertainment banner:

Based on the comic series by Matt Kindt and Wilfredo Torres, the feature film adaptation of the stylish spy thriller Bang! is set to star Idris Elba (The Harder They Fall, Concrete Cowboy, Luther) and be directed by David Leitch (Bullet Train, Atomic Blonde, Deadpool 2). The script will be written by Kindt and Zak Olkewicz (Bullet Train, Fear Street Part 2: 1978). The film will be produced by Mike Richardson and Keith Goldberg for Dark Horse, David Leitch and Kelly McCormick for 87 North, and Idris Elba. In Bang!, when a terrorist cult sets out to start the apocalypse with a series of novels meant to brainwash their readers, the world’s most celebrated spy is sent to track down and kill the author responsible.

Based on Kindt’s acclaimed Mind MGMT series, Curtis Gwinn (Stranger Things) is set to Executive Produce this series adaptation. The film will be produced by Mike Richardson and Keith Goldberg for Dark Horse, along with Gwinn. In Mind MGMT, a young woman stumbles onto the top-secret Mind Management program. Her ensuing journey involves weaponized psychics, hypnotic advertising, talking dolphins, and seemingly immortal pursuers, as she attempts to find the man who was MIND MGMT’s greatest success – and its most devastating failure. But in a world where people can rewrite reality itself, can she trust anything she sees?

Director Alice Waddington (Paradise Hills) is set to direct Netflix’s adaptation of Dept. H, which is based on the popular comic book series by Matt and Sharlene Kindt. Writer T.S. Nowlin (The Maze Runner) will adapt the script. Mike Richardson, Keith Goldberg and Paul Schwake of Dark Horse Entertainment will produce.