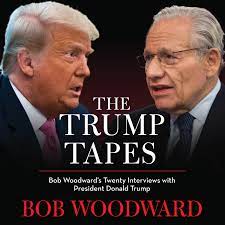 “I’m doing something here that I’ve never done before, presenting the lengthy, raw interviews of my work,” states Woodward in the introduction. “I wanted to put as much of Trump’s voice, his own words, out there for the historical record so people can hear and make their own assessments.”

“This audiobook is essential listening for anyone who wants to understand President Trump’s decision-making process, from his handling of the COVID crisis to foreign policy and racial justice,” said Lynch. “You’ll hear the greatest political reporter of his generation go toe-to-toe with a sitting president. It’s as if you are in the room with them – a remarkable experience.”

The Audiobook begins in March 2016 when Bob Woodward and political reporter, Robert Costa, interviewed presidential candidate Donald Trump when he was on the verge of the republican nomination. Woodward then interviewed President Trump 19 times in the fall of 2019 through August 2020 for his second book on Trump’s presidency, Rage.

The recordings are a striking and detailed portrait of a president. They take you inside Woodward’s reporting process and give listeners a masterclass in Trump politics and journalism.

Recalls Woodward of the tapes: “Re-listening to the tapes earlier this year, I was stunned by their relevance to understanding who Trump is. I hope when you listen you feel you are in the Oval Office with me as Trump slams the Resolute Desk, or playing concierge at Mar-a-Lago.”

Listening to these interviews in full is an unparalleled excursion into Trump, how he views the presidency, the country and the world. Hear him at his most raw, profane, divisive, and deceptive and, ever the salesman, also at his most entertaining and engaging.

Perhaps Woodward’s greatest reporting feat since All the President’s Men, this audio is a must-listen for all historians and citizens— and for many future generations.

BOB WOODWARD is the author of 21 books. Fifteen have been New York Times #1 bestsellers, including three on Trump: Fear (2018), Rage (2020), and Peril with co-author Robert Costa (2021). Woodward has been a Washington Post reporter for 50 years and shared in two Pulitzer Prizes. He lives in Washington DC with his wife, journalist Elsa Walsh.