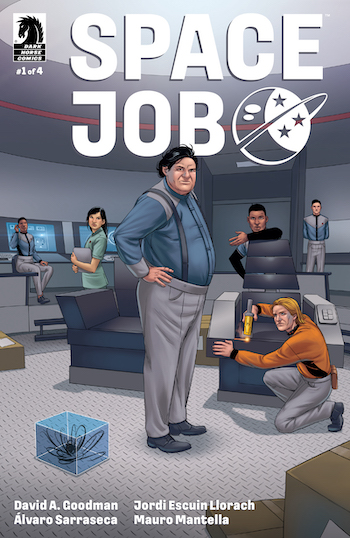 A new space comedy from a writer of ‘Futurama’, ‘Star Trek: Enterprise, and ‘The Orville’

Dark Horse Comics is proud to present Space Job, an all-new series by writer David A. Goodman. The crew of the SS George H.W. Bush may not be the best in the galaxy, but they’re, well… a crew. Space Job features art by Álvaro Sarraseca and colors by Jordi Escuin Llorach.

It’s the future, and serving aboard the S.S. Bush is the worst job in the fleet. The Captain is every terrible, self-centered boss you’ve ever had, more concerned with what he bought on Space eBay than he is in getting the work done; the Communications Officer always seems to be on a personal call, and nothing gets fixed because the Chief Engineer really is only interested in hitting on his coworkers. They’re on a simple cargo run, and the biggest threat to the ship is the fact that the Operations Officer, the one guy holding it all together, is updating his resume. What could go wrong?

“Most of the people in the world work in jobs they hate, and I don’t think that will be any different in the future,” says writer David A. Goodman, “the human adventure is figuring out how you’re going to get through the day without getting fired. I think we will relate to the crew of this ship, and enjoy their travels because it’s not happening to us.”

Praise for The Orville comics:

“A solid start to one of the year’s most promising new books!” — Infinite Earths

“I thoroughly enjoyed The Orville: Launch Day #1. It provides a fun and interesting story that leaves enough questions unanswered that I definitely want to catch the finale to see how it all turns out.” —But Why Tho?

“The Orville: Artifacts #1 continues to expand the world ofThe Orville, featuring the same balance of science-fiction and comedy that made the show a great watch.” —But Why Tho?