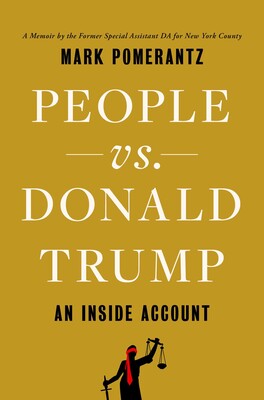 Simon & Schuster announced today that it will publish PEOPLE VS. DONALD TRUMP: An Inside Account, a fascinating behind-the-scenes look at the attempt to prosecute former president Donald Trump, written by Mark Pomerantz, one of the lawyers who worked on the case and resigned in protest when Manhattan’s district attorney refused to act. The publication date is February 7, 2023.

In February 2021, Pomerantz was a retired lawyer living a calm suburban life when he accepted an unexpected offer to join the staff of the district attorney of New York County to work on the investigation of former president Donald Trump. Manhattan District Attorney Cyrus Vance Jr. was interested in Pomerantz because he brought vast experience in litigating white collar and organized crime cases, having worked as a federal prosecutor and a criminal defense attorney for decades. His clients had included governors and senators, business leaders, financial institutions, and gangsters and murderers – everyone from Steve Jobs to Matthew “Matty the Horse” Ianiello, said to have been the acting boss of the Genovese crime family.

Over the next year, Pomerantz investigated Donald Trump and the Trump Organization. He interviewed potential witnesses, scrutinized financial records, and learned everything he could about Trump’s business practices. The inves­tigation led him to believe that the former president’s approach to business had much in common with the business practices of another well-known public figure—former mob boss John J. Gotti.

Ultimately, Pomerantz’s work led to the indictment of the Trump Organization and Allen Weisselberg, the chief financial officer of the Trump Organization, on tax fraud and related charges. Both the Trump Organization and Allen Weisselberg were later convicted on all charges. But that prosecution was merely the prelude to a larger criminal case that Pomerantz and other prosecutors wanted to bring against Donald Trump himself. Pomerantz gathered enough evidence to support the view—held by many of his colleagues on the case, including former Manhattan district attorney Cyrus Vance Jr.—that the former president should be prosecuted for a variety of serious financial crimes. When the new Manhattan district attorney, Alvin Bragg, refused to authorize Trump’s prosecution, Pomerantz and his colleague Carey Dunne resigned. This book explains what happened.

In PEOPLE VS. DONALD TRUMP, Pomerantz tells the behind-the-scenes story of the Trump investigation, why he believes Donald Trump should be prosecuted, and what we can learn about the nature of justice in America from this extraordinary case.  Pomerantz says he wrote the book because “the public needed to know the truth.” Pomerantz explains that Donald Trump built his business by using false financial statements. He writes that the failure to prosecute him was a mistake that leads people to believe that Trump cannot be held to account under the rules that apply to everyone else. In his view, a society that depends on the fair enforcement of the rule of law should not allow that to happen.

Jonathan Karp, CEO, president and publisher at Simon & Schuster, says: “Mark Pomerantz has written an unprecedented and revelatory account of the challenges inherent in prosecuting a former president of the United States. His book is a case study in how the criminal justice system works and how prosecutors think.” Karp acquired first serial, North American, and audio rights from Mel Berger at WME. The author narrates the audiobook.

MARK POMERANTZ received a B.A. from Harvard College in 1972 and a J.D. from the University of Michigan Law School in 1975, where he was editor in chief of the Michigan Law Review. He served as a law clerk to Judge Edward Weinfeld of the U.S. District Court for the Southern District of New York and Justice Potter Stewart of the U.S. Supreme Court.

Pomerantz worked two stints as a federal prosecutor in the U.S. Attorney’s Office for the Southern District of New York, first leading the appellate unit and later returning as chief of the office’s criminal division, where he supervised cases involving financial fraud, corruption, narcotics dealing, police misconduct, and organized crime. In private practice, he spent many years litigating criminal cases as a partner at Paul, Weiss, Rifkind, Wharton & Garrison, LLP.

Pomerantz has also been on the faculty of Columbia Law School and has lectured on criminal procedure and white-collar law at Harvard and Stanford Law Schools. He is a member of the advisory board of the Quattrone Center for the Fair Administration of Justice at the University of Pennsylvania Law School. From February 2021 to February 2022, he worked pro bono as special assistant district attorney in the office of the New York District Attorney Cyrus Vance Jr. to assist with that office’s criminal investigation into the personal and business finances of former president Donald Trump.