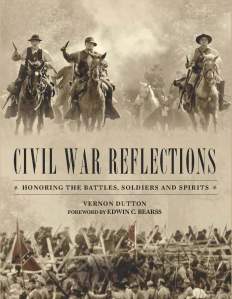 Much has been written about the Civil War. Various battles have been examined and re-examined, the leadership of both sides has been questioned, evaluated and battlefield statistics have been printed numerous times.

With any war the most staggering cost is in the human toll, not only in deaths measured, but in lives forever changed. The feel, the smell, the absolute terror of war is a hard point to capture in words.

In Civil War Reflections, author Vernon Dutton has managed to create the emotion all soldiers must feel in battle. His poems bring the dirt, the blood, the grieve and the homesickness alive. Poems written to the love of his life, to the shattered hearts of those who will never see home again, Mr. Dutton lets no emotion escape the reader.

From tears, the smiles, from fear to triumph, Civil War Reflections is a must read for any Civil War buff, any soldier who will know these words so well, or any reader who appreciates the finest prose a poet can offer.

THE VANISHING BY JAYNE ANN KRENTZ This plot begins during the cold war era and rumors about research into paranormal abilities and weapons. I love...
Read more