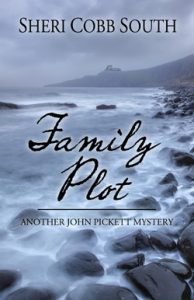 In disgrace with her aristocratic in-laws, recently widowed Lady Fieldhurst is exiled to Scotland with her three young nephews in tow. On impulse, she and the boys decide to stay at an isolated seaside inn under an assumed name, where they can enjoy a holiday far away from the scandal that still plagues the family.

But trouble soon finds them when the boys discover an unconscious woman on the beach—a woman who bears a startling resemblance to the local laird’s daughter, missing and presumed dead for the last fifteen years. Uncertain whether to welcome her as a returning prodigal or denounce her as a fraud, Angus Kirkbride sends to London for a Bow Street runner—which presents a dilemma for Lady Fieldhurst, since she has chosen to call herself Mrs. Pickett after the handsome young man who saved her from hanging for the murder of her husband.

Meanwhile John Pickett, hopelessly pining for Lady Fieldhurst, resolves to forget her by marrying another. When magistrate Patrick Colquhoun receives Kirkbride’s summons, he packs Pickett off to Scotland before his most junior runner can do anything rash.

Upon his arrival, Pickett is surprised (though not at all displeased) to discover that he has acquired a “wife” in the person of Lady Fieldhurst. But when Angus Kirkbride dies only hours after announcing his intention of changing his will in his daughter’s favor, “Mr. and Mrs. Pickett” must join forces to discover the truth about a family reunion suddenly turned deadly.

“It appears we have only one room vacant tonight on account of the fine weather bringing all the anglers to the coast for a last bit of fishing ere the winter sets in,” the innkeeper informed Pickett. “That being the case, I’ve taken the liberty of having your valise sent up to your wife’s room. I hope that’s agreeable.”

“Aye—Mrs. Pickett. You did say that was your name?” the innkeeper asked in some consternation.

“Yes, that’s it.” Pickett darted a quick, bewildered glance up the staircase.

“You’ll think me a regular noddy for not connecting the pair of you at once. Truth to tell, I had the impression Mrs. Pickett was a widowed lady.”

“No, that’s quite—quite all right,” Pickett assured him, wanting only to be rid of the man so that he might resolve the situation with the woman whom the innkeeper imagined to be his wife.

He wondered what sort of female he would find upstairs; a woman of a certain age, apparently, if the innkeeper had assumed her to be a widow. He climbed the stairs with a growing sense of dread until, reaching the top, he stopped before the room the innkeeper had indicated. Taking a deep breath, he grasped the knob and opened the door.

A high-pitched shriek greeted his entrance, only to be bitten off at once as the lady recognized her unannounced caller. For instead of confronting an outraged dowager, he found himself face to face with the Viscountess Fieldhurst. She was clad in nothing but her shift and stays, and as his slightly dazed brain registered this interesting fact, she snatched up a pink dressing gown lying on the bed and clutched it to her bosom.

“My lady?” At any other time Pickett would have nobly turned his back on her déshabillé, but such was his sense of shock that gallantry fell by the wayside.

“Sssh!” She started to raise a hand in warning but, as the dressing gown began to slip, apparently thought better of this maneuver. “You must not call me so! Shut the door, and I will explain everything.”

Valiantly if belatedly turning away, Pickett closed the door and shot the bolt home. When he turned back to face her ladyship, he was both relieved and disappointed to discover that she had shrugged on the dressing gown and was in the process of tying the belt about her trim waist.

“The innkeeper had my valise brought up to this room,” Pickett said, gesturing toward the worn leather bag at the foot of the bed.

“Oh!” exclaimed her ladyship. “Is that yours? I confess, when I saw it there, I thought it must be Harold’s. He has so many, it has been difficult to keep up with them all.”

“My lady,” Pickett said, conscious of having conceived a violent dislike for the unknown Harold, “the innkeeper seems to be laboring under the misapprehension that we are man and wife!”

Lady Fieldhurst heaved a sigh. “An entirely reasonable assumption under the circumstances, I fear. It is a long story, Mr. Pickett, and one that does me no credit. I suppose you must wonder why I am in Scotland when I was in London only three weeks ago.”

“I—yes, I suppose I am.” While not uppermost in his thoughts, this home question was far better suited to polite conversation.

“In fact, Mr. Pickett, I am in disgrace with my husband’s family—again!” she added with a rueful smile. “I have been banished to Scotland, you see, with George’s three sons in my care.”

“Ah!” Pickett’s brow cleared at hearing her absence from the theatre so easily explained, to say nothing of the identity of the mysterious Harold. “Then that is why—” He broke off abruptly.

“ ‘That is why’ what?” asked Lady Fieldhurst, puzzled.

Pickett could hardly explain to her ladyship his haunting of DruryLaneTheatre, craning his neck for a glimpse of her in the boxes overlooking the pit. He shook his head. “Never mind. It wasn’t important. But why the false name?”

Now it was her ladyship’s turn to be embarrassed. “As to that, Mr. Pickett, I am afraid I have behaved impulsively, with disastrous results! Harold Bertram, you see, has been having a most difficult time at school, given his sudden change in status. It is not easy for a young man to go from being the heir to a viscountcy to, er, having the legitimacy of his birth invalidated. On the journey north, he confided a wish that he might go someplace where he would be quite unknown. I confess to having had similar feelings myself over the past six months, and so, since the boys had never seen the sea, we decided on a whim to stop here. When Harold wished to further confound any potential gabble-mongers by using a false name, it seemed amusing at the time to grant his request. And since we needed a name that would be unknown in polite circles, I—well, I chose yours.”

“Certainly unknown in polite circles,” agreed Pickett somewhat bitterly, more wounded than he cared to admit by this casual reminder of the differences in their respective stations. “My lady, you are more than welcome to make free with my name any time you may have need of it. Still, I’d best go downstairs and square things with the innkeeper. I believe all the rooms are full, but I’m sure Mr. Colquhoun won’t object to putting me up.”

He rose and would have suited the word to the deed, but she clutched at his sleeve. “Wait! Perhaps I could help you with your investigation, as I did in Yorkshire.”

Pickett shook his head. “That was different. You were embroiled in that case from the first. I can’t implicate you in this one.”

“Can’t implicate me?” Lady Fieldhurst echoed, torn between exasperation and amusement. “My dear Mr. Pickett, who do you think discovered the body?”

At the age of sixteen, Sheri Cobb South discovered Georgette Heyer, and came to the startling realization that she had been born into the wrong century. Although she doubtless would have been a chambermaid had she actually lived in Regency England, that didn’t stop her from fantasizing about waltzing the night away in the arms of a handsome, wealthy, and titled gentleman.

Since Georgette Heyer was dead and could not write any more Regencies, Ms. South came to the conclusion she would simply have to do it herself. In addition to her popular series of Regency mysteries featuring idealistic young Bow Street Runner John Pickett (described by All About Romance as “a little young, but wholly delectable”), she is the award-winning author of several Regency romances, including the critically acclaimed The Weaver Takes a Wife.

A native and long-time resident of Alabama, Ms. South recently moved to Loveland, Colorado, where she has a stunning view of Long’s Peak from her office window.

Readers Entertainmenthttp://dayagency.com
Previous articleA Love Affair with Dracula: The Romanticism of a Vampire
Next articleSneak Peeks Present: Her Winning Formula by Shannyn Schroeder