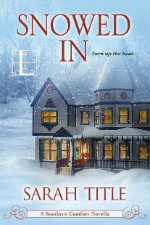 Snowed In: A Southern Comfort Novella

There’s nothing like a hot kiss on a cold day…

Librarian Maureen O’Connell might have predicted she’d find herself crying into the ice cream case at the supermarket after a bad breakup—but she definitely never imagined that a guy hot enough to melt the Rocky Road would flirt with her right there in the freezer aisle. Only Gavin Fraser isn’t a fantasy, he’s a mouth-watering new flavor…

When a freak snowstorm strands Maureen at Gavin’s after just one date, it’s a perfect excuse for something a lot steamier than hot chocolate in front of the fire. It’s definitely lust. Can it also be love?

He was funny and smart and he smelled good and…all of her thoughts were sucked out of her brain as a blast of cold wind hit her in the face. Not just wind. Also snow. A lot of snow.

At least a foot of it.

“I’m glad I wore my snow boots,” she said as they tromped off toward their cars.

“Listen,” Gavin said, stuffing his hands in his coat pockets. “I know you said you don’t want a ride and I’m not trying to be pushy or anything, but I have four-wheel drive, and I’m guessing you don’t.”

She looked at her sensible, compact car, getting more buried by the second. “No, I don’t.”

“Please, for my own peace of mind, will you let me drive you home?”

“Brick won’t mind. I’ll come pick you up in the morning so you can get it. What time do you have to be at work?”

Her brain was overflowing with possibilities. “Eight.”

“Okay, I’ll pick you up at 7:30, plenty of time. You can pay me back by returning my library books.”

“They’re not overdue, are they?”

“Not if you return them tomorrow, they’re not.”

For his own peace of mind. It was the least she could do for him after such a nice date. So she climbed into his SUV and waited while he started it and swept snow off the windows.

As the inside of the car warmed up, her mind raced. Several times at dinner her ex had come up, mostly to mention that they had hardly spoken. He had called once to ask if she had accidentally packed his Dave Matthews CDs (no), and once to ask where she put his ties because he had a job interview (on a hanger on the closet door, right in front of his face). Gavin had tactfully stepped around that minefield. Now, though, she had to admit that Dave was still a minefield for her, and maybe she wasn’t ready for this. Maybe she wasn’t ready to forget Dave and move on to the next guy.

On the other hand, she hadn’t felt like crying at any of those memories, which was a real sign of progress. And there was no saying that this thing with Gavin had to go anywhere. There was chemistry, sure, they had proven that in the grocery store (still blushing thinking about it). So maybe what she needed was to relish some strictly physical chemistry…

On the other hand, she was starting to like Gavin. She’d had a great time with him at dinner. She didn’t want a new emotional entanglement when she was still entangled in an old one.

On the other hand, he was doing her a favor by driving her home. So maybe she could just save him the trip in the morning.

Maureen had long run out of hands by the time Gavin got in the car, rubbing his palms together in front of the heat vents. After a few seconds, he put the car in gear.

By day, Sarah Title is a (sort of) mild-mannered librarian in West Virginia, and by night, she writes funny, steamy, comfort reads. Her first book, KENTUCKY HOOME, was released by eKensington in April 2013, and she has released another book, HOME SWEET HOME, and two novellas, “Kentucky Christmas” and “Snowed In,” with eKensington (now Lyrical). She also contributed to the anthology, DELICIOUS, with Lori Foster and Lucy Monroe. Her newest book, TWO FAMILY HOME, will be released by Lyrical Press in August 2015. Find her on the internet, where she talks mostly about her dog: http://www.sarahtitle.com/ Sarah is represented by Louise Fury with the Bent Agency.