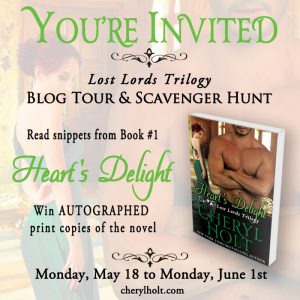 I’m getting ready to release my 40th novel!  It’s a huge career milestone for me, and I hope all of you will help me celebrate by enjoying my new trilogy, “The Lost Lords of Radcliffe.”
The three books are a “real” trilogy, with one story leading into the next and the drama building with each novel.  I’m releasing them over the summer so you’ll be able to read the 2nd and 3rd books right away without having to wait months or years to find out what happens.  HEART’S DELIGHT will be here on June 1st.  HEART’S DESIRE is coming on July 1st.  And Book 3, HEART’S DEMAND–my 40th novel!!!–will be here onAugust 1st.  It will be a great summer of sexy, yummy reading.
The 3 novels will be released as e-books and print books.  The e-version will be available for all e-readers, but the print books will not appear in stores.  They will have to be ordered on-line at Amazon.  The covers are beautiful, the stories breathtaking, heartbreaking, dramatic, and thrilling.  I think it’s my best work yet.
I hope you’ll spend the summer–with me!  And my Lost Lords of Radcliffe.  Coming June, July, and August of 2015.

“Give us another minute,” Anne Blair begged.  “Please?”

There was a sailor guarding the gangplank, and Etherton stoically tarried as the man glared at Anne in exasperation.  He’d already given her five minutes to say goodbye to her children and was unmoved by her plea.

“I’ve been more than accommodating,” the sailor told her.  “If the captain looks down and sees us, he’ll have my head.  We have to make the tide.”

He grabbed her arm to pull her away, and she beseeched, “One more minute!  How can it hurt?”

Etherton tried to intervene, but the sailor wouldn’t be deterred.

“I shouldn’t have allowed this much, Mrs. Blair.  You’re pushing your luck.”

Anne ignored him and spun to her oldest son, Bryce, who was five.  He was a smart boy, a shrewd boy, and she leaned down so they were eye to eye.

“You’ll be in charge of your siblings,” she said.  “Take care of them for me.” 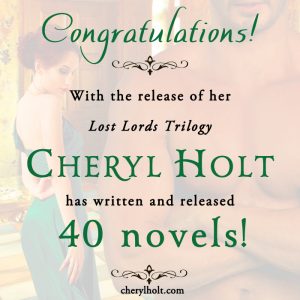 “I will, Mother,” Bryce somberly declared, “but…but…you’ll be back soon, won’t you?”

Anne glanced at Etherton, shame in her gaze.  They’d explained that it would be permanent, that her felony conviction and banishment to the penal colonies in Australia meant she couldn’t return.  But her children were very young, just five, three, and two years old.  How could they be expected to grasp the concept of forever?

“I won’t be back, Bryce.”  Anne sighed with regret.  “We talked about this, remember?”

There was no time remaining for further clarification or debate.  There were only these last poignant seconds of farewell.

“You must be strong for me, Bryce,” she murmured.  “While I’m away, I want to always recollect how strong you are.  Make your father proud.”  At the mention of her beloved, deceased husband, Julian, she shuddered and nearly collapsed.

“I will make Father proud,” Bryce said.  “I will, but he left, and now you’re leaving too.”

“Watch over Sissy, especially.  The world is hard for girls, harder than it is for boys.”

As if recognizing the import of her mother’s words, the smallest child, Annie, whom they all called Sissy, slipped her hand into Bryce’s.  She was blond and blue-eyed, like a porcelain doll, and her sad expression broke Etherton’s heart.  How did Anne bear it?

She turned to her twin sons, Michael and Matthew, and she held out her arms.  Her wrists were shackled, but she reached out anyway.  The twins, being rough-and-tumble scalawags, looked at each other, nodded in agreement that they wished to be hugged, then they let her draw them to her bosom.

Shortly they squirmed away and stared at her, appearing concerned and very solemn.  They seemed to fathom—better than Bryce or Sissy—that something very bad had happened that could never be repaired.

Sissy was next.  She leaned into her mother, and Anne kissed her hair and rumpled her golden curls.

“My little angel.  How will I continue on without you?”

Then she reached for Bryce, but he refused her final embrace.

“Etherton will help you.”

Anne and Etherton exchanged a tormented glance.  Their home was forfeit, their secure existence was forfeit, the life they’d known was forfeit.  There was no home for them any longer, no parents or stability or family.  From this moment on, there would only be chaos and uncertainty. 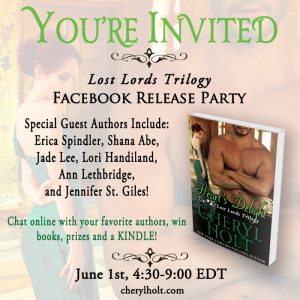 Evangeline Etherton grew up as an orphan and charity case at Miss Peabody’s School for Girls.  But she was always haunted by memories of the loving family and siblings she’d once had.  As a tiny girl, her father passed away, and her mother was wrenched from their lives and transported on a prison ship to Australia.  Her three brothers were cast to the winds of fate and vanished from her life, but she was too young to understand why.

What happened to her mother and brothers?  Might her mother still be alive?  And what about her brothers?  Evangeline vows to learn the answers to those questions and begins her quest to find them and bring them all home.

Three little lost lords, cast to the winds of fate…

MICHAEL SCOTT grew up an orphan on the streets of London. He has no memories of his past, but he’s haunted by terrible dreams and always feels as if he lost something vital and precious along the way. Through cunning and determination, he’s become rich, prosperous, and dangerous. As a brigand and criminal, he knows how to fight and survive any battle. But when he had such a rough beginning as a child, how has he managed to thrive so spectacularly? How can he ever learn the truth?

MAGDALENA WELLS runs a charity mission in London’s worst slums. Although she’s heard many vicious rumors about treacherous, deceitful Michael Scott, when she meets him, she can’t help but fall under his spell. He is the most extraordinary person she’s ever encountered. If ancestry makes the man, how is she to account for his remarkable traits? His drive and accomplishments have propelled him to the highest levels of London society—which is exactly where he seems to belong. How could a ruffian be so brilliant and successful? What is his true history? Can Magdalena help to reveal the secrets he’s always been dying to discover?

Join CHERYL HOLT as she once again weaves a beloved tale of family, loyalty, love, and loss. As the truth about the “lost” lords is gradually revealed, readers will be cheering…

She’s also a lawyer and mom, and at age 40, with two babies at home, she started a new career as a commercial fiction writer. She’d hoped to be a suspense novelist, but couldn’t sell any of her manuscripts, so she ended up taking a detour into romance, where she was stunned to discover that she has an incredible knack for writing some of the world’s greatest love stories.