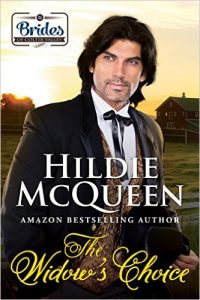 The Widow’s Choice by Hildie McQueen

Comely widow Charlotte Kennedy is in over her head.  Between running a huge ranch and keeping a cruel rancher at arms length, she doesn’t need the added distraction of romance.

Colter Valley calls to Rafe Preston, who decides to purchase land and settle there.  When he accepts a temporary job at a beautiful widow’s ranch, he has no idea how much it will impact his plans.

Charlie stood at the kitchen window looking toward the bunkhouse.  The men had gone there right after dinner, Joe following Rafe and Jerrick after they invited him to play cards.  Joe had taken to the two newcomers and they’d fallen into an easygoing rapport of sorts.

Both Rafe Preston and Jerrick Black were very handsome men.  It still astounded her to find so many good-looking men in one town. It was as if the beauty of the area attracted them. The local McKade men where a striking bunch, all of them with the same devilish green eyes and tall muscular build.

Her thoughts returned to the new ranch hands.  They were as different in looks as night and day. Jerrick was blond with light eyes that caught attention.  He had a playful edge to him, as if always holding back from teasing.

Rafe was the more serious of the two, seeming to measure his words before speaking.  With black hair and the darkest brown eyes, he made one take notice.  Taller than Jerrick, he shrunk a room when entering. Of the two, she took more notice of Rafe. Whenever his dark eyes met hers, it was as if he could see deep inside.  To the most intimate areas, she’d rather keep to herself.

“There’s too much work to be done for daydreaming,” Mary Ellen, Charlie’s friend chided her with a soft smile on her lips. “You thinking about our new ranch hands? They are a handsome duo, aren’t they?”

“Honestly, I barely noticed,” Charlie lied and avoided looking at her friend who carried a cup of tea to the kitchen table.  The cool breeze blew in through the open windows helping air out the overheated kitchen. She glanced once again outside.  The sun’s setting always gave a beautiful glow to the valley.

“Oh!” Charlie scrambled to get off him only to become tangled in her skirts and fall sideways onto the ground, which in turn sent her in a panic that whatever was there would bite her and she climbed back over him.

With wide eyes, she scanned his face.  “Are you all right?”

His hat to the side, he looked dazed.  His brows came together in a frown and he looked up at her.  “There’s a rock under my left side, but other than that I’m fine.  Do you plan to stay on top of me?”

A shiver ran through her and she wasn’t sure if it was the possibility of a snake or of being curled up on top of Rafe Preston.  “I am terrified of snakes.” Her voice shook.  “Is it gone?”

“If it’s smart, it’s long gone with all the ruckus you raised.”

He didn’t move except to adjust sideways.  Probably off the rock pressed into his back.  Finally he lifted his head and looked around.  “Snake is gone.”

Feeling foolish, she scanned the ground around them to confirm he didn’t lie.  When she looked to him, he expression was different.  Darker almost dangerous.  His darkened eyes met hers and she let out a soft gasp.  “Oh goodness, I should get off you, shouldn’t I?”

He cupped her face with both hands, the touch so gentle, it was difficult to fathom it.  “I rather like you just as you are.  If it wasn’t that we are out in the middle of nowhere and looking rather imprudent, I’d say it’s quite pleasant.”

Charlie swallowed, her breath hitching.  “I suppose it is rather comical.” Instead of moving away, she leaned forward and did what she’d dreamed of since the day she’d first seen him.  Charlie pressed her lips against his, amazed how soft they were and how easily he responded.  Not moving, but only kissing her back with a tenderness that brought tears to her eyes.

So there she remained, perched on a man’s chest on the side of a road between her home and Colter Valley. Charlie felt something for the first time in her life.  A passion that filled her to brimming.  A sensation so amazing she wanted to cling to it forever.  Her heart thudded in a fast beat, while her breathing and rush of blood joined the symphony of sensations.

I don’t like bridges, am unreasonably in terror of them..

I worked for the government for thirty years..

One of my favorite memories is when my two daughters and I went for a drive and ended up 300 miles away at the beach in St. Augustine. We spent the entire day on the beach and night in a cheap motel.

Get your copy of The Widow’s Choice at: