SNEAK PEEK: Sin on the Strip by Lucy Farago 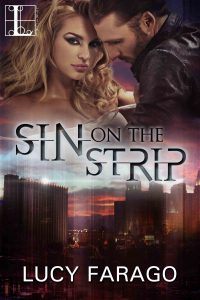 Control is everything to gorgeous Maggie Anderson. Her exclusive club gives abused and troubled women a refuge from Vegas’s merciless streets—and helps her reclaim her shattered sense of freedom. But now someone is brutally murdering those she fights so hard to save. And baring her deepest fears to the one man who insists on protecting her could be the one move she won’t survive…

Elite private investigator Christian Beck knows this particular serial killer’s MO—and his own wrenching failure to find him—all too well. But staying two steps ahead of Maggie’s determination to uncover the truth pushes his well-honed skills past the limit—and ignites his most naked instincts. Now every clue is a lie, each irresistible desire a lethal trap. And the closer he and Maggie get, their shattering secrets will either save them—or torch their lives to glittering ash…

In her office, the adrenaline gluing Maggie together evaporated, leaving her a mass of unhinged bones. What she’d seen at the morgue would be carved in her mind forever. And the smell. The aroma of death and antiseptic blended with the nauseating reality of yet another young life cut short. Seven years ago she’d promised herself, never again. Yesterday that promise had been broken. It was unrealistic to think she could save them all, the women or the runaways she met on the streets. Some refused to see past their next hit, or life had made them too wary of others. But she wanted to do more, needed to do more. Heather’s murder had slapped Maggie in the face, told her she wasn’t doing enough.

A dead runaway in her Dumpster had taught Maggie what could happen if someone didn’t reach out, but Juan Desilva, a depraved human trafficker, had robbed her of the ability to work front line. She couldn’t earn their trust if she wasn’t there every day. She too had lost the ability to trust, to trust that she could defend herself should the situation call for it. That sick bastard had made her doubt herself.

It had been her decision to sniff out why women had been disappearing off the streets, but still Horace blamed himself. She’d been bringing him useful tips for weeks but he’d failed to make the connection with Desilva. Stupid. She’d made the bad call to go in and not wait for the police. But he’d already killed one woman. She couldn’t let him kill another. Horace had arrived in time to save her and the other twenty women, but by then Maggie’s courage had been tested and failed. A gun in her hand, she hadn’t been able to pull the trigger.

Lucy Farago knows there is nothing like a happy sigh at the end of a good book. With the encouragement of her loving husband, she wrote her first manuscript. An unpublished historical, it sits in a file on her computer, there to remind her how much fun she had learning the craft and becoming part of an industry whose books make you believe anything is possible. A big fan of Agatha Christie, she set out to write her first romantic suspense novel. Thrilled to be a published author, Lucy also teaches yoga, enjoys cooking, and saying what other people are thinking. In her fantasy world, her beautiful Siberian husky, Loki, doesn’t shed and her three kids clean up after themselves. Alas, that fantasy will never see fruition. You can learn more about Lucy on her website.