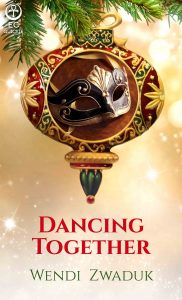 What happens in Vegas at Christmas stays in Vegas…

Jordy Murphy isn’t the warm, fuzzy family type. Instead of getting together with all the newly minted couples in his family, he is in the center of sin, decadence and sex for the holidays. He craves the lights, the Christmas glitter and dancing with sexy women when he spots the one woman he hoped to see, but never expected to be there—Ally.

Allyson Benson wants Jordy Murphy in her stocking for Christmas. No other present will do, so she’s pulling out all the stops to show him a sexy time. Will their relationship extinguish faster than Christmas candles or do they have the passion to last throughout the season?

“I need some Christmas cheer.” Jordy Murphy stood in front of the mirror in his Las Vegas hotel room and groaned. He raked his fingers over the top of his head. He’d cut his hair the week before and still wasn’t sure about the new look. The shorter ’do was too severe. He preferred the longer, floppy style with highlights streaked into his blond hair. The change wasn’t awful, just different—and he’d be able to hide it under a Santa hat anyway.

He adjusted his tie, emblazoned with snowballs, then smoothed out the suit coat. He snorted. The outfit was rather formal for clubbing in Vegas, but he wasn’t headed to just any club on any given night. This was Christmas Eve. According to the e-invite he’d received, he was to go upstairs to Club49 for the holiday extravaganza. Fifty bucks a head with all drinks and a buffet included as well. Unless the unnamed item had the name of the club emblazoned on it, he’d re-gift to his brother or sister.

He turned away from the mirror and fiddled with the band on his smart watch. The device had been the best investment and his Christmas present to himself. He’d inputted his identification and credit card information so he wouldn’t have to worry about losing his wallet at the party. As he swiped across the screens on his watch, he noticed an image. His breath clogged in his throat. Allyson Benson. According to her email, she’d be in Vegas at the same party. She’d been the reason he’d decided to duck out of Cleveland in favor of the lights in Sin City. Was she really waiting upstairs? He wasn’t sure, but he knew he wanted her in his stocking for Christmas.

The lights on the Strip flashed in his hotel room. He’d left the curtains for his bank of windows open. The play of color calmed him. He strolled over to the wall of glass and gazed out at the strip below. No snow, unlike Cleveland and northern Ohio. Back home, his favorite state was buried in a foot of the white stuff. He glanced up at the sky, expecting to see stars, but there were none. He liked stars.

For a moment he wondered if there was any peace on the Strip. There probably wasn’t much silence back home. He shuddered. He loved his brother and sister-in-law as well as his sister and brother-in-law. Hell, he’d been the best man in both of his brother Corey’s weddings. He shook his head. Only Corey could fuck up his love life and still come out on top. Katie, Corey’s wife, had more patience than a saint to put up with Corey and to marry him twice.

Jordy pinched the bridge of his nose. Maybe it was the jet lag from the long flight or the time change, but part of him wished he wasn’t going to the party. A tiny bit of him wanted to be home with his family—despite the fact that they drove him berserk. He wasn’t about to listen to more baby talk or help his sister and brother-in-law decide on baby names. So they were going to make him an uncle? Wonderful, but he didn’t give a shit what they named the kid. Was that bad? Did that make him an awful uncle? Oh well.

Something his father said came to mind. “Never stick with one woman and never let anyone tie you down.” His father certainly lived by that motto. Each of his children was created with a different woman. When Dear Old Dad showed up for a family gathering, he had a new female on his arm. Jordy wished his father would’ve stuck with one woman to birth his children—that would’ve made life easier and removed most of the tension from the holidays. But no. Gary Murphy needed to keep his love life interesting. Jordy swore he’d never turn into a womanizer like his father.

At least his family wouldn’t be in Vegas for Christmas.

Thinking about children and relationships made his head ache. This was Christmas. He should be wanting to get together, not shove them all aside. He wasn’t good at relationships and loved his somewhat easy life. He spent a lot of time on his own. Being alone was great to a degree—he didn’t have to answer to anyone and could do things at his own pace. He didn’t have to worry about letting someone down. Sometimes, though, he wanted to share his life with someone.

His thoughts traveled to Allyson again. He sat on the bed and stared at her picture on his watch. He liked her and liked the way she fit in his arms. He dreamed about her kiss. Her laugh always brought him out of a bad mood. She’d been the one to suggest the trip and even gave him space. She was good for him and smart to boot.

So why wasn’t he with her in her room? Or in adjacent rooms? Because she’d claimed she didn’t want to intrude on his life if he decided to hook up with someone else for the holidays.

What if Allyson was the hottie he wanted to snuggle up with for Christmas? She could be the woman who played with his Yule log. He snorted. What a bad joke. He wasn’t huge, but he made do with what the good Lord had given him. Allyson seemed to like his dick. He smoothed his hand over the growing bulge in his pants. He wanted to find Allyson, bring her to his room and decorate her in whipped cream for the holidays. She liked to use toys in the bedroom. Maybe they could find a twenty-four hour sex shop and buy a little more Christmas cheer.

His phone beeped, bringing him out of his mini-fantasy. He sighed. He needed to head upstairs to the party, but he couldn’t get her out of his brain. What if she wasn’t there? What if Allyson paired off with someone else? He wasn’t sure he wanted to see her with another man. He’d kept things casual with her, so he only had himself to blame if she did decide to dump him for good.

He’d worry about her later. She might not be there, but there was a chance she’d come to Vegas and wanted to heat up the holidays with him.

Jordy stood and removed the Santa hat long enough to don the mask. Wearing a masquerade mask for the duration of the party seemed a little much, but whatever. He unzipped and loosened his belt. He needed to tuck his keycard into the little pocket inside his dress pants. Jordy locked his keys and wallet in the room safe, then strolled out of the room in the direction of the elevator. He pressed the button and while he waited for the car, he noted the eight doors in the hallway leading to various rooms. Getting a suite proved to be smart and secluded. He had more room and fewer people to deal with in the elevator. Would he run into Allyson? He hoped so.​

Dancing Together is available at:
All Romance eBooks
Ellora’s Cave
Amazon

Readers Entertainmenthttp://dayagency.com
Previous articleSNEAK PEEK: The Highlander Who Loved Me by Adrienne Basso
Next articleMost Checked Out Books of 2015