SNEAK PEEK: Only You by Cheryl Holt 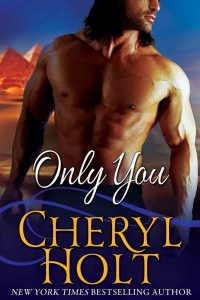 Only You by Cheryl Holt

CHERYL HOLT does it again with another fast-paced, dramatic tale of seduction, passion, and romance. This time, love blooms on a lazy, decadent trip down the Nile!

Lady Theodosia Postlewaite, known as Theo to her family and friends, has always had the worst luck. On the night her betrothal was to be announced, she was unwittingly caught in a compromising situation. With her engagement ended and her reputation in tatters, her incensed father demands she flee the gossip by accompanying her dour, grumpy aunt on a sightseeing trip to Egypt. Theo reluctantly agrees, and she’s determined to spend the months abroad proving she possesses the highest moral character. Most especially, she vows to never so much as speak to a handsome man ever again.

Soloman Grey has lived in Egypt for the past decade. His own scandal chased him out of London, and he’s built a new life for himself as an adventurer and explorer. Because of the gossip that ruined him, he doesn’t trust anyone, and he constantly vows that heâ€™ll never so much as glance at a pretty woman ever again.

But when Soloman meets Theo, he’s dragged into her world in a dozen ways he never intended. She’s beautiful, funny, and lonely, and he can’t resist. Yet, he’s the bastard son of an earl, so he could never be worthy of her. When her relatives would do anything to keep them apart, dare he risk all to have her for his very own?

An excerpt from Chapter 3…

“You shouldn’t be out here with me, Lady Theo,” he murmured.

“No, I probably shouldn’t be.”

“There’s no predicting what I might do to you.”

“You’re pretending to be awful again.  Don’t try to scare me.  You can’t.”

He was staring at her with such an intense focus, and she’d never had a man look at her like that before.  Well, Lord Trent had, but his attention had been feigned.

What about Mr. Grey?  Was he a roué?  Was he a practiced seducer?  If he was, she needed to shove him away and hurry back to the party.  If he wasn’t, if he was gazing at her with such strident regard because he…he…had decided she was marvelous, then she wanted to remain where she was.

She’d been a forlorn little girl and had grown up to be a forlorn young woman.  The future didn’t bode well for her to ever have a beau or another fiancé or a husband or a family, so there wouldn’t be many occasions where a man would meticulously assess her as he was.  She couldn’t bear to have the moment end.

She was charmed by the compliment.  “Do you think so?”

“Why?”  She mockingly batted her lashes.  “If I stay, will you ravish me?”

“No, but I’ve had too much to drink, so you shouldn’t dawdle.”

“You would never hurt me.”

He actually laid his hand on her waist, and he drew her to him so the entire front of her body was crushed to his.  The sensation was riveting.

She peered up at him, curious as to what he was planning.  Prior to her meeting Lord Trent, she hadn’t realized two strangers might share illicit kisses, that an embrace could be sweet and very fulfilling.  She wondered if a comparable event wasn’t about to transpire again, and she had to admit she wouldn’t necessarily be averse.

She’d had limited experiences with men.  Did they always make such suggestive passes when they were alone with a woman?  Or was she unwittingly encouraging men to behave as they oughtn’t?

If it was something she was doing, she had no idea what it might be, but she definitely had to stop doing it.

You can purchase ONLY YOU at: 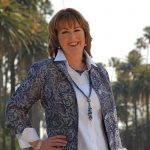 CHERYL HOLT is a New York Times, USA Today, and Amazon “Top 100” bestselling author who has published over forty novels.

She’s also a lawyer and mom, and at age forty, with two babies at home, she started a new career as a commercial fiction writer. She’d hoped to be a suspense novelist, but couldn’t sell any of her manuscripts, so she ended up taking a detour into romance where she was stunned to discover that she has a knack for writing some of the world’s greatest love stories.