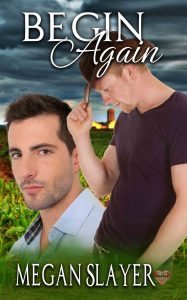 Begin Again – A Take a Pause Story  By Megan Slayer

Taking a pause just might be the cure for his broken heart.

Denver Chalmers thought his world completely collapsed when his twin brother, Deiken, committed suicide. Instead of succumbing to the depression, he took a long breath and kept pushing forward with his life. But he’s not really living. Will a chance meeting at the cemetery be the first step toward his salvation?

Jett Dawson shared Denver’s view of the world. Deiken had been his everything, but their seemingly perfect relationship hid a multitude of problems. Jett won’t forget about his past, but he’s ready to move forward. He’s always had a crush on Denver and although he’s been told its wrong, he wants Denver in his life on a romantic level. Will their common ground and mutual desire lead to disaster or something they both need?

Footsteps crunched on the dry grass. He glanced over his shoulder. He wasn’t sure why, but he’d expected to see his ex-boyfriend Mike. Maybe they weren’t good together, but Mike had a way of knowing when Denver was low. He focused on the person walking up to him.

Recognition swept over him. He knew the man. Jett Dawson, Deiken’s partner.

Oh shit. The last time he’d spoken to Jett, they’d argued. Jett screamed at him and he’d called Jett an asshole. Back then, he hadn’t known the score and blamed Jett for his brother’s passing. Now he knew better.

The guilt came rushing back to Denver. He wasn’t sure what to say to his twin’s partner.
“Denver.” Jett stopped beside him.

“Jett.” He wanted to be cool and not lose his temper. Deiken’s actions were his own–not Jett’s fault. Besides, Denver had blown his chances at conversation in the past. How did he know now would be different?

“I miss him,” Jett said. He stuffed his hands into his board short’s pockets. “It’s not the same at the plant without him.”

“I bet.” He turned his attention to Jett, but didn’t really see him.

“I come here a lot. I must miss you, since this is the first time I’ve run into you in six months.” Jett sighed, then faced away from the grave. “Can–can we talk? Not exchange pleasantries, but really talk? Not here.”
Denver paused. This could end up therapeutic or really bad. They tended to argue, not talk. But still. If Jett needed someone, he’d try to be there. “I’ve got coffee at the house and it’s quiet. Or lemonade.” He’d always been attracted to Jett, but never said anything because of Deiken. Jett wanted his brother, not him. Then Deiken passed and the argument happened. He doubted once he and Jett talked that Jett would have much to do with him, but he’d give the conversation a shot.

“Want a minute alone with Deik? I can head to the farm and start the coffee.” Truth be told, he simply needed some separation from his brother’s partner.

“I’m good. I’ve talked to him so many times. Not just here. We talk at the office, the apartment and when I run.” Jett chuckled. “I bet he’s tired of hearing from me.”

“Nah. He loved you.” Denver knew that down to his soul. Deiken always discussed Jett and their life together. “You were his world.”
“Sometimes things aren’t what they seem.” Jett started away from Denver, then paused. “Let’s go to the farm. I know the way.”Available at:
MLR Press
Amazon
AllRomance Ebooks

I’ve always dreamt of writing the stories in my head. Tall, dark, and handsome heroes are my favorites, as long as he has an independent woman keeping him in line. I love playing with words and letting the characters run wild.NASCAR, Ohio farmland, dirt racing, animals and second chance romance all feature prominently in my books. I also write under the pen name of Megan Slayer. I’m published with Total-E-Bound, Changeling Press, Liquid Silver Books, Turquoise Morning Press, Decadent Publishing and The Wild Rose Press. Come join me for this fantastic journey!
Find out more about Megan at:
http://wendizwaduk.com/
http://about.me/wendi_zwaduk