SNEAK PEEK: When A Marquis Chooses A Bride by Ella Quinn 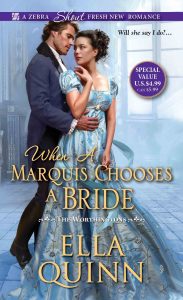 When A Marquis Chooses A Bride (The Worthingtons, Book 2) by Ella Quinn

Thanks to their large extended family and unconventional courtship, the Worthingtons have seen their share of scandal and excitement. But nothing has prepared them for this…

The Dowager Lady Worthington isn’t quite sure what to make of country-girl Dorothea Stern. As the granddaughter of the Duke of Bristol, Dotty is schooled in the ways and means of the nobility. But her sharp wit and outspoken nature has everyone in a tizzy. Especially their cousin, Dominic, the Marquis of Merton.

Prematurely stuffy, Dom was raised by his cheerless uncle to be wary of a host of things, including innovation, waltzing, and most perilous of all: true love. Still, there’s something about Dotty, beyond her beauty, that Dom cannot resist. But the odds are against him if he intends to win her as his bride. Will he choose loyalty to his family—or risk everything for the one woman he believes is his perfect match…

Eunice, Marchioness of Merton, paced her elegantly appointed parlor decorated in various shades of blue. Dominic should be home at any time now. She turned to her cousin and companion of many years, Miss Matilda Bradford. “Do you think I was too highhanded in removing Dominic’s belongings from the hotel?”

Matilda gave Eunice a quizzical look. “It is not whether I think you were managing, but whether he thinks it.”

Eunice sat perched on the sofa under a bank of windows overlooking the back garden. “Well, I suppose it does not matter. He is going about this wife business all wrong. When he sent me the list of ladies he was considering, I could have screamed with frustration. Not one of them has the will or desire to stand up to him. They will all nod and simper, happy to be the Marchioness of Merton. Worse, they will assist him in becoming more set in his ways than he already is. A stodgier twenty-seven-year-old man I have never known. His poor papa must be rolling in his grave.”

Matilda pulled a face. “I agree, but it is not entirely Dominic’s fault.”

“No, you’re right. My brother, Alasdair, never should have been named Dominic’s guardian. One could not doubt his sincerity, but he was determined to make Dominic aware of his duty and consequence. The result has been a disaster. Did you know that Worthington’s sisters call Dominic “His Marquisship?”

Matilda gave a dry chuckle. “I had heard something to that effect.”

“It is embarrassing to have such animosity in the family.” Eunice stood again. “Now that Louisa is making her come out, it cannot be hidden. I am determined he shall not remain the butt of fun to most of Polite Society. We must find Dominic a young lady who will have enough influence over him to make him rethink his views. We live in modern times. As the Marquis of Merton, he should be leading the way, not hanging behind with the older generation.”

Matilda gave Eunice a dubious look. “How do you propose to do that, pray tell?”

“It is simple. He must fall in love with a woman who will challenge his beliefs.”

“But, Eunice, you know how difficult that will be. Most girls and their parents would give their eyeteeth to marry a marquis. They will agree with everything he says just to be a marchioness.”

Her cousin was right. Trusting that Dominic would accidentally find the right lady was fool’s work. “Make a list of the most liberal families in Town and tomorrow we shall begin visits. Dominic always escorts me to my entertainments. He may not like it, but I shall insist we attend those events first. I am determined to find someone suitable.”

“He will, assuredly, not like it.” Matilda went over to the small writing desk. Taking out a sheet of paper she started to write. “However, this will, at least, point us in the right direction.”

An hour later, Eunice called for tea, and Dominic entered the room coming straight to her. Concern coupled with irritation etched his handsome face. “Mama, is everything all right? When did you arrive?”

She laughed and offered her cheek for him to kiss. “Everything is fine. We arrived shortly after noon. I called at your hotel, but you had gone out. Since you always stay at home when I am in Town, I saw no reason not to assist you, by having your belongings brought here.” She raised a questioning brow. “Was I in error?”

She took his hand and led him to a small sofa. “Come, let us be comfortable.”

Dominic gave her a quizzical look. “Why are you here, Mama? I thought you’d decided to eschew the Season this year.”

She regarded him, careful to give nothing away. “It seemed as if everyone in the neighborhood was gone, and life became very dull. Matilda and I decided we needed more diversion than the country was going to give us.”

He searched her face for a moment. “Is that the only reason?”

“Of course it is.” She held his gaze and lied. “What other cause could I possibly have?”

“I sent you the list,” he said. “It did cross my mind that you might be taking an interest in the subject of my marriage.”

Eunice gave him a wide-eyed look. “My dear son, that is a matter for you to decide. I would not dream of interfering.”

You can purchase When A Marquis Chooses A Bride at:
Amazon
Barnes & Noble
Kobo
GooglePlay
Books-A-Million
Powell’s
iBooks 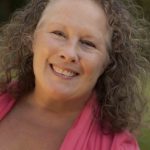