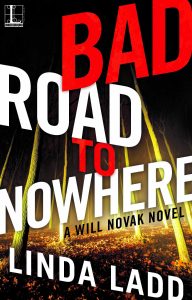 Welcome Linda. I understand that you have a new series coming our way, Linda.  Why don’t you tell us about it?

That’s right, I do.  I’m very excited and would love to share my good news with my readers.  I have recently started writing a second series as a spin off from my Claire Morgan suspense thrillers!  This series will feature Will Novak, who was introduced in Claire Morgan Book Eight, Devil Dead, when he came aboard as Claire’s partner in her new private investigation agency.  He also made a significant appearance in Gone Black, Claire Morgan Book Nine.  His books are somewhat different from Claire’s novels but still filled with plenty of action and mystery.  I will continue the Claire Morgan thrillers as well, with the two series alternating publishing dates.  Both Claire and Novak will appear in each other’s books as secondary characters.

As an introduction to Will Novak, here is Claire Morgan’s take on him during their first meeting when she interviewed him to be her PI partner:

His hand was so big that hers felt almost lost inside the long fingers and work-hardened palm.  Apparently, Black wanted her to work with Paul Bunyan.  He looked about six-foot-six or –seven inches tall, maybe, a little taller than Black, and a lot more thick with muscles and the quiet attitude that sometimes goes along with very strong and physical men.  He exuded masculine confidence.  He appeared the kind of man that other guys in a bar would avoid antagonizing.  He was not movie star good looking, not by a long shot, but not bad to look at, either.  Rugged was the word, she guessed.  But she liked rugged.  On the other hand, he was super intimidating.  That’s what she got from him most of all.  He had blond hair, dark blond, cut pretty short, ex-military most likely, and probably to help control the curly texture that showed itself in his side burns, if she had to guess.  Large and very dark blue eyes looked straight into her own, as if searching for the basis of her being.  The look inside those eyes seemed so deep and wise and long suffering, she felt sure he had lived and loved and fought and killed and seen death and destruction and depravity and disappointment and loss and had learned how to deal with it the hard way.  He had a long, narrow scar that ran out of his hairline on the left side of his face, down through is sideburn, and then jagged back toward the nape of his neck.  It looked like an old and very ugly knife wound, like somebody had tried to slit his throat and failed.  Yep, he had the look of someone who had dealt with many a terrible thing in his life and would look at many more in the future.

Novak’s first book is called Bad Road to Nowhere and is scheduled to be released on December 6, 2016.  Will Novak is indeed a big tough ex-Navy SEAL and somewhat of a knight in shining armor who helps his friends who are unable to help themselves when confronted by evil or injustice.  He also has a tendency to step into some very dangerous situations along the way, much like Claire and Black usually do.  😉  He has suffered for decades over the loss of his wife and children on Nine Eleven when the south tower of the World Trade Center crashed down with all of them inside.  Even though it has been over a decade, Novak cannot get over the deaths of his entire family in that one tragic instant and spends every September 11 out in the middle of the Caribbean Sea aboard his sailboat, all alone with his grief, getting drunk and mourning his loved ones.

In the first book, Novak hooks up with his dead wife’s sister to rescue her childhood friend who she believes is being held against her will in the mountains of north Georgia.  He despises his Australian sister-in-law, a selfish and conniving woman that has caused him nothing but trouble, but decides to help her because he knows his beloved wife would want him to.  That’s when he finds himself on that Bad Road to Nowhere, I’m afraid.  Hope you get a chance to give Will Novak a try.  He’s a good guy.  I think you’ll like him.

The second book in the Will Novak thriller series is Say Your Goodbyes and has a publication date of June 6, 2017. This time he gets caught up with a young woman that he rescues while at sea.  Unfortunately for him, that well-intentioned Good Samaritan act gets him into a truckload of trouble.  He doesn’t know who she is or where she came from, but he finds out really fast that she has a lot of bad guys hot on her heels.  This one was a lot of fun to write, too!  Hope you enjoy it!

Readers love your Claire Morgan homicide detective series.  How many books are there in this particular series and what are the titles?

There are nine Claire Morgan thrillers to date.  The last one was Gone Black and came out in January 2016.  Most readers found it an edge-of-your-seat thriller with Claire and her friends trying to rescue Black from his sworn enemies.

How did you come up with the Claire Morgan character?

I wanted to write a really strong and intuitive female lead.  Claire is a smart woman who loves her job as a homicide detective (and later a private investigator) and puts her career above everything else, at least until she leaves the LAPD and moves to Missouri in Book One, Head to Head.  I like multi-dimensional characters so I gave her a tragic and complicated past that I wanted to use in shaping her emotional roles as a woman, a friend, and a lover.  She is unique in the way she approaches her job, and her investigative work means everything to her.  Claire’s past heartache and personal losses have caused her to build up so many defense mechanisms and internal walls that she rarely lets anybody see what she thinks or feels.  When she meets Psychiatrist Nicholas Black, her love interest in these books, she finds her life begins to change in lots of ways, and she feels vulnerable and isn’t sure she likes it.

The characters in your books are extremely likeable.  People seem to identify with them, especially with Claire Morgan.  You also create some interesting relationships and dynamics among your secondary characters as well, including the villains with their own storylines.  How do you do that?

When I write a character, I try to make him or her as real to life as I possibly can.  In many ways, Claire is a typical American woman.  She likes to eat at McDonalds.  She shops at Walmart.  She watches Bruce Willis movies with one of her criminalist friends.  She loves Snickers bars, especially if they’re frozen.  She teases her partner about being so neat.  She works hard and doesn’t make a whole lot of money.  She wears jeans and T-shirts and high-topped Nikes and could care less about high fashion or makeup or looking pretty.  She isn’t always happy and carefree.  She isn’t always in a good mood.  She does not have a lot of girlfriends outside of law enforcement because law enforcement is all she thinks about.  She has her own take on people and situations, and that opinion is often laced with dry humor.  I think it’s important to bring some comic relief into my suspense thrillers, just to take the edge off the killer’s dark deeds.

But I don’t write a super hero who can do anything and always comes out on top, unscathed, hands on hips, cape flapping in the wind.  Claire gets hurt at times when she deals with the brutal serial killers that she pursues.  So do real cops.  They put their lives on the line every day for the rest of us.  She does, too.  Nicholas Black thinks at first that Claire has a death wish, but she really doesn’t.  She fights for the homicide victims and their families and the justice she can give them by bringing in the killers who took their loved ones away forever.  Her detective job is her life, at least until she meets Nicholas Black.  He brings added dimension to her character as they fall in love, and her character grows with every book.  That’s important to me as the writer, to incorporate the lessons learned in one book into the characterizations in the following novels.  Since Claire has little family left, she interacts with her law enforcement friends and is loyal to a fault to all of them.  But just like those old Canadian Mounties, Claire always gets her man.

Not many people know their way through the bayous well enough to find Will Novak’s crumbling mansion outside New Orleans. Not that Novak wants to talk to anyone. He keeps his guns close and his guard always up.

Mariah Murray is one selfish, reckless, manipulative woman, the kind Novak would never want to get tangled up with. But he can’t say no to his dead’s wife sister.

When Mariah tells him she wants to rescue a childhood friend, another Aussie girl gone conveniently missing in north Georgia, Novak can’t turn her down. She’s hiding something. But the pretty little town she’s targeted screams trouble, too. Novak knows there’s a trap waiting. But until he springs it, there’s no telling who to trust . . .

You can purchase Bad Road to Nowhere at:
Kensington Books 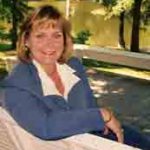 Linda Ladd is the bestselling author of over a dozen novels. Head to Head marked her exciting return to publishing with a debut thriller after almost a decade’s hiatus. Linda makes her home in Poplar Bluff, Missouri, where she is at work on her next novel featuring Claire Morgan.