SNEAK PEEK: Return To Shepherd Avenue by Charlie Carillo and Can You Go Home Again? 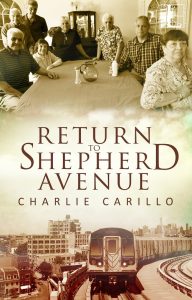 RETURN TO SHEPHERD AVENUE, AND THE ETERNAL QUESTION…CAN YOU GO HOME AGAIN?
by Charlie Carillo

You’ve written millions of words since “Shepherd Avenue” was published, but there’s something really special about that first novel.

You still remember that magical phone call from your agent, all those years ago: “Go celebrate! ‘Shepherd Avenue’ has been sold!”

Oh, man.  You can hardly believe it.  You’re going to be published!  You say it to yourself over and over, right until the day you actually hold a copy of that novel in your hands, hot off the press.

The book gets good reviews.  It’s the story of a sensitive ten-year-old boy who spends a turbulent summer at his grandparents house in a rough Brooklyn neighborhood after his mother’s death in 1961.

The house that inspired the story is the one your real-life grandparents lived in, on Shepherd Avenue in Brooklyn. You spent a lot of good times there when you were a boy, and one morning all these years later, a strange thing happens:

You wake up and can’t stop wondering if that old house is still standing.

You do more than just wonder.  Like an aging homing pigeon, some primal instinct has you in its grip, taking you on that long subway ride back to Shepherd Avenue.

Your legs tremble as you reach the red brick house.   It’s a different neighborhood, now.  The windows have bars over them and the driveway is gated, but otherwise the house looks just as it did when you were a kid.

Everybody you knew from the old days is long gone, but the memories come flooding back, and that’s when the craziest “What if” of your literary life strikes like a bolt of lightning:

What if the troubled little boy from ‘Shepherd Avenue’ is now a troubled man in search of peace he’s never been able to find? What if he thinks he can find that peace by moving back into Grandma’s old house?

And as long as we’re being totally crazy: What if he knocks on the door of the Shepherd Avenue house and offers to buy it from the startled present-day owner, just like that?

There’s your story.  That troubled man buys the house and moves into it.  Nothing but strangers on the block, now, but he doesn’t care.  He’s on a mission to make sense of his life with this trip to the past.

Meanwhile, the present will prove to be just as exciting as the past, with a beautiful and passionate young woman living just across the street….she’s every bit as lonely as he is….

Oh yeah.  Now you’re cooking!  You get back on the subway.  You can’t wait to get home and start typing.

That’s how “Return To Shepherd Avenue” was born, fifty years after the original story.

The legendary Thomas Wolfe famously said You Can’t Go Home Again, but you know better than that.  You can indeed Return to Shepherd Avenue.

Just don’t be surprised by what you’ll find, because many things can happen in fifty years.  Amazing, heartbreaking, wonderful things.

Acclaimed author Charlie Carillo revisits Shepherd Avenue, the novel that sparked his career, in a witty, moving story about growing older and (sometimes) growing up . . .

For the second time in a few weeks, Joey Ambrosio has done something reckless. The first incident—climbing to the top of the Brooklyn Bridge to scatter his father’s remains—earned him newspaper headlines and court-ordered therapy. This time, he’s doing something arguably even more dangerous: buying his grandparents’ old house in the rough Brooklyn neighborhood where he spent an idyllic summer half a century ago.

With boarded up stores and bars on every window, Shepherd Avenue sure isn’t the way it used to be. Then again, neither is Joey. In 1961, he was a newly motherless kid trying to find his way. Now a successful children’s book author estranged from his grown daughter, he’s viewed with suspicion by his new neighbors—and with amusement by the beautiful Puerto Rican laundress across the street. Amongst the colorful misfits of his past and present he’s hoping to heal old wounds, forge new bonds, and figure out what exactly brought him back here . . . and how, at last, to move on.

You can purchase RETURN TO SHEPHERD AVENUE at:

About the Author:
Queens-born Charlie Carillo was a reporter and a columnist for the New York Post before becoming a producer for the TV show “Inside Edition.” His first novel, Shepherd Avenue, was named a Notable Book of the Year by the American Library Association in 1986. He is also the author of My Ride with Gus, Raising Jake, One Hit Wonder, Found Money, God Plays Favorites and The Man Who Killed Santa Claus: A Love Story.

Charlie now divides his time between New York City and London, England, where he works as an independent television producer. He is a frequent contributor to the Huffington Post. Visit his website at charliecarillo.co.