SNEAK PEEK: OPTICAL DELUSION by Hunter Shea and His Run-in With 3D Glasses! 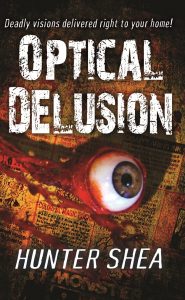 Back when I thought a three-speed bike with a banana seat was the coolest thing ever, a local TV channel changed my life. On a hot summer night, they were going to show The Creature from the Black Lagoon…in 3D!

Growing up a Universal monster fan (thanks Dad), I’d seen the Creature a couple of times when it was shown on PBS, along with Frankenstein, Dracula and The Mummy. But, I had never, ever seen it, or any movie, in 3D.

Special cardboard 3D glasses were handed out free of charge at the 7-11. My father picked up four pairs for the family, though we only needed three because my sister hated monster movies. Remember the old 3D glasses? One lens was blue, the other red, the sharp cardboard cutting into your ears. Quality stuff.

The big night came. I was in charge of popping popcorn and getting the drinks ready. We donned our glasses and sat in rapt attention as the misunderstood Gill Man was naturally smitten by the beautiful Julia Adams and paid the price for unrequited love. Thanks to the cheap glasses, the image was blurry, headache-inducing and revealed very little in the way of actual 3D. No matter, I loved it, and that night cemented The Creature from the Black Lagoon as my favorite monster movie.

For the rest of the summer, I wore those 3D glasses as I bopped around the neighborhood. I don’t know if I thought I was cool or just trying to be different. Knowing my history, I’d bet on the latter.

If wearing those glasses during a movie made for them was uncomfortable, using them for everyday use was torture on my orbs. Old school 3D glasses should have had a warning label on them. Sure, my eyes throbbed, vision went fuzzy and my head pounded, but I was the kid with the 3D glasses!

Did that stop me from wearing them? Nope. I was a true rebel without a cause or a concern for his eyesight.

My parents wisely prevented me from ordering X-ray specs that were advertised in every comic book because they worried I’d eventually go cross-eyed or worse. So, I may have gained a lifelong love of The Creature from the Black Lagoon, but I lost out on some prime comic book mail order fodder.

Which is why I went into my wayback machine and relived the glory of poor eyeglass choices and wrote Optical Delusion. I may not have been able to wear X-ray specs, but no one can stop me from writing about them. And my parents were right, wearing them could lead to some very, very bad things that make cheapo 3D glasses look tame as newborn kittens.

Open Your Eyes With “X-Ray” Vision!

Put on a pair of “X-Ray” glasses and things will never look the same! These almost magical specs will make you the hit of the party! Astonishing three-dimensional X-Ray visions of what your friends—and girls—look like under their clothes! And all for just $1.

Martin Blackstone punishes his son for wasting his allowance on a pair of flimsy cardboard sunglasses X-ray vision . . . yeah, right. Martin tries them on just for the hell of it—and all they do is give him a headache . . .

Until he sees things he can’t possibly be seeing. Glimpses of things on the other side of a wall or beneath someone’s clothing. He wants to believe it’s just his overactive imagination but the “X-Ray” specs actually work. Then the fun novelty becomes a waking nightmare when the glasses burn into his face and he starts seeing horrifying apocalyptic visions no mortal man was ever meant to see. Images that alter his very personality—from a husband and father to a bloodthirsty homicidal maniac . . .

Because sometimes you can see too much. 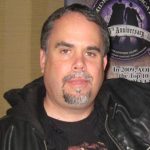 Hunter Shea is the product of a misspent childhood watching scary movies, reading forbidden books and wishing Bigfoot would walk past his house. He’s the author of over 17 books, including The Jersey Devil (Pinnacle 2016)), Tortures of the Damned (Pinnacle 2015), and We Are Always Watching (Sinister Grin). Hunter’s novels can even be found on display at the International Cryptozoology Museum. The Montauk Monster (Pinnacle 2014) was named one of the best reads of the summer by Publishers Weekly. He was selected to be part of the launch of Samhain Publishing’s new horror line in 2011 alongside legendary author Ramsey Campbell. His video podcast, Monster Men, is one of the most watched horror podcasts in the world. Living with his crazy and supportive family and two cats, he’s happy to be close enough to New York City to see the skyline without having to pay New York rent. You can follow his travails at huntershea.com.