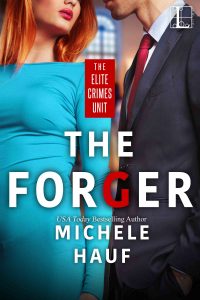 When Interpol’s covert behind-the-scenes Elite Crimes Unit looks for new talent, they recruit someone who knows all the tricks—and sometimes a troublemaker is exactly who’s needed for the job…

Olivia Lawson’s bosses at Scotland Yard don’t take her work very seriously. Art and antiquities? Bor-ing! But her latest investigation, at London’s world-renowned Tate, is turning out to be far more explosive than anyone expected. In fact, the vandalized, booby-trapped painting hanging on the gallery wall would have blown her off her feet if it wasn’t for the tall, dark-haired stranger who tackled her at the last second—a stranger as finely sculpted as any masterpiece in the museum.

Ethan Maxwell is working this case for the Elite Crimes Unit because it was a choice between that and lockup. A (barely) reformed art forger, he’s got the expertise to lead Olivia through a dangerous manhunt. But the crime may have a more personal connection to him—and the all-too-real feelings he’s developing toward Olivia could pull her into the line of fire too . . .

“Hauf delivers excitement, danger, and romance in a way only she can!” —#1 New York Times bestselling author Sherrilyn Kenyon

Ethan Maxwell slowly rolled off the woman he’d tackled to the floor. He felt awful for shoving her onto the hardwood floor, but if she’d been standing upright, the charge that had been hidden behind the painting would have blown up in her face. The explosion had sounded like a gunshot. And the room smelled of smoke and some chemical he couldn’t name. His expertise was not munitions.

Ethan knelt and looked around, gathering his equilibrium and taking stock of the room. He noticed a man to his right wearing white forensics scrubs and holding out his hands as if in shock.

“Yes, that was a bomb,” he said sarcastically. Sometimes cutting remarks escaped Ethan’s mouth before his brain caught up with him.

“He’s deaf,” the woman said as she rolled over. She caught the man in white’s attention and signed something to him.

The man nodded and stepped back.

Ethan stood up, tugged down the sleeves of his navy wool blazer, and offered his hand to the woman. She slapped her hand into his and he helped her up. Upright, she smoothed the skirt of her dress and fluffed her red hair. Ethan noticed that her black dress, patterned with wide, bright red roses, clung to ample curves.

The redhead signed to the forensics man, and he stepped back over to the bench, where Ethan noted a camera, dusting brushes, and plastic evidence bags—standard tools of the forensic trade.

“A bomb?” she said wonderingly as she studied the destroyed painting. “I don’t understand.”

The frame was still intact. The charge had only been strong enough to blow away the center of the canvas—both canvases, Ethan presumed—leaving about eight inches of the outer edges frayed and hanging.

“Yes, a bomb,” Ethan reiterated. “So sorry to have mussed your pretty dress, ma’am. It’s a lovely bit of flowers on you, though.” He winked as he unbuttoned his coat and pointed to the gallery entrance. “Could you please direct me to the investigating officer? I’d like to clear the room of all unnecessary personnel. And a call must be put in to the bomb squad, Miss, uh…”

She offered her hand. “I’m Constable Olivia Lawson, with Scotland Yard’s Arts and Antiquities Unit. And you are?”

“Oh!” Quite taken aback by her introduction, Ethan slid his hand from her grip. His eyes fell to her cleavage, which wasn’t blatant, but there was so much bosom pushed up amidst the red roses, it proved impossible not to notice. Over and over. Then he realized he was staring and blurted out, “You don’t look very much like a constable.”

“And exactly what do you expect a constable to look like?” She sounded annoyed, sliding a hand to her hip.

Ethan had never been a man to bite his tongue. “Perhaps a bit less… lush.” 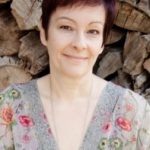 Michele Hauf has been writing romance, action-adventure and fantasy stories for over twenty years. Her first published novel was Dark Rapture (Zebra). France, musketeers, vampires and faeries populate her stories. And if she followed the adage “write what you know,” all her stories would have snow in them. Fortunately, she steps beyond her comfort zone and writes about countries she has never visited and of creatures she has never seen.