SNEAK PEEK: Lord of the Seas by Sabrina Jarema 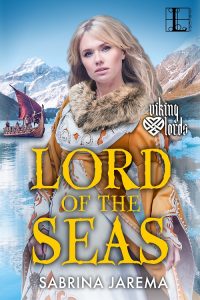 All Things Viking by Sabrina Jarema

In my longtime love of all things Viking I’ve found that once they invade your life, you never quite escape them. This effect can be in everything from the movies you love (Marvel’s Thor) and the décor of your home (Viking longships in the living room) to the names you give your pets.

I’ve bred white German Shepherds for the last three decades or so, but lately I decided that I’m getting too old for this sort of thing and that I’d let another breeder do the dirty work. I would buy a puppy from my own bloodline when one became available. Several years back, I sold a female to Vantasia White German Shepherds and when she was ready to have pups a couple of months ago, I requested one. They were great at sending me photos of all the girls every week. Soon I picked out the one I wanted. She just stood out to me and by the time she was a month old, I had fallen madly in love.

I didn’t want to name her until I got to know her. At two months old, she came home with me. I had made out a list of names of the Norse goddesses and Valkyries, but an author friend suggested the name Valkyrie itself. The name Freya was also in the running.

Freya was the goddess of sex and war, an odd combination. Many ancient Scandinavians married on Friday, Freya’s day, in honor of her. The Valkyries were goddesses who flew above the battlefield, picking out which warriors deserved to go to Valhalla and Folkvang after they died. They also served the gods in Asgard, which sounds subservient, but it was considered a great honor. Norse women, wanting to emulate the Valkyries, even fought over which of them would have the right to serve the high-ranking men. The shieldmaiden Kaia does this in Lord of the Seas, the third book in my Viking Lord series.

I tried out the name Freya on the puppy for a day and she ignored me. But when I called her Kyrie, short for Valkyrie, she came right away. So she chose her own name: Vantasia’s Ivory Valkyrie. It certainly fits her—bold, fearless and beautiful. She’s already conquering everyone wherever she goes, just like the Vikings who believed in her namesakes. I know she’s certainly conquered me.

Lord of the Seas by Sabrina Jarema

The Vikings roamed and raided the known world, always returning to their beautiful, sacred realm. Now, a young Christian woman is forced into this land—by a Viking lord with a secret he dares not reveal . . .

From Istanbul to Ireland, Rorik of Vargfjell is legendary for the battles he has fought, the wealth he has amassed, and the women he has loved. So when a Northumbrian Earl refuses to pay tribute, and even burns one of Rorik’s ships, the Viking seizes the earl’s daughter—and will hold her for ransom. Or so was his plan.

At home in Northumbria, Elfwynn had experienced agonizing losses—including the peaceful world she was born into. Now she stands face to face with a towering, chiseled Viking in his wondrous kingdom. With her gift of music, her unworldly beauty and strange courage, Elfwynn will prove to be very different than any woman Rorik has known. And for a man who lords over sea and land, what she demands will be the greatest challenge of all . . .
Buy links
Amazon: https://www.amazon.com/Lord-Seas-Sabrina-Jarema/dp/1601838859/
Apple: http://itunes.apple.com/us/book/isbn9781601838827?uo=8
B&N: http://www.barnesandnoble.com/s/9781601838827
Google: https://play.google.com/store/search?q=9781601838827&c=books
Kobo: http://www.kobobooks.com/search/search.html?q=9781601838827
Kensington: http://www.kensingtonbooks.com/book.aspx/34981 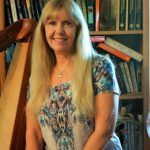 Sabrina lives near Ocala, Florida, the Horse Capital of the World. She has a herd of fat, lazy Arabians on forty beautiful acres. She also shows White German Shepherds and currently has several Grand Victrixes taking over her house. Tortoises, turtles, fish and cats round out the menagerie. To avoid farm work as much as possible, she loses herself in the worlds she creates through the novels she writes, her art, music, dollhouses and jewelry. She is currently writing the Viking Lords series, a family saga set in Norway during the ninth century. She is an active member of the Tampa Area Romance Authors chapter of the Romance Writers of America. Please visit her websites and Facebook page to enjoy her art, music, writing and all the visions the night brings to her.
Author Links
Website: www.authorsabrinajarema.com, www.sabrinajarema.com,
Facebook: www.facebook.com/sabrinajarema1