An Interview with Tara Sheets Author of DON’T CALL ME CUPCAKE: The Holloway Girls #1 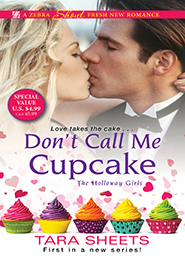 DON’T CALL ME CUPCAKE: The Holloway Girls #1 by Tara Sheets

I’m so happy we get the chance to chat today. First, I wanted to congratulate you on your Golden Heart win and subsequent sale of the book. So exciting! From a fellow Kensington author, welcome to the fam!

Thank you so much! I am thrilled that Don’t Call Me Cupcake found a home with the Kensington family. This book is very close to my heart, and I can’t believe I’m finally at the point where I’ll be able to share it with readers.

Q: I immediately fell in love with The Holloway Girls in your first release in that series, Don’t Call Me Cupcake. I also fell in love with Pine Cove Island. Tell us about how you came to pick Washington state for the location. Any fun research stories to tell?

I lived in Washington state for almost twenty years, and there’s a group of islands off the Pacific Northwest coast called the San Juan Islands. My family and I spent many summers on Friday Harbor, which is the inspiration behind Pine Cove Island. I remember visiting and thinking how the waterfront town, the tourist shops, and the gorgeous ocean views seemed a little bit magical and romantic. Plus, there were many sweet shops selling cupcakes, ice cream, and all sorts of delicious treats. That’s when I began dreaming up the story of the Holloway girls.

Q: Cupcakes! Aren’t they just addictive? I spent a year consumed by all things cupcakes while researching my Cupcake Club books. You’d think I’d be so over them, but no ma’am. Your book was an instant-buy on the title alone. What drew you to writing about baking and cupcakes?

I’ve never been very interested in cooking, but I definitely love to bake. My parents owned a small coffee shop, and my sister and I used to take turns trying out new cupcake and cookie recipes in the kitchen. My grandmother also owned a similar shop in Hawaii, so I think the idea of magical cupcakes evolved from those experiences. And I do have a sweet tooth, so let’s just say, many cupcakes were “tested” during the writing of this book. Research is so important, you know!

Q: If the title hadn’t already hooked me, when I discovered that your heroine, Emma Holloway, bakes wishes into the cupcakes? I love that SO, so much! I also love the name Fairy Cakes for Emma’s bakery. Where did your “little something extra” idea come from?

I’ve always loved fairy tales. There’s something whimsical and fun about sprinkling a little bit of magic into a story. When I thought of Emma and her baking, the magical talent was always a part of that from the very beginning. I knew that I wanted these Holloway women to each have a special ability that helped people. I chose the name Fairy Cakes not just because it refers to cupcakes, but also because it gives a nod to fairy tales and Emma’s past.

Q: Tell us a little about Hunter Kane and the trouble he has in store for Emma. She’s so flustered when she meets him she sells him three of her magical Sweet Success cupcakes. Oh boy!

Yes, the deliciously handsome Hunter Kane visits Emma’s shop and she thinks he’s just a passing tourist. When he mentions he’s there on business, she gives him magical cupcakes to bring him success. Later she finds out that his “business” is the fancy new restaurant and bakery opening up right next to her shop. Emma is furious. The hot guy who charmed her is the new rival who’s going to take away all her profits? Not acceptable! She turns to her cousin Juliette and together they scheme to make him leave town forever. Magic and mayhem ensue . . .

Q: Like Hunter and Emma, I love it when the hero and heroine go from adversaries to a forever-kind-of-love. So much tension! And when a lot of it is sexual? Even better! Is this a favorite of yours as a reader? What other themes might be in store for us? (Childhood friend to lover is another fave of mine. Hint, hint!)

I definitely enjoy reading stories where the characters go from enemies to lovers. That slow-burn kind of romantic tension is the best kind. It makes the final moment where they realize their feelings for each other so much more satisfying. Plus, it’s just so much fun watching them trying—and failing—to resist each other! As for stories where the hero and heroine go from childhood friends to lovers, that’s another one of my favorites. It sparked the idea for the second book in the series.

Q: Okay, okay, so I have to stop talking about Emma’s Fairy Cakes cupcakes and Hunter’s everything hotness for just a moment (wah!) You have such a fascinating story yourself, I want to hear more about that. You were born on Guam and your family is Chamorro. Tell us a little about your cultural background and if that has influenced you in your writing in any way.

I am Chamorro, born on Guam and raised overseas. My family traveled a lot and I grew up in different countries including Dubai and Cairo, Egypt. Even though we had such different experiences, I still feel very connected to my island life. A lot of my family is now in Hawaii. I think it just made sense for me to base my first series on an island, because I’m familiar with that small-town atmosphere and lifestyle. In a way, my fictional town of Pine Cove Island melds that with what I’ve learned about living in the Pacific Northwest. I also created Emma’s mother’s character using my experience of what it was like to move from place to place growing up.

Q: I hear your great-grandfather has a bronze statue in his honor on Guam. How awesome is that? And it has something to do with ice? You definitely need to tell us all about that!

My great-grandfather, Pedro Pangelinan Martinez, was responsible for bringing the first ice plant to Guam in 1921. It was a huge step forward for the Guamanian people because the factory supplied ice to the hospital, schools, residents, military, and government offices. He also began a construction company that built the pre-war structure for the St. Vincent de Paul Society, whose mission is to help the poor. Pope Pius XII gave him the title “Pro Ecclesia et Pontifice”, and he was made a Knight Commander of the Order of Saint Sylvester by Pope John XXIII. He also received a similar award from Pope Paul VI. Several years after he died, the people of Guam erected a bronze statue of him and dedicated a place called Pedro’s Plaza in his name.

Q: I understand you just made a big cross-country move. That sounds both exhausting and exciting! How are you adapting to the big change? What do you miss from your old neighborhood and love about your new one?

My family and I recently moved from Seattle, WA to North Carolina. It has definitely been a big change, but I’m loving the gorgeous weather. It’s fabulous to be able to walk outside in early spring and not need a coat. I’m also truly charmed by the genuinely kind and friendly people I’ve met here. Sometimes we miss the mountains and the ocean views of the Puget Sound, and we do miss our old friends, but I’ll say this: I do not miss the rain! People told me I’d eventually miss the rain and that hasn’t happened yet. So far, so good.

Q: Back to The Holloway Girls and those magical cupcakes. (You can’t keep me away for long.) I love a little magic in my romance! What do we have to look forward to next in this series? Which Holloway Girl is in the spotlight? When is the book coming out? And can I have the first copy? (So many questions!!)

I would be honored to give you the first copy! The second book in the series is called Don’t Touch My Petunia. It’s about Juliette Holloway and her garden magic. In Juliette’s story, she and her childhood crush, Logan O’Connor, meet again for the first time in over a decade. Since they did not part on good terms, Juliette is determined to ignore him because she’s completely and totally over him. Except, of course, she’s not. As much as she wants to pretend there’s nothing between them, Logan knows better . . . and he’s determined to show her. Don’t Touch My Petunia comes out in September 2018.

Q: What else is on the horizon for you? Where can we find you on social media? You know, so we can pester you to hurry up with the next installment? Asking for a friend. 

Thank you so much for taking the time to talk about Don’t Call Me Cupcake and The Holloway Girls series! I am thrilled to bits that you loved Emma and Hunter’s story. If you’d like to connect with me on social media, please visit my website at tarasheets.com and subscribe to my newsletter so you can stay up to date on fun events and the latest news. You’ll also find links to Twitter, Facebook, Instagram, BookBub, and Pinterest (where I’ve created photo collages for each book in the series—so much fun!)

Thanks so much for taking time out from unpacking and writing and baking and researching to chat today. Now, hurry up and get back to it. I need more Holloway Girls in my life!