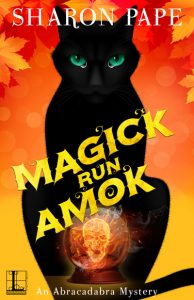 I set out to write a paranormal cozy mystery about the Wildes, a family of sorcerers living in rural Upstate New York. Their ancestors arrived here from England in the seventeenth century and built a magick shop that is still standing when the story opens

I wanted to anchor their story with a character who was firmly planted in the American psyche. Someone legendary like the fabled wizard, Merlin.This was going to take some research. I dove right in and when I resurfaced, I’d found some interesting material.

According to some accounts, Merlin may have lived as far back as the sixth century, at the time of the Druids, while other stories have him living during medieval times when the legendary King Arthur ruled the fantastic realm known as Camelot. Or was it King Uther? Or was Uther Arthur’s father? Or was Uther just an ancient form of Arthur? More to the point, Merlin appears in most of these ancient tales, although he’s described differently and has different supernatural powers ascribed to him, depending on the writer.

When you consider the many conflicting stories about Merlin, it seems likely that he may have represented a number of different people, both real and legendary. I could definitely work with that. Add to that the fact that most Americans know about Merlin from novels like the wonderful trilogy by Mary Stewart, or from Camelot, the Broadway musical and movie, or from any number of television shows. Rare is the reader who has never heard the wizard’s name. Merlin would be a perfect anchor for my story.

Another aspect of his legend explained how he came by his supernatural abilities. He was said to be the offspring of a human mother and a supernatural father known as an incubus. In other words, magick was an intrinsic part of Merlin. It was in his DNA. Any children he had would carry that magickal DNA and pass it on to future generations. If the Wildes could trace their bloodline back to him, it would explain why their magick makes them so special, a breed apart from common magicians who practice sleight of hand on a stage or at a child’s birthday party.

Once I’d settled on Merlin, I had to decide at what stage of life he would join my cast of characters. Did I want him to be young and brazen? Middle-aged and wise? Or perhaps elderly and suffering from some memory issues? It was no contest. The prospect of an elderly Merlin, plucked from Medieval times and deposited in the twenty-first century made me grin. Everyday conveniences we take for granted are mind-blowing to him: indoor bathrooms, machines to wash and dry clothes and dishes, TVs, movies, cell phones and computers, cars and jets and rockets to the moon! What could possibly go wrong as Merlin tries to adjust to his new world?

Let’s not forget about the food. Although Merlin ate well at King Arthur’s table, he probably never had pizza or ice cream or a host of other exotic dishes. And although he may have eaten pastries back then, they couldn’t compare to the assortment of baked goods that Kailyn’s aunt Tilly sets out for the high teas she serves after her psychic readings. Yes, the stage was all set for my Abracadabra Mysteries!

You can purchase MAGICK RUN AMOK  at:
Kensington Books

I started writing stories as soon as I learned how to put letters together to form words. From that day forward, writing has been a part of my life whether it was my first attempt at a novel in seventh grade or the little plays I wrote for my friends to perform for neighbors and family. After college, when I was busy teaching French and Spanish to high school students, I was also writing poetry — some of it in French.

After several years, I left teaching to be a full time mom, and when my two children started school, I went back to writing. To my delight I found that the muse was still there, still waiting patiently for me to come around. My first novel, Ghostfire, was published at that time. It went on to be condensed in Redbook magazine (the first paperback original the magazine had ever condensed.) Then came The God Children and The Portal. Redbook also published my first short story, which was subsequently sold to several foreign magazines. With two great kids, a golden retriever and a loving, supportive husband (whom I’d met at the beach when I was fourteen — but that’s a story for another day), I felt like I was exactly where I was meant to be in my life. But fate had another plan for me, and it went by the name of “breast cancer.”

Looking back, I realize how fortunate I was that the cancer was discovered at such an early stage, but at the time it was all very overwhelming. Once I was back on my feet, I wanted to help other women who were newly diagnosed, worried and afraid. I became a Reach to Recovery volunteer for the American Cancer Society and went on to run the program for Nassau and Suffolk Counties on Long Island. A number of years later, with the help of my surgical oncologist and two other volunteers, I started Lean On Me, a nonprofit organization that provides peer support and information to breast cancer patients. When Lean On Me celebrated its tenth anniversary it no longer required as much of my time, and I once again found myself free to pursue my first love — writing.