New Romance and Mystery Books for Your Summer Reading 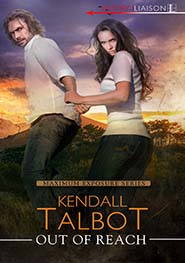 Out Of Reach: Maximum Exposure #1 by Kendall Talbot

In a place where a city can be lost hundreds of years . . . they can still find each other.

Lily saw the temple of Agulinta on television: a vast stone structure swallowed by the Yucatan jungle, rediscovered only now after hundreds of years. So why did the papers she found after her father’s death show the same mysterious carvings that puzzled archaeologists at Agulinta? Her search for answers pulls her to Mexico’s southern border, where the journey to the lost temple will take her through jungle and mountain, over waters home to crocodiles and drug runners, and into uncomfortably close quarters with a man whose need to wander has become a way of life . . .

Australian Carter Logan’s work as a nature photographer has given him the excuse he needs to roam wherever his restless feet take him. But in all the time he’s traveled, he’s never been drawn to anyone the way he is to this determined, cagey young American. Lily’s perseverance through dirt, sweat, and danger to the heart of the ancient temple fires through him. But when the two of them are left alone and stranded in a vicious wilderness, their connection might prove the difference between life and death . . . if the secrets of the past don’t come between them first. 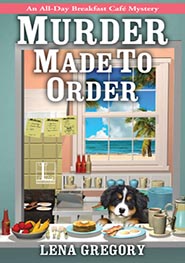 Murder Made To Order: All-Day Breakfast Cafe Mystery #2 by Lena Gregory
To save her cozy Florida diner, Gia Morelli must choke down a heaping helping of murder . . .

New York native Gia Morelli is just getting used to life in Florida when she gets word that the town government wants to shut down her pride and joy: the charming little diner known as the All-Day Breakfast Café. A forgotten zoning regulation means that the café was opened illegally, and hardboiled council president Marcia Steers refuses to budge. Gia is considering hanging up her apron and going back to New York, but before she gives up on her dream, she discovers something shocking in the local swamp: Marcia Steers, dead in the water. There’s a secret buried in the books at town hall, and someone killed to keep it hidden. To save her café and bring a killer to justice, Gia and her friends will have to figure out a killer’s recipe for murder . . . 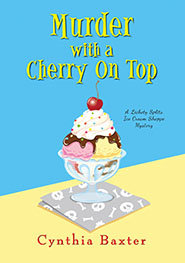 Murder With A Cherry On Top: A Lickety Splits Ice Cream Shoppe Mystery by Cynthia Baxter

Kate McKay had doubts about swapping her high-powered life in Manhattan for Wolfert’s Roost, the quaint Hudson Valley village where she grew up. But when she moves back to care for her ailing grandmother, Kate decides to start fresh and indulge her dream of running an ice cream shop. All goes smoothly—until she’s reunited with old acquaintances nuttier than a vat of rocky road . . .

Kate should be thrilled about opening Lickety Splits Ice Cream Shoppe in the heart of town. Instead her spirits melt like soft serve in the summer when she learns that her childhood frenemy, Ashley Winthrop, has started selling frozen treats in the bakery across the street. Turns out, Ashley hasn’t sweetened since high school. And, once again, she’s game for some very unfriendly competition . . .

But before Ashley can kill Kate’s new business, someone kills Ashley—stabbing her to death inside the bakery. Worse, the murder occurs right after the two rivals drew crowds with a heated argument, leaving half of Wolfert’s Roost speculating that Kate was finally pushed over the edge . . .

With rumors swirling and her reputation in serious trouble, Kate is determined to get the real scoop on the crime—even if it means joining forces with a former flame. As she pieces together clues to a chilling scandal, Kate soon realizes that she’ll need way more than a sprinkle of wit if she wants to expose the killer and live to see another sundae . . . 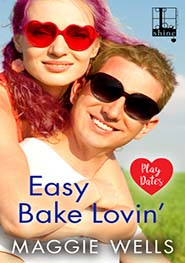 Easy Bake Lovin’: Play Dates #2 by Maggie Wells
A straight-laced single dad just may discover he has a sweet tooth . . .

Mike Simmons had it all—until his perfect wife turned his perfectly ordered life upside down by leaving him and their two children. Now Mike’s struggling with the chaos of juggling his career as a security consultant with being a divorced single dad. It’s no surprise he’s not entirely comfortable with the anatomically correct treats their new client, Getta Piece Bakery, offers. And he doesn’t mind letting the client know it.

Free-spirited and spunky, baker extraordinaire Georgie Walters is about as far from a soccer mom type as you can get. She owes a lot of her success to the bachelorettes who have a special appreciation for her creations. But as Mike stands in her tiny shop nervous, but clearly intrigued, Georgie has to admit the guy is beautiful when he’s wound up tight. In fact, she finds she can’t resist getting a rise out of him. When she hires him to take care of her security needs—she gets so much more in the bargain. Now, her challenge is to teach him to look beyond the candy coating to all the warmth she has inside . . .