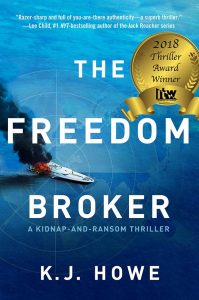 There are twenty-five elite kidnap negotiators in the world. Only one is a woman. And she’s the best in the business.

Meet Thea Paris in THE FREEDOM BROKER. With over 40,000 reported kidnappings every year—which translates to five people every hour— the world of kidnap and ransom is taking on a newsworthy role across the globe. Displaced military and police in third world countries have no way to put food on the table, but they do have security skills, so they have turned to kidnapping as a way of making a living. Also, terrorists are using kidnapping as a fundraising enterprise, filling their coffers with over 125 million dollars since 2009. Kidnappers used to only abduct high net-worth individuals and executives of multi-national organizations. Not anymore. Journalists, aid workers, and family members of executives have now become high value targets.

Kidnapping is a growing international crisis. What tools do we have to fight against this increasing threat? There are twenty-five elite kidnap negotiators who travel to the globe’s hotspots to bring hostages home, through negotiation or recovery, and they are called response consultants or freedom brokers. Local to Toronto, author K.J. Howe has immersed herself in the world of kidnapping for the last three years, interviewing kidnap negotiators, former hostages, kidnap and ransom insurance executives, hostage reintegration experts, psychiatrists specializing in the captive’s mindset, and the Special Forces soldiers who deliver ransoms and execute rescues.

Howe’s research culminates into her debut thriller, THE FREEDOM BROKER, published by the Hachette Book Group under the Quercus imprint in the US, Canada, U.K. and many foreign territories. The book has reached attention North America wide, and has led to reviewers such as #1 NYT Bestseller James Patterson calling it “fact and fiction at its best.”

In The Providence Journal, USA Today Bestselling author Jon Land reviews, “The Freedom Broker is a blisteringly original, superbly crafted thriller that promises to be one of the major debuts of 2017. K.J. Howe’s gut-wrenching foray into the world of hostage negotiation turned upside down propels her straight into the league of Linda Fairstein, Tess Gerritsen, Lisa Scottoline, and Karin Slaughter, thanks to a tale framed by an emotional complexity and structural elegance both rare for the genre. As riveting as it is bracing, this is reading entertainment at its absolute best.”

You can purchase THE FREEDOM BROKER at:
Amazon

About the Author:
Born in Toronto, Canada, K.J. enjoyed a nomadic lifestyle during her early years, living in Africa, the Middle East, Europe, and the Caribbean, which gave her an insider’s view into many different cultures. While abroad, she read every book she could find, which triggered in her a desire to create her own stories.

She attended Salzburg International Preparatory School, Neuchâtel Junior College, and Albert College before earning a Specialists Degree in Business from the University of Toronto. K.J. found success in the corporate world, but her passion for travel, adventure, and stories drew her back to school where she earned a Masters in Writing Popular Fiction from Seton Hill University.

She also won several writing awards, including three Daphne du Maurier Awards for Excellence in Mystery and Suspense. While honing her fiction skills, K.J. worked as a medical, health, and fitness writer. She then became involved with the International Thriller Writers as the executive director of ThrillerFest, the organization’s annual conference held every July in New York City.

K.J. is an avid tennis player, cyclist, and swimmer. Travel and adventure still rank high on her priority list. She has had the pleasure of riding racing camels in Jordan, surfing in Hawaii, zip lining in the Costa Rican jungle, diving alongside Great White Sharks in South Africa, studying modern combat in the Arizona desert, and working with elephants in Botswana. Home is in Toronto, Canada, but she is often missing in action.

K.J. Howe is available for interviews and appearances along with presentations about kidnapping and travel safety. For media appearances, interviews, speaking engagements, and/or book review requests please contact mickey.creativeedge@gmail.com by email or by phone at 403.464.6925.