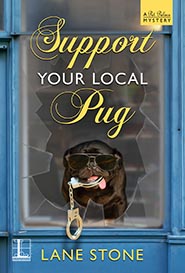 Buckingham Pet Palace may provide services fit for a four-legged king, but there’s no use crying over spilled kibble—not unless it leads to murder!

When a break-in at the Pet Palace robs Sue Patrick of more than her beauty sleep, she intends to tidy her ransacked doggy daycare and spa before making any rash decisions. But after Sue abandons her better instincts to rescue a petrified pug stranded at a lighthouse in the Delaware Bay later that morning, she’s lured off mainland Lewes long enough for a freshly murdered body to get dumped in her driveway . . .

Aided by Lady Anthea Fitzwalter, her practically royal business partner from across the pond, Sue sniffs out clues about the yappy pug with a complicated history and the old car spotted at both crime scenes in hopes of IDing the culprit. As the investigation leads them back to the bay, the ladies soon find themselves immersed in a case trickier than a canine agility course—and chasing after a well-groomed killer who will do anything to maintain a perfect reputation . . .

You can purchase Support Your Local Pug at:
Kensington Books 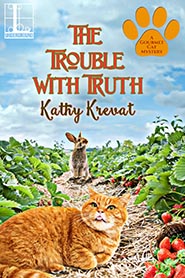 The Trouble With Truth: A Gourmet Cat Mystery #2 Kathy Krevat

Things are looking up for single mom Colbie Summers. After relocating back to her California hometown with her adolescent son and taste-testing feline, Trouble, she’s ready to take her gourmet cat food company to the next level. Until helping a teenager gets Colbie mixed up in a fresh case of murder…

Trying to balance her hectic family life with her growing business—including a coveted contract with the local organic food store—leaves Colbie scrambling to keep all her balls in the air. But when a Sunnyside resident is found dead in his garage, she takes on a new role: harboring a suspected killer.

The eighteen-year-old murder suspect, a former foster kid and Colbie’s part-time chef, had a powerful motive to snuff out the high-profile businessman. The real question is, who didn’t? Sifting through the victim’s sordid history unearths a cat’s cradle of crimes, including money laundering and abuse. Now, to clear an innocent girl’s name, Colbie must sniff out the truth before a killer who smells trouble goes on the attack again.

You can purchase The Trouble With Truth at:
Kensington Books 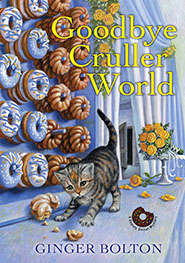 Named after her beloved tabby, Deputy Donut, Emily Westhill’s donut shop in small-town Fallingbrook, Wisconsin, is doing so well, she’s expanding into catering weddings. But a killer is about to crash the reception . . .

Normally, Emily’s eyes tend to glaze over when prospective brides go on about their wedding plans. But when the owner of the clothing shop, Dressed to Kill, asks Emily to design a donut wall for her reception, she’s immediately sweet on the idea. With the help of her father-in-law and business partner—the former police chief of Fallingbrook—she hangs the treats from dowels on the wall so guests can help themselves.

You can purchase Goodbye Cruller World at:
Kensington Books 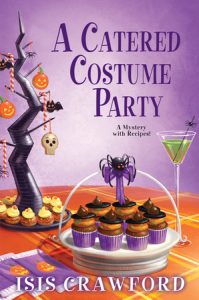 A Catered Costume Party: A Mystery With Recipes Isis Crawford

When sisters Bernie and Libby Simmons agree to cater an extravagant Halloween party in their little upstate New York town of Longely, they figured a ghost or two and a blood curdling scream might be part of the menu, but they never expected to be haunted by the deadly specter of murder . . .

Halloween is coming, and Darius Witherspoon isn’t giving up on his plan for a catered costume party—despite the recent disappearance of his wife, Penelope. He may be heartbroken, but perhaps throwing a big shindig in her honor will boost his spirits. He’s going to hold it at his stylish new co-op apartment at the Berkshire Arms, where the couple had dreamed of moving in.

Darius hires Bernie and Libby to provide the treats. They’d prefer to avoid the festivities altogether. As far as they’re concerned, the Berkshire Arms is a haunted house—or at least haunted by the memory of the murder that happened on the site, when it used to be The Peabody School. But as always, there are bills to be paid, so they accept the job. And in the midst of the celebration, Darius is discovered hanging from a noose outside one of the ballroom’s French doors . . .

Was it suicide, induced by despair over his missing spouse? Bernie and Libby think not, once they read the note he left—which includes a sum of money and a request for them to “do something” if anything should happen to him. Now, once the serving trays have been cleared and the decorations taken down, it’s time for the sisters to unmask a killer . . .

Includes Original Recipes for You to Try!

Delicious Praise For Isis Crawford And Her Mouth-Watering Mysteries!

You can purchase a Catered Costume Party at:
Kensington Books