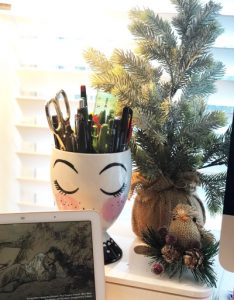 Christmas at HildieLand by Hildie McQueen

I am one of those people that loves holiday celebration and parties.  Every year, hubby and I host the annual Griswald Christmas party where the theme is National Lampoon Christmas and everyone has to dress as one of the characters.  I adore turning on the holiday tunes, making spiced wine, cheese trays and entertaining.

You’d think I’d want the house to look like a winter wonderland explosion when my guests arrive, but although I do want that, I rarely make the time to be prepared enough to decorate in advance.  Most years, I just throw up a tree and maybe hang up a holiday towel in the guest bathroom.  Or more accurately I should say, my husband puts up the tree while I drink a glass of wine and whine about all the work it takes.

Once the tree is up, it feels lonely, so I decorate the fireplace and the entryway by putting up some sprigs with holly berries and pinecones.  Then if I’m feeling extra spunky, I put a couple little tree decorations on the kitchen counter and guest bathroom.

This year, I’ve decided to embrace the holidays and decorate my house early.  I am going with a rustic French country theme so that I don’t have to put away most of my mostly off-white items and instead add a holiday flair.  I’m excited!

My first attempt was in my office.  The room is a gray and white theme, with silly mostly pink, whimsical items 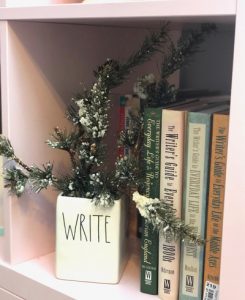 strewn throughout.  I climbed up into my attic to see what I had and found some items from an old office Christmas party.  I added the little rustic items throughout the room and it turned out amazing!! My desk makes me happy and I am feeling festive already.

So now I will be on a quest to find more items like these to put throughout the living room, entryway and well all those other places I mentioned above.  My tree however will be Scottish themed like the last couple of years, because, let’s face it, my enthusiasm will run out after I shop for rustic decorations for the other places.

I am not going to be writing a lot this December, because I want to take time to enjoy the season.  I like to give myself time to read.  I normally am pulled into a Regency or Georgian romance that has a holiday theme.  And so, while my husband watches Hallmark movies and tries to force me to, I rebel by holding up my kindle to block the darn things. 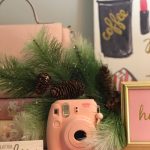 I considered writing a Christmas book this year, so I wrote The Appeal of an Elusive Viscount, about a handsome viscount to goes to London for the season in hopes of finding a wife.  The story will be filled with balls and entertaining that took place during those times.  However, I skirted over the holiday portion and instead focused on the entire season and the weather during one of the most romantic periods in English history.  I hope that when you read it, the allure of the holidays will come through.  The story was so much fun to write that I’m giddy with excitement over writing the sequel, which will be released in early 2019.

Happy Christmas everyone, sprinkle kindness wherever you go! 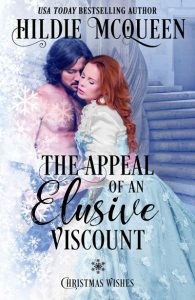 The Appeal of an Elusive Viscount

Viscount William Torrington bends to his family’s wishes and agrees to spend the Christmas season in London society.  Once he finds a woman to sire his children, he plans to marry her, get her with child and return to his country estate, alone. When William meets a young woman, who’s snuck into a gentleman’s club, she piques his interest enough to consider her as a possible wife.  However, he wishes for a meek wife and she seems anything but.

After kissing a dark stranger in exchange for his silence, Clara Humphries tries her best to push the incident out of her mind.  Her one wish for Christmas is for her sweet sister to find a good husband. Upon hearing a very eligible viscount is in London for the season, Clara decides that he would be a great match for her sister.  Her plans go awry when it turns out to be the same person she kissed.

The appeal of the viscount is impossible to ignore, however Clara vows to fight becoming an abandoned wife.  At the same time, William is having second thoughts about his solitary life plan.

The Appeal of an Elusive Viscount is a wonderful blend of happenstance, sensuality and humor. 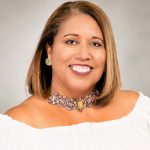 USA Today bestselling author Hildie McQueen was raised watching Bonanza, Gunsmoke and Little House on the Prairie so its only logical that she writes mostly American western historical romance.

Hildie often ends up in unusual and interesting situations, which is often conveyed in her characters’ adventures.

Author of Highlander, Georgian and Western historical romance as well as a few contemporaries, Hildie writes something every reader will enjoy.

Most days Hildie McQueen can be found in her overly tight leggings and green hoodie, tapping away at a keyboard with a cup of Earl Grey tea at her elbow.  When taking a break, she tiptoes to the window to spy on the landscaper.