75th Anniversary of the Birth of the Atomic Age

The atomic age was born 75 years ago. Commemorate these important anniversaries with an expert interview subject:

Bestselling author Robert J. Sawyer’s new book The Oppenheimer Alternative will be published Tuesday, June 2, 2020, in paper, ebook, and audiobook worldwide, specifically to coincide with the above anniversaries.

Perimeter Institute physicist Lee Smolin, the author of The Trouble with Physics, says, “I know the history of this period well and I’m one or two degrees of separation from many of these people. Sawyer’s portrayals ring true to me.”

Gregory Benford, physicist at UC Irvine, agrees: “The feel and detail of the Manhattan Project figures is deep and well done. I knew many of these physicists, and Sawyer nails them accurately.”

Based on the latest research and recently declassified documents, Sawyer will enthrall your audience with stunning revelations about the dawn of the atomic age.

DID YOU KNOW THAT:

“Incredibly realistic: the characters, locations, the era, and  the science. I felt like I was back in Los Alamos — and I should know: I worked there! Breathlessly riveting; Sawyer pulls it off masterfully.” —Doug Beason, former Associate Laboratory Director, Los Alamos National Laboratory

“Sawyer portrays brilliantly and poignantly the struggles of the scientists who started it all and were consequently obliged to bear an unbearable burden.” —James Christie, Chair, Project Ploughshares, member organization of the Nobel Peace Prize-winning International Campaign to Abolish Nuclear Weapons

Robert J. Sawyer is a member of the Order of Canada, the highest honor given by the Canadian government, and is past president of the Science Fiction and Fantasy Writers of America.  The Toronto Star calls him “Canada’s answer to Michael Crichton” and The New York Times says he’s a writer of “boundless confidence and bold scientific extrapolation.” The Oppenheimer Alternative, coming June 2, is his 24th novel.

I have to explain about Oppie: about every five years, he would have a personality crisis; he would change his personality. I mean, when I knew him at Berkeley, he was the romantic, radical bohemian sort of person, a thorough scholar … —Robert R. Wilson, American physicist

“You’re bad luck for me,” said Haakon Chevalier. “I hope you know that.”

Robert Oppenheimer looked at his friend, seated next to him on the pink-and-green living-room couch as the party bustled about them. Oppie’s sense was the exact opposite: Hoke had brought him nothing but good fortune, including getting him into this offbeat rooming house here on Shasta Road. “Oh?”

“Absolutely. When I go places without you, I’m considered the attractive one.”

Oppenheimer made a small chuckle. Chevalier, who had just turned thirty-five, was three years his senior, and was indeed movie-star handsome: gallant, as befitted his last name, and long of face, with wide-spaced eyes and sandy hair swept back in a slight pompadour.

By comparison, Oppie knew he himself was scrawny, his tall body angular, his coarse black hair a wild nimbus, and his duck-footed gait awkward — one friend had described it as a constant falling forward as if he were forever tumbling into the future.

“See that one over there?” continued Hoke, with a subtle nod. “She hasn’t glanced at me once since we got here, but you —” Chevalier shook his head in good-natured exasperation. “It’s those goddamn eyes of yours, I tell you. Fucking opals.”

Oppie was used to compliments about his pale blue eyes: he often heard them called “transparent” or “luminous,” but this metaphor was new to him. He smiled as he turned to look at the woman Hoke had indicated, and —

And, my God, he’d seen that lovely face before — he was sure of it. But where? “Wow,” said Oppie softly.

“Wow, indeed,” agreed Hoke. “And she keeps looking your way. You should go over and say hello.”

“Oh, for Pete’s sake, Robert, go! You study the mysteries of the universe; girls are simple by comparison.”

Hoke taught French literature at the University of California’s Berkeley campus; Oppie was a professor of physics there. Normally, members of such diverse faculties would have little to do with each other, but Oppie loved French poetry, and the two men had become great friends. One advantage Hoke had was a lot of female students — he’d married one, in fact — whereas in Robert’s circles, women were rare. “Come on,” said Hoke. “Give me a story to tell Barb when I get home. Go try your luck.”

Luck. Einstein said that God didn’t play dice with the universe — but, then again, God probably wasn’t itching to get laid. “All right already,” Oppie said, unfolding himself from the couch. Of course, he couldn’t just go up and say hello, but Mary Ellen, his landlady, was swirling by in one of her floor-length batik dresses. She threw many parties, often as fund-raisers. This one was for the Republicans in Spain — or maybe it was for the Spanish Nationalists? Whoever the good guys were, anyway; Oppie had come downstairs from his room for donuts and drinks, not the cause.

“Robert! So good of you to pull your nose out of your books and join us! But your glass is empty. Let me —”

“No, no; I’m fine. But if you could …” He gestured feebly at the busty young woman seated by the fireplace.

“Ah!” said Mary Ellen, her wide face splitting in a grin. “Yes, of course!” She took Oppie’s hand and pulled him across the crowded room. “Jean,” she said, and the woman looked up, “this is my best tenant — oh, hush, Fred; you know I love you, too! This is Robert. He teaches physics. Robert, Jean here is studying to be a doctor.” Mary Ellen managed to make an art-deco chair appear out of nowhere and maneuvered Robert onto it so that he was facing Jean. “Now, let me get you a drink!”

“Yes. A psychiatrist, in particular.” Jean’s voice was warm. She was, as he’d noted from across the room, beautiful — even more so close-up. “I’m fascinated by Freud,” she continued. “Do you know his work?”

Well, well: look at those dice. Six the hard way! “I do indeed. In fact, I know Ernest Jones.”

“Yes. We, ah, met when I was at Cambridge in 1926.” Jones, a great friend of Freud, was the first English-speaking practitioner of psychoanalysis and had become its chief proponent in the English world.

“Tell me — my God, tell me everything about him!”

Mary Ellen fluttered by again, giving Oppie a bourbon and a wink, then went upon her way. “Well,” said Oppie, “he was practicing in Harley Street …” As he spoke, he continued to study her smooth, classically beautiful face and striking green eyes, emeralds to his opals. Jean wore her black hair short and had a slight dimple in her chin. She was probably a decade younger than he was.

They talked for most of an hour, and the conversation slipped easily from topic to topic. He was enthralled by that hauntingly familiar beauty of hers and by her nimble mind and ready wit, and yet she was mercurial. One moment she’d seem animated and boisterous, the next fragile and sad. Still, against a noisy background of someone banging away on the piano, dozens of overlapping conversations, and the clink of glasses, he listened attentively, although at one point he had to hold up his hand to stop her. “My family,” she said, “moved out here from Massachusetts just before the crash, and —”

“You were in an accident?”

She looked at him for a moment, puzzled. “No. The stock-market crash.”

“The stock-market crash of 1929. The beginning of the Great Depression.”

“You don’t know, do you?” Jean looked amazed. “Where have you been?” He wished she’d gone on to add the words all my life, but instead she finished by observing: “Born with a silver spoon in your mouth, were you?”

“Well, I — I mean, my father did all right.” Then he added, as if somehow it explained his ignorance: “He invested, but mostly in art, not stocks.”

She tilted her head again, and the light from the porcelain table lamp hit her just so, and he suddenly realized where he’d seen that face before. Oppie’s favorite book was Baudelaire’s poetry collection Les Fleurs du mal. The shape of Jean’s face and the curve and length of her nose were identical to that of the woman in the etching accompanying Baudelaire’s heartbreaking “Une Martyre” in the glorious 1917 edition. He frowned, ousting the thought. That etching was gruesome: the woman’s head had been severed, a beauty cut down in the flower of youth as her older lover traveled the world.

The evening was ending at last, and Oppie, four drinks in, was ready to ask the young lady out. “And so, Miss …” he began.

“Tatlock,” she said, and the crisp syllables hit him like bullets.

“Are … are you related to John Tatlock?”

“John Tatlock? The medievalist at Berkeley?”

Oh, yes, thought Oppie. John Strong Perry Tatlock was an expert on Geoffrey Chaucer, a towering presence at Berkeley faculty-association meetings, a loud voice often heard booming across the Faculty Club dining hall — and a raging anti-Semite. That wasn’t unusual at Berkeley; when Robert had tried to get his student Bob Serber a job there, the physics chairman had said that having one Jew in his department was quite sufficient. But … damn.

“Ah,” said Oppie, his stomach knotting; he hadn’t mentioned his own last name. He got up from the funky chair. “Well,” he said sadly, “it was nice meeting you.” He made his way toward the staircase that led up to his lonely room. 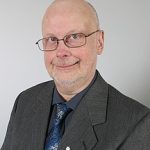 A member of the Order of Canada, he lives in Mississauga, Ontario (just outside Toronto).Rob is one of only eight writers in history — and the only Canadian — to win all three of the world’s top Science Fiction awards for best novel of the year: the Hugo, the Nebula, and the John W. Campbell Memorial Award.

Jocie McKadehttps://www.jociemckade.com/
Her fiction writing has received the Author / Ambassador at Library Journal Self-e Authors, Winner Queen of the West Reader Favorite Award, Amazon Bestseller - Historical, Double finalist in the Next Generation Indie Book Awards in the Mystery and Humorous Categories. Writing humorous cozy mysteries and romantic comedy, Jocie can find humor in most everything, even when she shouldn't. She lives in the Midwest on Dust Bunny Farm with her family.
Previous articleHow Are Readers Watching Book Trailers?
Next articleReader’s Entertainment Radio Presents Blue Saffire