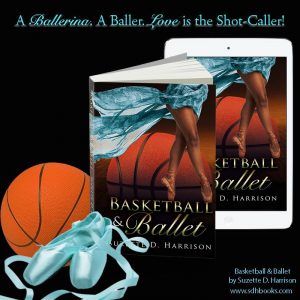 Basketball and Ballet by Suzette D. Harrison
Yazmeen Williams is a busy woman. The former professional dancer is a church Administrative Assistant by day and the mother of three-year old twin boys, always. What she isn’t, is interested in love thanks to a monster of an ex-husband who’s a danger to the well-being of her sons. When retired NBA player Tavares Alvarez enters her life looking “utterly orgasmic,” that disinterest is severely challenged as is her hold on celibacy. But he’ll need to gain her trust, or her phone number first. With Yazmeen, neither will come easily.

Tavares has had zero relationships, but more than his share of women. Now that he’s born-again, he’s no longer focused on the opposite sex. His attention is devoted to his five-year old daughter and being a venture capitalist. Meeting Yazmeen proves a delicious disruption. The attraction is instant, but clearly she’s disinterested. Tavares will need to work to secure her affection despite the drama caused by his unhinged “Baby Mama.”

Dive into this faith-filled, but sexy romance that will leave you rooting for Yazmeen and Tavares, laughing at their antics, and gasping at the actions of their questionably sane exes.

Jocie McKadehttps://www.jociemckade.com/
Her fiction writing has received the Author / Ambassador at Library Journal Self-e Authors, Winner Queen of the West Reader Favorite Award, Amazon Bestseller - Historical, Double finalist in the Next Generation Indie Book Awards in the Mystery and Humorous Categories. Writing humorous cozy mysteries and romantic comedy, Jocie can find humor in most everything, even when she shouldn't. She lives in the Midwest on Dust Bunny Farm with her family.
Previous articleReader’s Entertainment Radio Presents Blue Saffire
Next articleBook Lights Radio Presents Kristina Rienzi