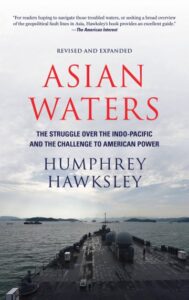 THE FRACTIOUS RELATIONSHIP between China and the United States will be a central issue for the coming decades, and no region is as hotly contested as the Indo-Pacific. At its heart is an intensifying rivalry between the autocratic and democratic systems of government marked by the disputed South China Sea where China has built military bases in open violation of international law. At stake is the survival of the current rules-based world order. In Asian Waters, award-winning BBC journalist and Asia specialist Humphrey Hawksley breaks down the tensions that he has followed throughout this vast and volatile region for years. He joins dots that include America’s rise as the predominant Pacific power to Sino–US trade wars, threats against Taiwan, war on the Korean peninsula, Japan’s role in protecting democracy in Asia, and much more. With vivid storytelling, concise history, and pointed arguments, Asian Waters is a must-read for anyone interested in global politics. With its clear analysis and powerful story-telling, Asian Waters has received high praise including on both sides of the Atlantic and from within Asia itself.

“With his solid, on-the-ground experience and incisive analysis derived from decades of first rate reportage, Humphrey Hawksley provides new ways of seeing and understanding the shifting balance of world power, a change of monumental significance for this century. Asian Waters seamlessly connects geography, history and great power intrigue across the entire Indo-Pacific region, increasingly the fulcrum of world history. His conclusions are surprising and often disturbing, but always based on the evidence. This book is a must-read.”

James Clad, Director, Asian Security Programs at the American Foreign Policy Council, Former US deputy assistant secretary of defense for Asia Pacific Security Affairs
“Humphrey Hawksley has long and rich experience of life in Asia, and has used this to inform this lucid, lively account of the frontier of Chinese aspirations – the region in which it sits. It is here that the true face of Chinese power is being revealed – the waters of Asia.

Hawksley masterfully pulls back the layers of history, old maps, and national pride that form the backdrop to one of Asia’s most dangerous flash points, the South China Sea. He argues convincingly that these disputed waters have become a litmus test of how far a rising China can push the boundaries of international law and still get away with it. Hawksley concludes with insightful suggestions about how China and the United States might learn to live together and what the disastrous stakes are for the globe if they clash.

Asian Waters plays a critical role in defining India’s importance in the evolving geo-strategic matrix. The author is an old India hand and Asian Waters contains a wealth of knowledge, skilfully portrayed in his thoughtful book. To understand the new Indo-Pacific region, Asian Waters is a must read.

‘Asian Waters’ is a timely, detailed and balanced examination of one of the crucial geo-political fault-lines of the twenty-first century.  Its insights and analysis accurately map the complexity of the situation in the Asia-Pacific region, the choices open to policy-makers and a range of outcomes that could lead to cooperation, confrontation or conflict.

“Humphrey’ s writing style is accessible even when his subject grows more complex, ranging from

geographic diversity to narration about history and politics. This book is a helpful primer to better

understand the tools available to those formulating the South China Sea policy. Whether it is navigating on the political waves in East Asia, or exploring the great power status, the book offers a generous insight.  Humphrey is a respected analyst, and he doesn’t disappoint here

“Hawksley’s Asian Waters breathes life into the well-worn subject of the South China Sea by painting a vivid and comprehensive picture of Asia’s maritime security. Asian Waters explores the perspectives of the key actors in the region, rendering a fuller understanding of the complex and multi-faceted security dilemmas in Asia. It is truly an impressive piece of work that is sure to inspire and engage readers.”

ABOUT THE AUTHOR:
Humphrey Hawksley is an author, foreign correspondent and commentator on world affairs. His work with the BBC has taken him to crises all over the world. His journalism has also appeared in most mainstream media in the U.K. and U.S., such as NPR, the New York Times and The Times of London. Her lectures and comments widely on Asia and international affairs at venues such as the Center for Strategic and International Studies in Washington, D.C., and the RAND Corporation in Los Angeles. He has presented award-winning BBC documentaries and is the author of international thrillers. His latest is Man on Edge of the Rake Ozenna series set on the US-Russia border.

Jocie McKadehttps://www.jociemckade.com/
Her fiction writing has received the Author / Ambassador at Library Journal Self-e Authors, Winner Queen of the West Reader Favorite Award, Amazon Bestseller - Historical, Double finalist in the Next Generation Indie Book Awards in the Mystery and Humorous Categories. Writing humorous cozy mysteries and romantic comedy, Jocie can find humor in most everything, even when she shouldn't. She lives in the Midwest on Dust Bunny Farm with her family.
Previous articleBook Lights Radio Presents: Robert J. Sawyer Talking SciFi
Next articleBook Lights Presents: Nina Crespo Talking Cowboys!