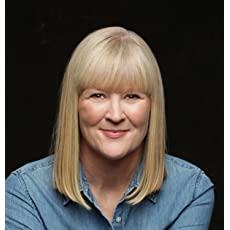 Thanks for inviting me to drop by!

Let’s begin by telling our readers a bit about you!

Let’s see…I’m a wife and mom and now a “Mimi”—and I have an enormous garden, and I play tennis. Quite a lot!

I live in the San Francisco Bay Area in a house that was once the ugliest house in town (really!) and is now a lovely home. And yes, writing is my full-time job and I still write in a laundry room.

While raising my four children, I freelanced for a number of magazines. Having kids…they’re the best grit for the oyster. I considered myself a magazine writer for twenty years, and then I took the plunge and wrote a novel. That was thirty-some books ago! It sounds like a straight line, but it wasn’t. It never is.

I’m an early riser and a very disciplined writer, so I try to hit my daily word count by ten a.m. For me, creative writing flows in the morning. It sputters and stalls in the afternoon. The same paragraph can take twice as long at three o’clock as it will at eight in the morning. Normally, I protect those early hours and save marketing and promotion tasks for later in the day.

What is your latest release?

My latest release is At Lighthouse Point, book 3 in the Three Sisters Island series. It’s a family drama set on a little remote island in Maine, where it always seems to be summer!

A visit to Bar Harbor, Maine, with my own dear sister. So many possibilities for story lines kept coming our way, especially as we took “ferries” (aka, tiny boats) to remote islands.

The basic story is about a dad who realizes that his three young adult daughters are growing estranged. Something has to change, so he buys the majority hold of an island. His daughters think he is losing his mind, but don’t count this dad out too quickly. There’s just something about an island…

Each sister has taken a turn as the main character in the three books, and in At Lighthouse Point, youngest sister Blaine finally gets her turn on center stage.

How about giving us a detail from your current release readers might not find in the book? Perhaps a juicy bit of back-story, or something only you know about a character?

I used a lot of flashbacks in the series, and there’s one singular moment in this novel that becomes a very dramatic turning point for Blaine—from a crippling depression to a place of hope.

That very scene with Blaine was not an easy one to write. I felt as if I had to tiptoe carefully, as there was a hint of the supernatural in it. I expected my editors to flag it, but they gave it the thumbs up.

Blaine has probably been the sister who has caused everyone the most frustration. She’s grown up in fits and starts. She’ll make a little progress, then sabotage herself. I studied the effects of birth order to feel empathy for her. In At Lighthouse Point, she faces her insecurities and, for the first time, doesn’t cut and run.

Probably…Peg Legg, the owner of the Lunch Counter. She’s the kind of person we all wish we had in our life, looking out for us.

All writers are readers. Have any authors influenced how you write?

The author I reach for when I’m going through a hard stretch is always Catherine Marshall—but her non-fiction, not her fiction. My grandfather knew Peter Marshall, Catherine’s first husband. The dynamic spiritual life of that couple, displayed in their books for all to read, never fail to give me guidance and direction.

Great question! I think The Quieting. It’s a window into a little known part of the Old Order Amish—the ministry.

Probably not an actual talent, but I do love to try new things, and I always jump in at the intermediate level rather than the beginner level. So, here’s my newest endeavor: making iced sugar cookies. They make terrific gifts!

Best advice for an aspiring writer?

As you write, fiction or non-fiction, keep this one phrase in mind to pull the reader forward: What happens next?

Thanks for hosting me today! I love to hear from readers. You can always find me through my website: www.suzannewoodsfisher.com  I answer my own mail, usually within 24 hours. Readers are the best reason to write!

Thank you so much for joining us today. Readers, here’s a look at Suzanne’s latest release: AT LIGHTHOUSE POINT 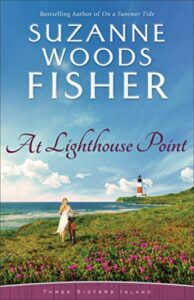 Blaine Grayson returns to Three Sisters Island with a grand plan—to take Camp Kicking Moose to the next level. Her dream starts to unravel when she discovers Moose Manor’s kitchen has been badly remodeled by her sister, Cam, who doesn’t know how to cook. Added to that blow is the cold shoulder given by her best friend, Artie Lotosky, now a doctor to the unbridged Maine islands.

As old wounds are opened, Blaine starts to wonder if she made a mistake by coming home. Little by little, she must let go of one dream to discover a new one, opening her heart to a purpose and a future she had never imagined.

YOU CAN PURCHASE AT LIGHTHOUSE POINT AT:
BAKER PUBLISHING
AMAZON

Bestselling author Suzanne Woods Fisher invites you back to the coast of Maine for a story that reminds you to release what doesn’t matter and cling to what does: faith, family, and friendships.