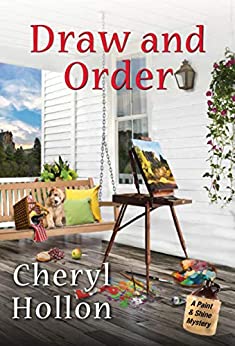 DRAW AND ORDER BY CHERYL HOLLON

For her latest excursion, Miranda is thrilled to take a close-knit group of rock climbers, the Risky Business Adventurers, up the challenging Battleship Rock Trail to paint and sample moonshine. But the outing is cut short when they discover a skeleton near the trailhead. Even more startling, the bones belong to Howard Cable, Miranda’s cousin…and a former classmate of the Risky Business group.

The sheriff chalks it up to a hiking accident, but Miranda isn’t convinced that Howard, an experienced woodsman, died within sight of a well-marked trail. So, with the help of Ranger Austin Morgan, Miranda sets out on her own investigation and discovers that the Risky Business group is keeping plenty of secrets. But is one of them hiding the truth about Howard’s death?