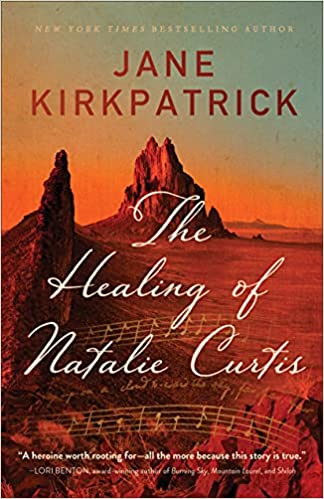 A SNEAK PEEK AT THE HEALING OF NATALIE CURTIS BY JANE KIRKPATRICK AND A LOOK BEHIND THE WORDS WITH THE AUTHOR.

Can a Classically Trained Musician Repeal the Code of Offenses?

“Kirkpatrick’s stirring biographical novel honors its real-life inspiration and the relevance of her historical journey.”—Booklist on Something Worth Doing

Mich.—New York Times bestselling author Jane Kirkpatrick has been praised for her stunning novels that help readers experience the lives of notable women in history. In her newest work, The Healing of Natalie Curtis, Kirkpatrick weaves a lyrical tale of a classically trained pianist and singer who discovers the healing power of music not only in her own life but also as refuge for a hurting nation.

Natalie Curtis was set to debut with the New York Philharmonic orchestra. But a breakdown right before her performance left her guilt-ridden and isolated. Since that time, she has failed to recapture her joy of music. In 1902, her brother George invited her to join him in the West to find healing. As she immerses herself into her new life, she is introduced to several Native American tribes and becomes mesmerized by their haunting melodies, rhythms, and stories and believes all Americans should have the opportunity to hear them. But she soon finds out that a Code of Offenses prohibits Natives from singing, dancing, or even speaking their language.

Natalie is determined to find a way to revoke the Code. Her journey ultimately leads her to a meeting with President Teddy Roosevelt where she pleads her case to preserve the music and culture of America’s Indigenous people. Will her plans succeed and provide a new future not only for her but also for the many tribes scattered throughout the West?

Kirkpatrick states, “I work at having a seamless blend of fact and fiction as I write about historical people.” She accomplishes her objective in this powerful story that will keep readers captivated to the very end.

You are a New York Times and CBA bestselling and award-winning author of more than forty books. When and why did you first begin writing?

I wrote what I called “wretched little poems” as a child. But I didn’t write for others to read until my husband and I followed our hearts in the 1980s and moved to Starvation Lane to build a new life seven miles from our mailbox. My first book, Homestead, came from that experience and three years later came my first novel based on the life of a historical woman.

Give us a brief summary of your newest novel, The Healing of Natalie Curtis?

debut. In 1902, still hurting, her brother invites her west where she falls in love with Native music but learns that Indigenous people are breaking the law when they sing or dance. Natalie uses her influence with President Theodore Roosevelt to get permission to record their music in order to preserve it. She also hopes to break the Code of Offenses that keeps Native people from sharing their music and arts with other Americans. In the process of working with others, the music helps heal her heart as well.

When did you first learn about Natalie Curtis?

Several years ago, I read a book by Lesley Poling-Kempes titled Ladies of the Canyon about four remarkable women from the East who became enamored with the West and who both changed it and were changed by it. Natalie was one of those ladies.

What intrigued you most about her life?

I wanted to answer the question, How did this protected, wealthy woman find herself spending years traveling by horseback and wagon with her brother to record Indian music in hogans and teepees and government schools, and did recording and writing about the music really make a difference in the lives of tribal people?

You have a background in the mental health profession. How do you think this helped you when you wrote about Natalie Curtis?

I spent a fair amount of time exploring what might have been the reason for her breakdown, and I could apply what I’ve learned by working with men and women who are hurting to the depths of their souls and what will bring them peace.

Your book references the US Code of Offenses. Can you explain what this was and how this impacted Native Americans?

The Code was passed in 1883. Its original intent was to identify what crimes would be prosecuted by the federal government on reservations. But it quickly went beyond this to Indian agents identifying what was needed to help Indigenous people assimilate. So they made it a crime to wear long hair, to sing songs, to attend or participate in religious ceremonies, and to speak Native languages. Really, to destroy their culture. Natalie wanted to walk beside Indian people to destroy the Code. She began the work, but it wasn’t eliminated until the 1930s.

Can you explain how music became a catalyst for healing both in Natalie Curtis’s life as well as in the lives of Native American tribes throughout the West?

When Natalie first heard a Yuma elder sing a song (violating the law to do so), Natalie was

mesmerized by the complexity and beauty. And when she learned that such songs were being

suppressed, she felt it was a great loss to all of us that such an important part of American history would be lost. When she saw that music brought peace to people being persecuted, she realized that her own love of music didn’t have to be silenced, that it too could bring her healing and peace. Walking beside Native people in preserving the music became a melody that Natalie allowed to lift her own spirit and gave her courage to approach the halls of power to change the law.

What do you hope readers will gain from reading The Healing of Natalie Curtis?

That the arts—music especially—can heal a broken spirit, and that walking beside others in

understanding can give us a purpose that helps heal others and ourselves.

You have stated, “I work at having a seamless blend of fact and fiction as I write about actual historical people.” What sparked your interest in retelling stories of notable women in the West?

I wanted to write biographies of overlooked pioneering/historical women, but I couldn’t find enough factual material. My first venture was about Jane Sherar, a young wife who was beloved by the same tribe that I was working for in the 1990s. I found lots of details about her husband, father, and brother, but little about her. So, I ventured into fiction to tell her story. I interviewed descendants and tribal members to tell a story that I hoped would inspire. Virginia Woolf once wrote that “women’s history must be invented both uncovered and made up.” That’s what I hope I do.

How do you choose which woman you are going to write about?

They choose me! Sometimes they pop up out of a footnote or they show up in little museums around the country (I stop at all those little museums). Often other people will tell me about their ancestor. I’ve written about three of the pioneer women that are among six memorialized, along with 156 men, at the Oregon State Capital. Sometimes, as with Natalie, I read a nonfiction book and want to explore more about that woman.

I’m writing about a Montana woman, the great love affair she has with her husband (an Indian agent on a reservation), and her transformation from people-pleaser to advocate on behalf of one Indian girl.

Readers can find me at https://www.jkbooks.com, on Facebook aT https://www.facebook.com/theauthorjanekirkpatrick, or on Bookbub and Goodreads. 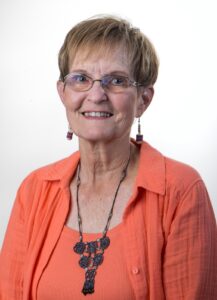 Jane Kirkpatrick is the New York Times and CBA bestselling and award-winning author of forty books, including Something Worth Doing, One More River to Cross, Everything She Didn’t Say, All Together in One Place, A Light in the Wilderness, The Memory Weaver, This Road We Traveled, and A Sweetness to the Soul, which won the prestigious Wrangler Award from the Western Heritage Center. Her works have won the WILLA Literary Award, the Carol Award for Historical Fiction, and the 2016 Will Rogers Gold Medallion Award. Jane divides her time between Central Oregon and California with her husband, Jerry, and Cavalier King Charles Spaniel, Caesar. Learn more at www.jkbooks.com.