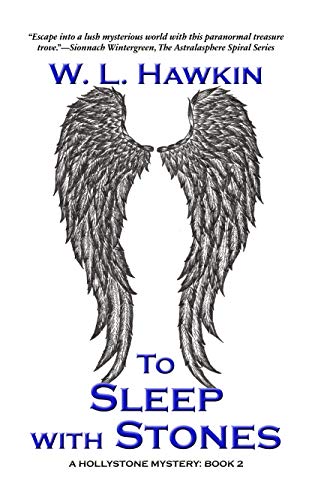 To Sleep With Stones (A Hollystone Mystery 2) by W.L. Hawkins

The discovery of a powerful Egyptian artifact lands a man in prison for murder, and his only hope rests in the Wicca Priest he has befriended, Estrada, who must solve the crime before it’s too late in author W.L. Hawkins’s novel, “To Sleep With Stones”, the second book in the Hollystone Mystery series.

“Estrada scrutinized the tats, wondering how far the ink extended beneath the worn leather kilt, and just how painful it would be to have your genitals tattooed. He knew about ink—wore the black lacy wings of an angel on his back. Her feathers extended across his shoulders and down his glutes. That ink had broken more than his skin. “

When a renegade archaeologist discovers an ancient Egyptian

artifact in Scotland, Dylan McBride’s world implodes. Imprisoned for murder, he summons his friend, the Wicca Priest, Estrada, to solve the crime and set him free. Unable to turn down Dylan’s cry for help, Estrada abandons his melancholy lover in Canada where he gets targeted by a vicious vampire.

Estrada faces his inner demons. After playing vampire for years, Michael Stryker confronts a real vampire in a life-changing showdown. And, sweet, virginal, Dylan McBride, faces his greatest fears in one of Scotland’s most terrifying prisons. Who will survive?

A fast-paced murder mystery spiked with edgy urban fantasy, that opens portals into the realm of witches, faeries, and vampires.

I absolutely and truly love this series! It speaks to me on so many levels, from my fascination and interest in Wicca and my passion for mythology and history to the chilling fantasy and murder-mystery elements of the narrative. The suspense and corruption within the police department that Estrada faces early on in the narrative adds a human threat element into the more magical and historical nature of the narrative, keeping the story balanced between grounded realism and magical and historical fiction.

The characters were so enjoyable to watch grow and develop on the page. The whole narrative plays out like an HBO show waiting to be developed, combining elements of LGBTQ+ and adult storytelling into a complex character study of those who seek the answers hidden within the most complex systems of our universe, from historians and archeologists to Wiccans and Pagans. Estrada is a complex character, and readers won’t be able to help getting invested in his story as he balances his desire to protect and help his friends and the innocent with his personal romance and personality developments.

A memorable, fantastic, and action-fueled fantasy murder mystery, author W.L. Hawkins’s “To Sleep with Stones” is the perfect second book in the Hollystone Mystery series. The story’s inclusion of everything from faeries and corrupt cops to magick practitioners and the gods themselves, the brilliant mythos that the author incorporates into the narrative, and the cliffhanger ending with particular characters will have readers eager to learn more and get into the rest of this amazing series. If you haven’t yet, be sure to grab your copy today!