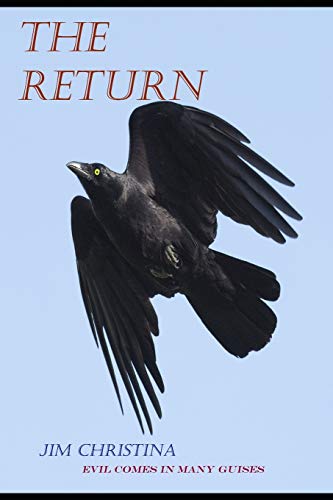 The Return By Jim Christina

EVIL COMES IN MANY GUISES. . .

When the Deacon is shunned by the Southern Baptist Church in Dothan, Alabama for killing a man, he makes his way to the Arizona/New Mexico border where he has collected a ragtag bunch of cutthroats and rustlers that are very successful at what they are doing until the Hunter and Jeff Stryker are hired to hunt the Deacon down and bring him to justice. But, the Deacon is not one to go easily and opens his own bag of tricks which start and end in murder. Now the Hunter and Jeff Stryker have been asked to help out Bountiful Jim’s last remaining relative, Lucien Ledoux in St. Landry Parish, Louisiana. The Dark Angel has returned but this time in the guise of the Preacher, and many times stronger than before, leading a band of pirates determined to take the entire parish for themselves and Jim’s cousin, Lucien is the last hold-out. The crescendo will surprise, and the action will keep the reader going.

Jim Christina was born into an Air Force Family in 1949. Living all over the world before finally landing in Del Mar, California.

While managing a territory in Washington and Oregon, Jim began composing music and writing the lyrics. Forming a band in Tacoma, Washington, “Sundown”, Jim’s music and the melody of Sundown played up and down the state before Jim moved to California.

For years a character had been rolling around in his mind and in 2008, the character became the Hunter and the series was born. They are stories of an aging man hunter and his protege’ in Arizona in the last half of the nineteenth century.

And, listen in every Thursday evening at 7 PM pacific time for “The Writer’s Block” on www.latalkradio.com/content/writers-block