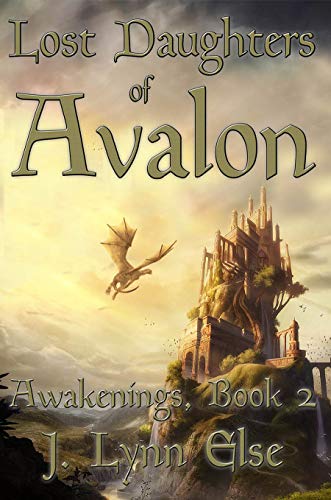 Lost Daughters of Avalon
The series continues with a wondrous sequel by Award-Winning historical fiction author, J. Lynn Else

After not hearing anything from their knights in Avalon for weeks, the horrible Questing Beast breaks through into the world and attacks Genie, Beth, Mei, and Whit. Their magic stirs to stop the monster, but Beth’s attempts fail. Help from Avalon arrives just in time to remove the curse and reveal a woman inside the beast who claims to be Genie’s biological mother. The four friends learn their knights had gone missing, along with one of Avalon’s queens, Viviane. An ancient evil runs amok in Avalon and the people blame the four friends, claiming they released Merlin to destroy their world. To clear their name and rescue their knights, the four friends must once again risk the dangers of Avalon. Genie, Beth, Mei, and Whit must pull together and learn to combine their powers of air, water, earth, and fire to rebalance the world they might have thrown into chaos. If they fail, the worlds of Avalon and Earth could destabilize and end life as they know it.

J. LYNN ELSE is a Minnesota award-winning author who’s self-published two historical fiction novels set in ancient Egypt, “The Forgotten: Aten’s Last Queen (2013),” which was named an Indie Editor’s Choice book for 2016 by the Historical Novel Society, and “The Forgotten: Heir of the Heretic (2016)” as well as a sci fi novella “Strangely Constructed Souls (2018).” Through Inklings Publishing, she’s authored “Descendants of Avalon” (2018), “Lost Daughters of Avalon” (2019), and “Prophecy of Avalon” (2021).” Her short story “The Girl from the Haunted Woods,” won 2nd place in the “Journey into the Fantastical” Anthology contest. In 2021, she became the Indie Reviews Editor for the Historical Novel Society. She believes in unicorns and practicing random acts of awesome.