Search
Home Blog BEHIND THE WORDS WITH AUTUMN LYTLE 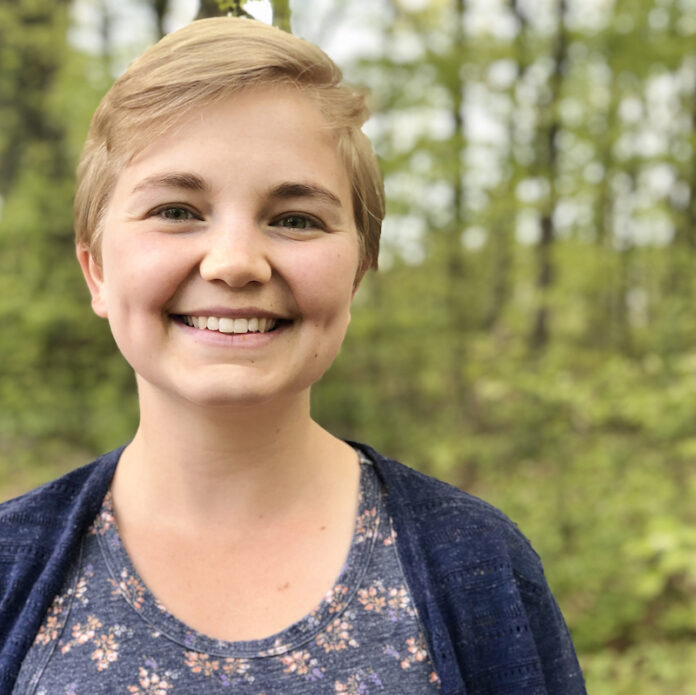 Behind the Words welcomes author Autumn Lytle to our blog today. Autumn is a debut author releasing her first novel, ALL THAT FILLS US.

Welcome, Autumn, we’re excited to have you on Reader’s Entertainment.

I’m honored to be here!

I considered myself a Michigander for many years until last August when my little family moved to Seattle so my husband could get his MBA at the University of Washington. It’s always been my dream to live in the PNW and so far it’s truly lived up to the hype! My husband and I are high school sweethearts (we met in our pre-calc class and both received our lowest grades ever. Almost like we were distracted or something…). We have a silver 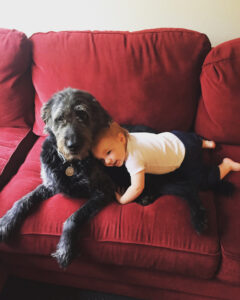 labradoodle that everyone mistakes for a mini-Irish wolfhound and an 18-month-old son who has a passion for construction vehicles and veggie straws. I have the great pleasure of being home with him full time and exploring the city with him by my side (especially construction sites). I love running long distances (17 marathons under my belt and another one coming up in a couple of weeks), writing long stories, and making elaborate platters of food (although that was more of a pre-baby hobby!).

I’ve been writing since the sixth grade when I had a lot of big feelings to get out and nowhere to put them. It seems like ever since then I’ve had a project to work on; whether it’s a little book for my dad for Christmas or one of my countless novel ideas. I’ve never been one to write without a clear purpose, so always having a project with a goal in mind is key. I work on writing projects during my son’s naptime and considering he can nap anywhere from 45 minutes to three hours, I have varying degrees of success each day!

Tell readers what your typical writing day looks like?

This might be embarrassing, but whenever I’m stressed I take a deep breath and envision what my dream writing day would look like. I’m usually on the Isle of Skye in Scotland in a little cabin with a view of rolling green hills speckles with fluffy sheep and the brooding Atlantic Ocean. True to my introvert-heart, I’m alone in this little cabin (okay, my dog can come along as long as he doesn’t bark at the sheep). There’s always a giant mug of tea and a cozy sweater involved too… Maybe one day. Currently, my goal is just to write a page every day I can (some days are more successful than others). 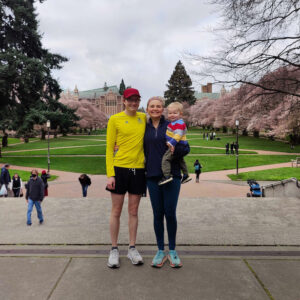 I would love to! There’s a young woman named Mel Ellis who knows her eating disorder is ruining her life. Even though everyone tells her rehab is her best option, she can’t bring herself to go. So, she sets off on a thru-hike from Michigan to Mt. Rainier, Washington as a last-ditch effort to make her story worth telling. During her journey, she meets strangers that help her and confronts people from her past that can no longer be ignored. The greatest challenge though is overcoming her own dark thoughts to find peace in the life and the body she’s been given.

The idea for this book came to me at 4 a.m. one morning. I love that the Christian Fiction genre is starting to tackle more real and difficult topics, but I knew there was a hole when it came to talking about the real-life struggles of living with an eating disorder. I aspired to use my own experiences to fill in the gap, especially since that’s a time in my life where I can clearly point to returning back to God and I thought it had the potential to help others as well. But I knew I couldn’t just write a story about someone experiencing an eating disorder. The problem with mental health issues and novels is that not much happens when a person is dealing with a mental health issue. They are so busy internalizing everything there’s no chance for a plot to develop. So, I wanted to have a physical representation of the healing journey, and that’s where the thru-hike came in.

Mel, the protagonist, for sure. She’s practically me: sarcastic, emotional, big-hearted, introspective, and broken. I used many of my own self-destructive thoughts to give voice to the struggles Mel is facing. Her journey isn’t the same as mine, but her thoughts are very familiar.

Well… That’s more or less asking if I would be friends with myself. I think it would be very difficult for the me I am now to be friends with the Mel we encounter at the beginning of the book. She is such a bad place and I wonder if her struggles are too personal for me to be any help to her as a friend. Or maybe that makes me the perfect friend for her? I’m not sure, but the Mel at the end of the book and I would get along famously. We practically are friends already, considering how often I talk to myself!

The beginning of the book was brutal. I had to go back and explore dark thoughts I have been trying to avoid for years. I would spend an hour or so writing, then be sullen and moody the rest of the day without realizing why. It was hard for me, but especially those who had to deal with me (sorry, family and friends!). But the cool part was I got to follow Mel’s progression. As I journeyed with Mel towards healing, I would be blown away remembering the grace and love that would so often sweep me up during my own recovery.

Did you model a character after someone you know?
Like I mentioned above, Mel is totally modeled after me. I knew I wanted to write a story about recovering from an eating disorder and I didn’t know a better way to do it than to use my own thoughts and feelings. Write what you know, right?

If you’re planning a sequel, can you share a tiny bit about your plans for it?
Definitely not planning a sequel! I want the readers to craft their own ideas about the progression of healing after they finish this book. I feel like writing a sequel would take away that experience.

In the book, the way Mel’s mother treats her is a large contributing factor to how little self-esteem she has. But my own mother was the exact opposite. During the worst parts of my own eating disorder, my mom and I would write to each other in a journal every day. I would go to bed and the journal would be waiting for me, filled with words of love and encouragement from my mom. Then I was free to spill on the page all the dark thoughts and obsessions that had been eating away at me all day and I would slip the journal back in her room. There was never any judgement, never any belittling or shaming. In All That Fills Us, I use many of the female characters Mel meets on the road as examples of all the roles my mom stepped into when I needed her most. 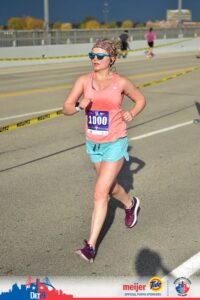 stories that feel intimate and conversational and simultaneously keep my interest and hope alive. Rainbow Rowell and Fredrik Backman are my two best models of this. Nobody writes dialogue like Rowell and Backman walks the balance beam of diving deep into difficult topics while leaving his readers crying tears of happiness and hope by the end of each novel. If I’m ever half as good as either of those writers, I would like that fact commemorated on my tombstone.

Maybe one day when I’m in my cabin by the sea I can come up with some really cool writing rituals… I imagine it would be something like meditation or yoga before a writing session and maybe jotting down notes with an ink quill on parchment.

The Dearly Beloved by Cara Wall. I mean, it does have 24,000 reviews on Goodreads so I suppose it’s not that under-appreciated, but no one I recommend it to has ever heard of it. It’s the best novel about faith I’ve ever read. Hands down.

I’m crazy good at convincing people to sign up, train for, and run long distance races. My friends can all vouch for me on that one. I’ve also made a few temporary enemies that way, but they always come around! 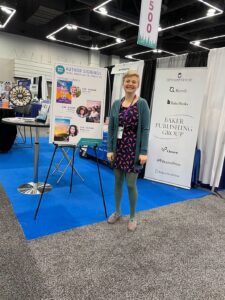 A large bowl of popcorn (made in a popcorn popper, NOT the microwave. That’s a crucial distinction) and a modest bowl of frozen chocolate chips (if you’re not keeping your chocolate chips in the freezer, you’re not doing it right).

If I go too long without writing anything (a couple days or more) it’s really difficult for me to start back up again. I’m not the type of writer that can produce half a book in one session. I have to work in little bits over a long period of time, but as long as those little bits are consistent, I can be extremely productive. It’s when I take some time off and then somehow convince myself that all writing is meaningless and I’m terrible at it anyway so why bother? Needless to say… It’s best for me to always be writing a little.

I haven’t done all that many interviews, but I love the question!

Why is your name Autumn… Weren’t you born in January?

You can thank my parents for that one! They were actually planning on naming me December (Why, parents? Why?) until my uncle told them that if he had a daughter, he would name her Autumn. They quickly snatched up the name and my uncle went on to have five boys. Everyone won!

Thank you very much for joining us today, Autumn, and congratulations on your debut book release!

Here’s look at Autumn’s debut release ALL THAT FILLS US: 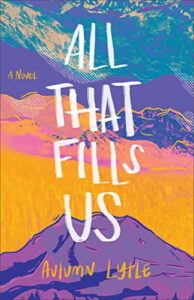 Mel Ellis knows that her eating disorder is ruining her life. But she can’t bring herself to go to rehab so someone else can fix her mess. Broken and empty in more ways than one, Mel makes one last-ditch effort to make hers a story worth telling. She will walk her own road to recovery along the lesser-known trails of the North American wilderness.

Though she is physically and mentally unprepared to face the difficulties that lay ahead, she sets off on foot from Grand Rapids, Michigan, and heads toward Mount Rainier National Park in Washington State. During the long journey, she meets strangers with their own stories, as well as ghosts from her past who can no longer be ignored. But though the land she travels threatens her success at every turn, it’s her own dark thoughts she’ll have to overcome in order to find peace in the life and the body she has been given.

With pitch-perfect timing and delightfully witty self-awareness, debut author Autumn Lytle masterfully leads readers on a journey down the hard path toward healing.